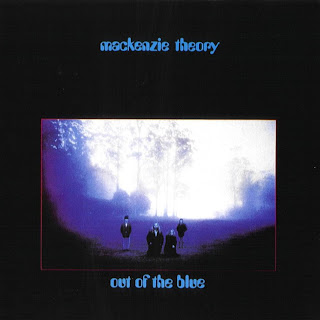 My first introduction to MacKenzie Theory was when I heard their live version of 'New Song' on the Sunbury 73' album. How different were they to the mainstream Aussie Rock at that time! Their jazz fusion influence from the likes of Mahavishnu Orchestra and Jean-Luc Ponty were evident, yet they still had their own flavour of jazz / rock blended into some really mesmerizing music. Sudden time signature changes along with guitar-electric viola interplays adding a unique feel to their music. It didn't take me long to find their "Out Of The Blue" album on the record shelves and finding it to be a Mushroom release was cream on the cake. The album cover depicting the band members on a ghostly misty morning (shot by Graeme Webber in the countryside somewhere around Melbourne) only adds to the perception that "Out Of The Blue" was not going to be your average run of the mill Aussie LP. It still remains today as one of my favourite 'avante garde' records in my collection.
MacKenzie Theory formed in Melbourne, Australia in 1973, centered around the guitar of Rob MacKenzie and the viola of Cleis Pearce. At the time there was a very active music scene in Australia with many bands experimenting mainly in the blues/rock direction. However there was a growing awareness of the fusion, and in particular Weather Report and The Mahavishnu Orchestra. It is from this music that MacKenzie Theory and other bands such as Ayres Rock, drew there influences. 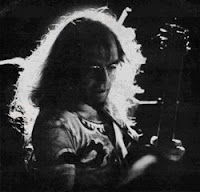 They, however, created a style that was unique, no guitar pyrotechnics, but rather etheral chords behind and Pearce's electric viola. The use of a viola instead of a violin was inspired, the deeper tone better suited the music than the high pitch of a violin. MacKenzie was the real leader of the band and the sound centred on his spacey guitar style and very open compositions. Pearce's viola adds a colour that is perfect for the music.
.
They made just 2 albums to a muted commercial response, available only in Australia and long since deleted. First was "Out Of The Blue" in 1973, was recorded live in the studio, a cheap way of recording an album. Despite this, it worked, as it caught the spontaneity of the band and showed off their jazz credentials. Following the first album they toured around the country, trying to summon some interest, but didn't really succeed. When the time came for the second album, it was clear that the band was about to fold, hence the title "Bon Voyage". Again it was decided to record live, this time in concert. A keyboard was added to the mix with a new rhythm section. The preference for long improvised instrumentals is evidenced by the fact that album comprises of just 4 tracks and I suspect that these are edited. MacKenzie's love of jazz can be seen in the title of the last track, 'Supreme Love', an obvious play on John Coltrane's 'A Love Supreme'. There were a few musicians at that time playing the violin in fusion, most noteably, Jerry Goodman in The Mahavishnu Orchestra, Jean Luc Ponty and Michal Urbaniak. Pearce sounded like none of these. Likewise, no one sounded like MacKenzie on guitar and it is this that creates the unique sound and makes the band so interesting. Futhermore, their excellent musicianship and improvisatory skills make this a forgotten classic.
The band had ceased to exist by the time the album came out and from the cheap cover one assumes that label boss, Michael Gudinski (founder of Mushroom records), couldn't see a profit. Both MacKenzie and Pearce disappeared from the scene completely and as far as I am aware, have not played since (Extract from Milesago).
This rip was taken from Vinyl at 256kps and includes full album artwork. I am also including two live tracks taken from 73/74 Sunbury concerts as bonus tracks ripped at 160kps.
.
Track Listing