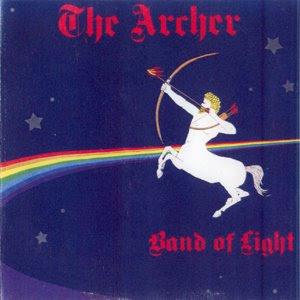 Band Of Light were formed in October 1972 by Phil Key (vocalist and rhythm guitarist from legendary New Zealand band The La De Da’s). Ian Rilen (later a key member of both Rose Tattoo and X) replaced Peter Roberts (also ex-Freshwater and La De Da’s) on bass after just 3 gigs. Master slide guitarist Norm Roue (who had come from Sydney band Gutbucket) and experienced drummer Tony Buettel (from Bay City Union, Levi Smith's Clefs, Fraternity and Band Of Talabene) completed the line-up.
Key’s first mission was to ensure that Roue’s stinging slide technique was put to good use. If you ever wondered what a nascent Rose Tattoo may have sounded like then this is a good place to start: on a good night, Roue could be matched with the likes of ‘Sleepy’ Greg Lawrie from Carson and La De Das’ Kevin Borich as one of the best slide players in the country, and at the bottom end, Rilen and Buettel always kept the rhythm firm and funky. Band Of Light immediately established a slow, heavy blues style dominated by Roue's stinging slide work. Key also introduced a quasi-religious philosophy into the band's lyrics that espoused racial equality, social justice and spiritual harmony.
The band worked consistently on the Sydney and Melbourne pub/festival/dance circuits, alongside other staple acts of the day like Billy Thorpe and the Aztecs, Carson, Coloured Balls, Chain, Madder Lake and Buffalo. 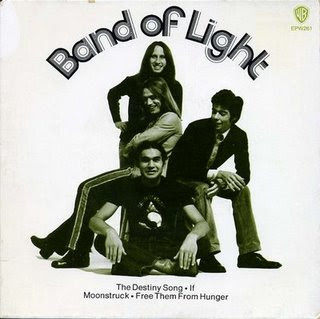 The band scored a national number 18 hit single in July 1973 with the infectious boogie rocker "Destiny Song"/"Over B" and later released their first album on the WEA label “Total Union”. The album was mostly standard hard rock, slow 12-bar blues and boogie, but the best tracks revealed Band Of Light to be an energetic and funky rock band. The second single "Free Them From Hunger"/"The Cat" in August and the non-album “Moonstruck"/"If" in November failed to chart. Roue, Rilen and Buettel all left Band Of Light in mid-1974. Roue went on to join Buffalo, Rilen helped form Rose Tattoo in 1976 and Buettel went into production work. Key was ready to record the band's second album and called in Billy Williams, previously from Classic Affair, to play bass and Danny Davidson, from Tamam Shud and Kahvas Jute, to play drums, in order to complete the album.
Released in 1974, the album "The Archer" had a much drier sound than the debut and failed to chart. The single "The Archer, A Sagittarian Rhapsody"/"Silus The Sun" was not successful. Ray Vanderby on keyboards and Eddie Hansen, from Ticket, on lead guitar, filled out the basic three piece line-up for live dates, but by the end of 1974 the band had broken up.
Although “Total Union” has been re-released on CD by Aztec music, “The Archer” has remained as a long lost Aussie classic album from the 70’s and therefore deserves a place here at Rock On Vinyl.
.
"The Archer" has been ripped from Vinyl at 256kps and includes full album artwork and 3 bonus tracks.
.
Tracklisting:
01 - The Archer
02 - Our Reason For Being
03 - Silis, The Sun
04 - The Seeker
05 - The Invitation
06 - My Black Swan
07 - Indiogo Heavens
08 - Bread and Wine
Bonus Tracks
09 - Messin' With The Kid (Live at Sunbury)10 - The Destiny Song (GTK 1973)11 - Over B (Instrumental B-Side Single)