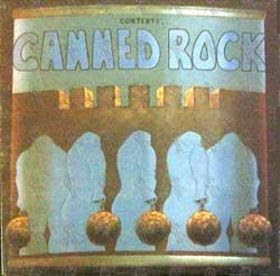 Canned Rock was a live compilation album on the Alberts label, recorded at Sydney's Parammatta Gaol in 1979. The album was dedicated to the National Body of "the International Year Of The Child" fund. All profits made went to Australian children in need. The initiative to form a "Prisoner's Concert Committee" was inspired by George Crawford who also takes on the role of MC along side Donnie Sutherlan & Rusty Nails.
The Tatts do great versions of "Bad Boy For Love" & "Rock 'n' Roll Outlaw", and Borich pulls out all the stops on two of his better known songs "Snowball King" & "Bellhop Blues".
There's some rare tracks from the woefully underrecorded bands Dallimore (ex Redhouse) & Feather (post Swanee), two more by a little known band called Machine who include two former members (guitarist Steve MacKenzie & keyboardist Alan Blackburn) of New Zealand band Airlord. 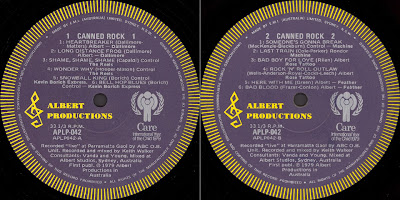 Finally for something different to the hard rock onslaught, there are two tracks from the then emerging 'new wave' band 'The Reels', but seem a little out of place on this occasion. Standout tracks for me would have to be the hard hitting tracks by Feather and Borich is in fine form along side his Express members Tim Patridge and John Annas. There is some live atmosphere in these recordings but not what you would expect from a crowd of inmates and prison officers!
Rip taken from Vinyl at 320kps with full album artwork (thanks to Micko at Midoztouch)
.
Track Listing
01 - Dallimore - Heartbreaker
02 - Dallimore - Long Distance Frog
03 - The Reels - Shame, Shame, Shame
04 - The Reels - Wonder Why
05 - Kevin Borich Express - Snowball King
06 - Kevin Borich Express - Bell Hop Blues
07 - Machine - Someone's Gonna Break
08 - Machine - Last Train
09 - Rose Tattoo - Bad Boy For Love
10 - Rose Tattoo - Rock 'N' Roll Outlaw
11 - Feather - Here With Me
12 - Feather - Bad Blood
.
Canned Rock Link (74Mb) REPOST
.
Posted by AussieRock at 7:37 PM