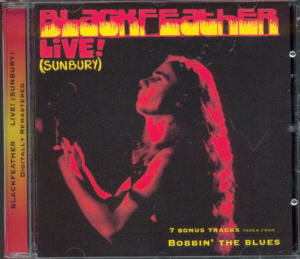 Blackfeather was an Aussie rock group in the 1970s. Formed in 1970 they went through a number of line-up changes until disbanding in 1983. Neale Johns was lead vocalist and songwriter. Their major hits were "Seasons of Change" and "Boppin' the Blues". "Boppin' the Blues" was a #1 hit in Australia in October 1972 for the band. The line-up for [Mark I] Blackfeather's 1971 album 'At The Mountain Of Madness' was John Robinson (also of the bands Duck and Dave Miller Set), Alexander Kash, Neale Johns and Robert Fortescue (also of Chain).
'Mark II' Blackfeather, led by Johns, with Warren Ward (bs), Jim Penson (dr), guitarist Zac Zytnick (ex-Tamam Shud) and pianist Paul Wylde. Zytnick left the new band in December (replaced by guitarist Billy Taylor (ex-Flake), followed by Penson at the start of 1972. By now the Blackfeather sound had changed dramatically -- the new material was simpler and rootsier, with Wylde's piano -- he played an electrically-amplified acoustic upright piano -- now the central feature. In July they released a new single, "Boppin' The Blues" / "Find Somebody To Love". The A-side was a rollicking makeover of an old Carl Perkins number, with Wylde's boogie-woogie piano to the fore.
.

Since they were between drummers at the time, the single was actually cut with Aztecs drummer Gil Matthews. Drummer Trevor Young joined temporarily just before it came out. It became Blackfeather's biggest hit, reaching No.1 in August 1972. It did massive business and is now the song that they are probably best remembered for. Young and Taylor left soon after. Young was replaced by Greg Sheehan.

The wizard-hatted Paul Wylde performs
his keyboard magic in 1972
.
Taylor wasn't replaced, and Blackfeather remained a four-piece for the next few months. At a time when the electric guitar was still the primary rock instrument, Blackfeather's new piano-bass-drums lineup was quite a radical departure (although one can only pity the poor roadies who had to lug Wylde's piano from gig to gig!) This lineup recorded the second Blackfeather LP, the Howard Gable-produced live album Boppin' The Blues, recorded at gigs at Melbourne Town Hall and the Q Club in September, and released in December 1972. 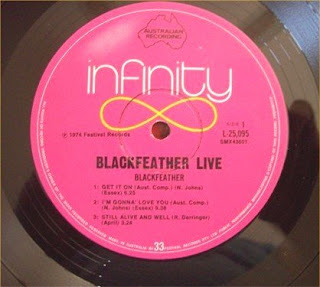 The next major change was when Paul Wylde quit at the end of 1972. He was replaced by two guitarists, Lindsay Wells (ex-Healing Force) and Tim Piper. Blackfeather returned to the harder, guitar-based style of the first album. They perfomed at Sunbury '73 in January and their set was recorded and released the following year as a live LP; with one track ("I'm Gonna Love You") also featured on Mushroom's inaugural release, the triple-album recording of the concerts, released in April. Their third single, a version of Little Richard's "Slippin & Slidin' " had been released February 1973, by which time Sheehan had quit. He was briefly replaced by John Lee, but the group only lasted a short time longer, splitting in April, after which Lee moved on to the newly-formed Dingoes.
The RIP included here is a compilation of the original LP and some of Blackfeather's (Side A/B) singles and a rare live recording of the Stone's hit "Gimme Shelter" from the legendary ABC show 'GTK' , as bonus tracks. Some album artwork is included.
.
Track Listing
01 - Get it On
02 - I'm Gonna Love You
03 - Still Alive and Well
04 - Slippin and Slidin'
05 - a) Boppin' The Blues b) Let's Twist Again c) I Just Love To
[Bonus Tracks]
06 - Gimme Shelter (Live GTK 1971)
07 - Boppin' The Blues (Single A-Side)
08 - Slippin and Slidin' (Single A-Side)
09 - Fly On My Nose (Single B-Side)
10 - Gee Willikers (Live)
.
Band Members:
Neale Johns (Vocals)
Linsey Wells (Guitar)
Tim Piper (Guitar)
Warren Ward (Bass)
Paul Wylde (Piano)
Jim Penson (drums)
.
Blackfeather Link (65Mb) REPOST
.
Posted by AussieRock at 11:21 PM