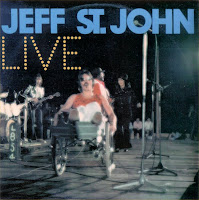 Soul-styled rock singer Jeff St John (born Jeffrey Newton in Sydney, 1946) fronted a number of first class bands during the 60s and 70s, including The Id and Copperwine. His performances were memorable not only for his strong, soulful vocals but for the wheelstands and spins he would execute with his wheelchair (Jeff being paralysed from birth by spina bifida)
1965-1971 Lead Vocalist Member of the bands The Id, Yama, and Copperwine with The Id and Copperwine achieving national success, both live and with Top Ten hit singles. ("Big Time Operator" - The Id), ("Teach Me How To Fly" - Copperwine). In May 1970, Wendy Saddington joined musician Jeff St. John's highly acclaimed and well-established group, 'Copperwine', as co-vocalist just after the release of the group's Joint Effort album. Copperwine's line-up consisted of the following musicians: Wendy Saddington (lead vocals), Jeff St John (lead vocals), Harry Brus (bass), Ross East (guitar, vocals), Peter Figures (drums), and Barry Kelly (keyboards, vocals). With St. John temporarily away from the band, Wendy fronted Copperwine for their acclaimed performance at the Wallacia Festival on the central-coast of New South Wales. A live recording of the event, Wendy Saddington and The Copperwine Live was released on Festival's new progressive subsidiary Infinity during '71, which showcased Copperwine's sympathetic backing sensibilities for Wendy's distinctive vocals. Wendy left Copperwine around February 1971.
By mid-1973, beset by personal upheavals, disillusionment and continuing health problems, Jeff decided to throw in the towel and head off to the UK. His farewell concert was a gala event staged at the Sydney Opera House, with the St John Band augmented by friends including Vince Melouney, John A. Bird and Ace Follington.
. 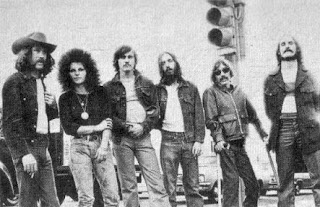 .
In May 1974, Infinity issued an album of the concert, Jeff St John Live (included here), while Jeff was playing a handful of low-key gigs in London. He returned to Australia in August that year, to plan his next move. On his return, Jeff formed a new backing band, Red Cloud, and his new single "Mr Jones" / "Acapulco Lady" was released in May 1975. Produced by Martin Erdman and arranged by ex-Blackfeatherguitar-wiz John Robinson, the single was a minor sales success. It was followed up in October by another 45, utilising the same production/arranging team, "Blood Brother" (b/w "Reach Out And Touch Me"). Jeff and Red Cloud maintained a heavy touring schedule during 1975-76, and the singer continued as a popular live draw.
Jeff was the first Oz artist to sign with US imprint Asylum (whose listing included The Eagles, Jackson Browne and Linda Ronstadt) and he released a clutch of impressive singles for the label, capped by his welcome return to the national Top 10 during early 1977 with his scorching version of the Frankie Miller-Andy Fraser track "Fool In Love", a recording which must surely rate as one of the greatest soul records made anywhere, anytime, and must surely rank as one of Jeff's very finest vocal performances. A fresh (and typically thorough) Glenn A. Baker retrospective compilation, Survivor 1965-1975 was released in late 1977.
. 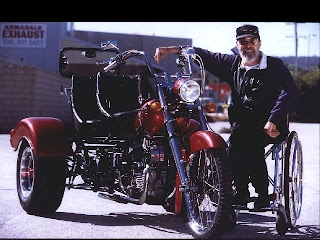 .
Jeff continued to record and perform live through the late 70s and into the early 80s, producing some quality rock performances, but in 1983, at the age of 37, he announced his retirement.
From 1983 until now has done a lot of things including collaboration with Universities on various programs for the disabled, lecture tours on the same, and designing plus building a beautifull Harley Davidson trike (the Dinosaur)plus of course fronting Jeffrey St John and The Embers.
Jeff was recently made PATRON for the MOSAIC FAMILY & COMMUNITY SERVICES Organisation. This recently formed organisation provides support for disabled people in many areas, including rehabilitation programs for disabled people unfairly penalised by the legal system. (Extracts from Milesago and Jeff's Website)
This rip was taken from Vinyl at 320kps and includes album artwork (thanks to Micko at Midoztouch). I've also included label scans of my album for your interest. Enjoy!
.
Track Listing 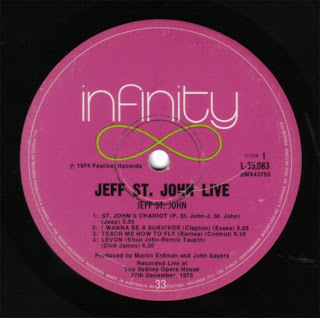