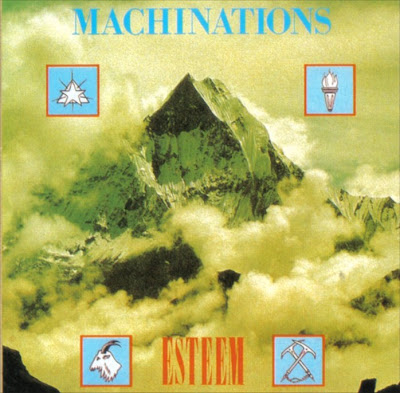 Machinations was a popular Sydney-based outfit working the mid-1980s independent Australian music scene. They toured Australia many times, appearing on every imaginable entertainment program and sold over 200,000 records in Australia.
Notable national hits included "Pressure Sway", "My Heart's On Fire" and "No Say In It". They also achieved indie prominence with the two versions of their first single, "Average Inadequacy". Machinations failed to achieve as much commercial success, either at home or abroad, as many of their peers. Nevertheless, the band had a cult following in dance clubs, by far their strongest supporters.
The band formed around Tim Doyle and Tony Starr, who started writing together around the end of 1979, using what electronic instruments they could find. Their school friend Fred Loneragan joined as singer and they played their first show at Garibaldi's in Darlinghurst, Sydney in early 1980. Another school friend, Nero (Nick) Swan, soon joined on bass.
In late 1980, with the assistance of radio Triple J, the band 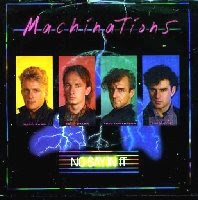 recorded some songs at Trafalgar Studios; in November 1980, the band entered the studio with producer Lobby Loyde. These recordings resulted in the band's debut single, "Average Inadequacy"/"Arabia" (released 26 August 1981), and the four-track debut self-titled EP (20 November 1981), both released on the independent Phantom Records label.
"Average Inadequacy" created enough interest for Mushroom's White Label to sign the band and reissue the single with a new B-side, "Machinations of Dance" in March 1982. A year later, Machinations issued a new single, "Jack"/"Be Double" in February 1983. The track "Jack" was about US writer Jack Kerouac, and due to lyrical reference to illegal drugs ('I wanna take some 1960s LSD'), "Jack" was often not played in live sets when audiences included minors.
This was followed by "Pressure Sway"/"Pushbike" in June 1983. "Pressure Sway" became the band's first national mainstream charting single when it peaked at #21 during July 1983. "Pressure Sway" also made an impact in the United States reaching #40 on Billboard's Club Play Singles chart. In April 1983, Machinations released their debut album, 'Esteeem', which peaked at #54 on the Australian album charts. The third single from the album was, "Jumping the Gap"/"Terminal Wharf", released in October 1983. 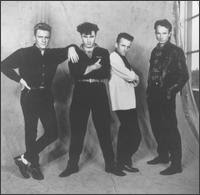 Following the album's release, and an Australian tour support slot with Joe Jackson, Machinations added Warren McLean on drums; prior to that the band used a drum machine (a Roland CR-78). The band entered Rhinoceros Studios with English producer Julian Mendelshon, emerging with the smoothest and most fully realised album of its career, Big Music, in July 1985. The album produced four hit singles. The first of these, "No Say in It"/"Man Overboard" pre-empted the album by nine months (it was released in September 1984) and ended up being the band’s highest charting single, peaking at #14 in October 1984. The second single, "My Heart's on Fire"/"Spark" followed in May 1985, it reached #27 in June 1985.The third single, "You Got Me Going Again"/"I Ain't Waiting for No Train" was released in August, 1985, making #39, however the fourth single, "Execution of Love"/"Dusted Down", released in December 1985 failed to chart. Naomi Star sang backing vocals on most of the album, although Inez Anthony was featured on "No Say in It". The album peaked at #20 on the national album charts, spending several weeks at that position. It was also released in the United States on the A&M label.
In 1985 Machinations performed the three national hit songs for the Oz for Africa concert (part of the global Live Aid program). It was broadcast in Australia (on both Seven Network and Nine Network) and on MTV in the US.
.

.
In 1986, White Label issued the mini-album 'The Big Beat', a collection of dance remixes of singles like "No Say in It", "Execution of Love", "Pressure Sway" and "You Got Me Going Again", which reached #83 on the charts. That year, Warren McLean left Machinations to join Melbourne funk-pop outfit I'm Talking. Henry Downes took his place on drums. Downes was then replaced by John MacKay (ex-Sea Monsters) in early 1987. The band was back in the studios soon after with American producer Andy Wallace (Prince, Run DMC), recording a new album.
Machinations' third album, 'Uptown' was release 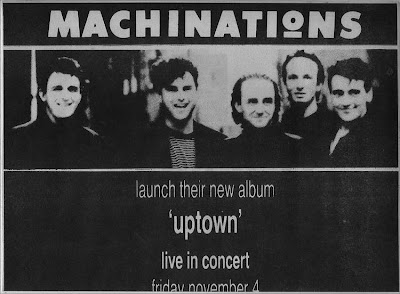 d in October 1988 and produced four singles spread out over eighteen months. The first single, "Do to You"/"Looking Out for You", was released in August 1987 and almost matched the highpoint of "No Say In It", reaching #15 in October 1987. The second single, "Intimacy"/"Hit by a Missile" (May 1988), reached #44[5], the third, "Do It to Me"/"Normal" (October 1988), peaked at #69 and the fourth, "Cars and Planes"/"Beats and Planes" (February 1989) failed to chart. The album was well received upon its release and reached #46 on the national album charts.
By that stage, Machinations had established themselves as a popular band on the Australian touring circuit. The band's activities were curtailed in early 1989 when a hit-and-run accident left Loneragan unconscious and with a broken back. He spent several months recuperating in hospital. Initially other band members intended to continue writing new material whilst Loneragan recovered from his injuries, but over time the various members left to pursue other projects. Swan toured with the James Freud's band and with MacKay performed with Absent Friends.
In early 1997, Machinations with Loneragan reconvened for some live appearances, which they hoped would lead to new recordings; however these plans never came to fruition.
In September 2006 US label, Almacantar Records reissued the band's original 1981 EP, with one additional track, "Average Inadequacy" [extract from wikipedia]
. 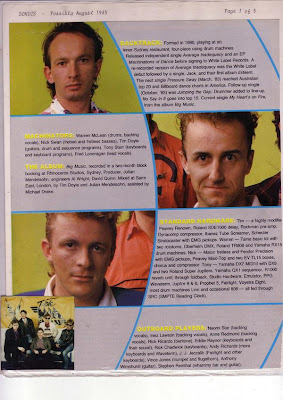 This is a transcript of the Band's first official biography released by SCAM Management in 1981.
Scam Management comprised it's legendary founder Lobby Loyde, an accountant, receptionist and the various tour managers of the other bands it managed, Sunnyboys, TableWaiters and Local Product. MACHINATIONS Tim Doyle and Tony Starr first started writing together at the end of 79. Using varied 'electronic gadgetry', ie drum machines, synths, their initial musical ideas were realised. Upon the return of old school friend Fred Loneragan from overseas, lyrics were soon written, and they had a singer. This original nucleus of the band played their first gigs in the inner city of Sydney in early 1980. The band were not so concerned with commercial aspirations but with the desire to perform for an audience. Their first show was at Garibaldis, a punk venue disguised as a restaurant in Darlinghurst. This was followed by residencies at the Heritage Hotel in King's Cross and at the Rock Gardens down the road in William St They had played only a few shows in all before they were joined onstage by another enlisted schoolmate, Nero Swan on bass guitar, although their drummer remained a Roland CR-78 for the next couple of years * With the support of the t

hen 2JJ radio station *, the band recorded some of their songs at Annandale's Trafalger Studios with Lobby Loyde at the helm in November 1980. These sessions produced the single "Average Inadequacy" and their debut selftitled EP. They were recorded essentially live in the studio with little production and released on the Phantom label, headed by Jules Normington ( soon to become a trusted friend). Again with the support of 2JJJ both releases received plenty of airplay and dramatically increased the bands following, the band were joined briefly around 1982 by drummer Henri Downes ( appears in the Jumping the Gap filmclip). Warren Maclean ( drums on Big Music ) joined in 1983 and remained till 1986 when he was headhunted by Kate Ceberanos outfit, I'm Talking. He went on to join Divinyls for their last few years together as a band.
Maclean was followed by kiwi John Mackay, late of Castles in Spain, Nick Conroys band. Mackay was the final addition to the Mach's line-up and remained till the end in 1989. The Mach's residency at the Rock Gardens proved fortuitous for the band. The venue was located across the road from JJJ's then studios on William St ( just down from the Coke sign). Any band that played more than once there was likely to be noticed ( particularly if they were any good ) It was an unofficial proving ground for many of Sydneys unsigned bands. Pel Mel, Laughing Clowns, JMM, Scapaflow, Surfside Six, the Thought Criminals all received JJJ attention. Average Inadequacy was a huge JJJ favourite. The song remained in their Hottest 100 well into the early 90's.
. 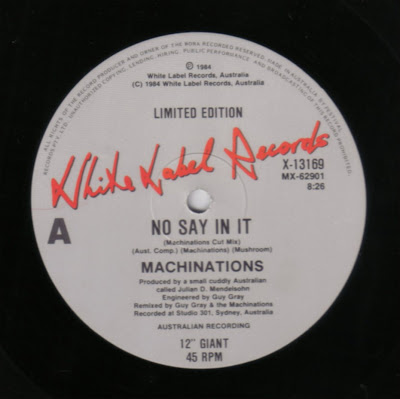 This post consists of a rip (320kps) taken from a CD release of this album along with full album artwork. As a bonus, I have also chosen to include some rare dance mixes and extended plays of some of their most popular singles, all ripped from mint condition Vinyl 12" singles.
Although I wasn't really big on Dance music in the 80's - Machinations had a certain sound which made their music more appealing than some of the other Dance music at the time.
Not that I'm trying to 'Pressure Sway' you into listening to the album, but I reckon it is worth a listen if you haven't heard it yet.
. 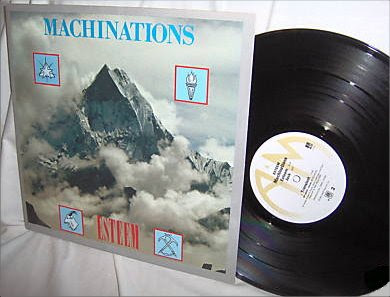