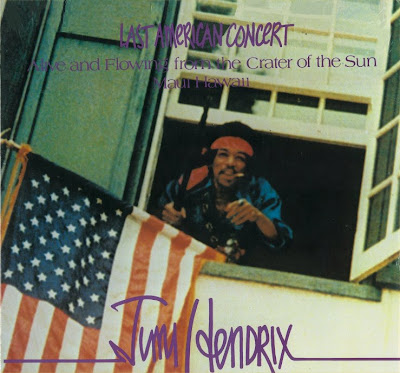 (Thursday July 30th 1970. Rainbow Bridge Vibratory Color Sound Experiment, Haleakala Crate, Island Of Maui, Hawaii. Jimi Hendrix was supported by Air)
.
Jimi Hendrix (Cry Of Love) take the stage in the afternoon for the first of their performances. Jimi: "Glad to see you again, I hope everything's alright. Dig, give us about a minute, give us about a minute to set up and, er, yeah we'll forget about tomorrow and yesterday, get into... our own little world for a while, catch up to the wind." Someone offers Jimi something. He replies: "Er, I've had mine actually. Yeah I'd like to get into a thing called "Spanish Castle Magic" and, er, check out everything and see what's happening."
Afterwards: "Yeah, okay... we'd like to do another thing, go into another thing, if... the bass is working. Testing, testing, testing, testing, one, two, three." The crew has to come on stage to adjust the equipment. When they have finished, Jimi continues with "Here Comes Your Lover Man" and "The Land Of The New Rising Sun" and a completely new song, "In From The Storm". Then: "Yeah, thank you very much, thank you. I'd 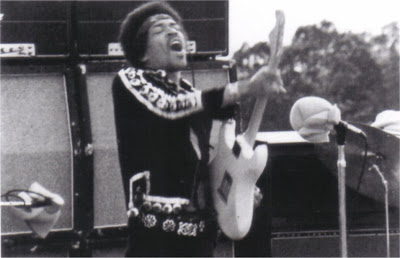 like to tune up one more time, okay? I'd like to do this tune that everybody here knows about, it's a thing called "Message To Love" - everybody knows about that. We'd like to just bathe in it for a second, for always actually." Jimi continues with "Message To Love".
Afterwards he announces: "I'd like to go into one of those other things, do a thing... dedicated to that little girl over there called Hartley, a thing called "Foxy Lady" — look out! Plug your ears, plug your ears, it's gonna be loud!" When the song is over, Jimi says: "Thank you very much, I'd like to do a 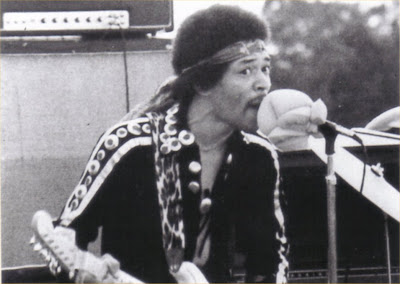 slow blues right now.
It's a thing about a cat, you know, he gotta leave town because his old lady don't want him around, because, you know, nobody [wants] him in town and all the downs. You know, the cat's all low and everything, but then he's gonna get it together, 'cause he's going down the train station with his little baby and his little pack on his back. Come back and buy the town and maybe the girl does it to him one more time, might even marry her and give a piece to her. It's called "Get My Heart Back Together'" — I don't know whether it's about myself, I don't know." After this blues track, the 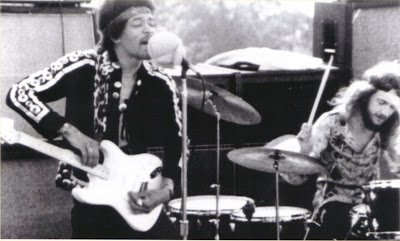 set continues with "Voodoo Child (Slight Return)" and "Fire".
"Yeah we'd like to do another one, I think, er, a few of us might remember this one, some of us will never forget it, including me..." Jimi ends the first show with "Purple Haze", then tells the audience: "Thank you, thank you, peace with you man,thank you. We'd like to come back later on and we're bound to get it on again if we can, okay, [unless] anything stops us."
Cry Of Love return for their second performance. Jimi opens the show with another new song, "Dolly Dagger". He slows the song down at the ends and proceeds to play a very melodic version of "Villanova 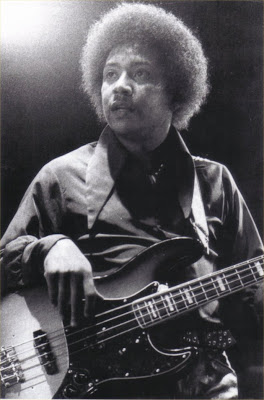 Junction", before continuing the set with "Ezy Ryder". He announces: "I'd like to do a little blues to the sun called "Red House". After this number, Cry of Love continue with "Freedom", "Beginnings" and "Straight Ahead" ending this last song with the introduction to "Land Of The New Rising Sun". After thanking the crowd, Jimi continues with "Land Of The New Rising Sun" and then plays "Keep On Grooving". Mitch plays an extended drum solo and Jimi returns to play "Stone Free". He ends the concert with a few bars of "Hey Joe" before revisiting the solo of' "Stone Free". Jimi says "Thank you very much, good night."
.
Note from Chuck Wein: "Even though the album and video are called 'Rainbow Bridge', it was known as Rainbow Ridge because that's the name of the ridge on which the concert was held." [Transcript from Tony Brown's "Jimi Hendrix Concert Files" 1999, Omnibus Press]
.
Ok - this is my last post for the 2010, and in fact the decade. To celebrate this I have decided to post my most treasured album. I purchased this bootleg in 1978 from Reading Records in Carlton, Melbourne for the pricely sum of $30 (a small fortune for a poor Uni student at the time).
It still has the shrink wrap on it and I reckon I've only played 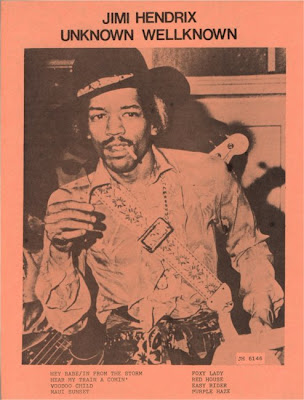 it half a dozen times in the past 32 years. I instead, transfered it to cassette tape and wore out several copies! It really is an awesome stereo recording (a soundboard for sure) and at the time was the best Hendrix 'bootleg' around. I have yet to see this exact bootleg available on any other website, so I am confident that this is the first time it has been posted. There are other bootlegs around with the same name (Last American Concert Vol 1 & 2) but are on different labels and have different track listings and covers. This bootleg was also released under a completely different name and cover design - 'Unknown Wellknown' (see cover above) but was only a mono pressing.
Also note that this Maui concert was not in fact Hendrix's last American Concert as he played at the Honolulu International Centre, Hawaii the following night on August 1st - which was the last time he played on American soil.
The rip has been made from a 'near mint' condition vinyl copy at 320kps and I have included full album artwork and a selection of photos taken at the concert by Tony Brown himself.
. 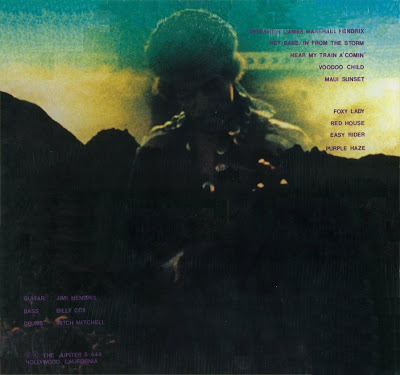