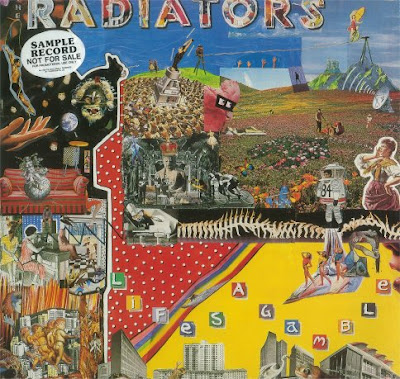 Few survive the Rock ‘n Roll road to stardom but The Radiators (the Rads) are Rock’s greatest survivors! They are approaching 30 years of outstanding music, exciting and sometimes controversial lyrics, more than 4,000 electrifying live performances and platinum and gold album sales.
The Rads debuted late 1978. Their first album “Feel the Heat” was released late 1979 and by March 1980 these Aussie Rock Icons had achieved platinum status.
Little did they then know they would go on to forge a unique sound and influence thousands of music lovers throughout Australia.
Since 1978 The Rads have achieved many “firsts”
* First Australian Band to have advance/pre-sales on a debut album (6,000 copies of “Feel the Heat” had been sold before it was released); 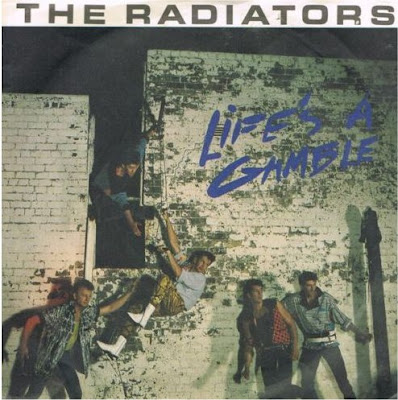 * First Australian Band to achieve platinum status and a Top Ten position with their first two albums;
* First Australian Band to play more than 320 gigs in their first year of formation;
* One of very few Rock Bands worldwide to have survived so long with their original frontline intact [extract from The Radiators Website]
.
Radiators Biography
Formed in Western Sydney in 1978, The Radiators were originally lumped in with the New Wave scene in Sydney but in reality were a pub rock band with a sense of humour. In their hey-day they were one of the hardest working bands in Australia, touring constantly and racking up over 2,500 gigs by the early 1990s. 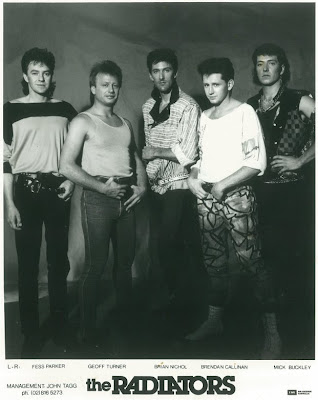 Their first single (on WEA) was "Comin’ Home" which reached number 33 (and probably earned them their New Wave tag). "Fess’ Song" (“I take drugs, I like sex, I like looking at dirty pictures, I like lying in bed with Fess”) and the album 'Feel The Heat' followed and The Rads’ then went on to support The Police on their Australian Tour in 1980.
'Hit And Run' was the third single lifted from their debut LP which went on to sell 90,000 copies. In 1981 they changed record labels and released Roomful Of Diamonds. 1982 brought the singles Up For Grabs and Nothing’s Changed. A new contract with EMI produced the album Scream Of The Real and the singles No Tragedy and You.
Another LP followed in 1984 'Life’s A Gamble' along with 3 singles; The Beatles’ "Revolution", "Life’s A Gamble" and "A Bit Of Pain Never Hurts". Long-serving drummer Chris Tagg left in June 1984 to be replaced by a string of others. The band with more record labels than hot dinners continued recording well into the 90s but by then their brand of boogie-influenced rock had been superseded by more alternative guitar bands. But, being the pub-rock warhorses that they were, The Radiators would not stop.
The Radiators (still one of the hardest working bands in the land) still play live in Australia today (I saw them in January 2003 actually, and despite the absence of as keyboard player these days, these guys still R.O.C.K). Of special note is the bands most (in)famous song (and solid live favourite), a charming little ditty entitled Give Me Head which is about, well . . . you work it out! [extract from Nostalgia Central]
. 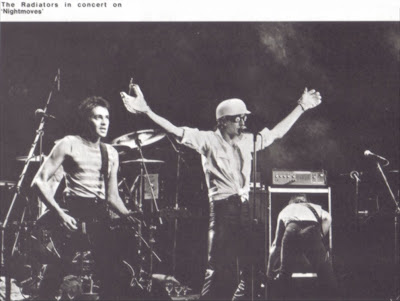 .
'Life's A Gamble' is a strange album - the first side of the album is a little disappointing with only the title track holding its own, however the flip side a completely different story. The B-Side tracks are much stronger with some great riffs and lyrics. In particular, "Scream Of The Real" which oddly enough was the title of their previous album, has some strange moments where you almost think that 'master reel' is running slow, however, it soon becomes apparent that the sound effects serve a purpose. The final track "Rock and Roll Carnivore" is the best track by far and closes the album on a real high.
However, don't expect any of their usual larakin songs amongst this lot - The Rads have finally grown up from their 'Gimme Head' days. 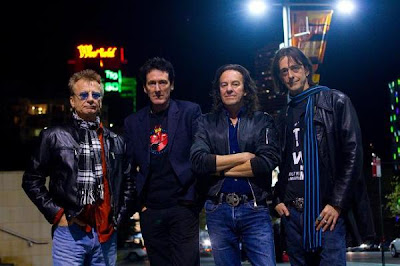 The post consists of a rip (320kps) taken from my 'virgin' vinyl (a Promo Copy) along with full album artwork, including an inner record jacket which is one of the best album artworks that I have come across - similar to Elton John's Yellow Brick Road.
I have also included two bonus singles: "Room Full Of Diamonds" from 1981 and their brilliant cover of the Beatles hit "Revolution" released in 1984, along with a copy of a Publicity Photo (see B&W above) that was included with this promo copy.
.
Track Listing
01 - Life's A Gamble
02 - I'd Die For You
03 - Suddenly We're Strangers
04 - Getting Away From It All
05 - A Bit Of Pain Never Hurts
06 - Let's Do It Again
07 - Hollywood (The Love You Steal)
08 - Night Slave
09 - Scratch It Off 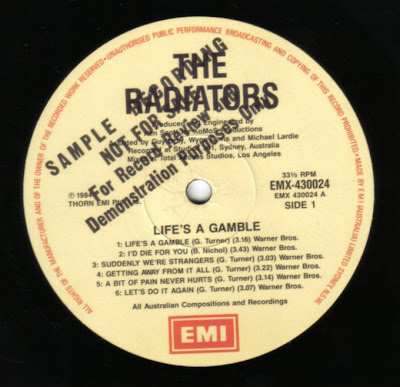