.
Before things get too serious here at Rock On Vinyl, I thought it might be fun to post a song at the end of each month, that could be categorized as being either Weird, Obscure, Crazy or just plain Korny. 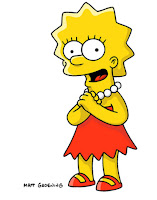 My first WOCK on Vinyl posting is also dedicated to Michael Jackson, who tragically passed away this week at the tender age of 50. May he now find true peace in his final resting place.
Michael Jackson made a cameo appearance in an episode of the Simpsons called "Stark Raveing Dad" and wrote/sings a birthday song for Lisa called "Happy Birthday Lisa"

Lisa wakes Bart up and reminds him that her birthday is coming up and that he neglects or forgets her birthday every year. Bart promises to get her the best present ever. Meanwhile, Bart washes his red hat with the white laundry, and Homer has no choice but to wear a pink shirt to work. As a result, Mr. Burns suspects Homer of being a "free thinking anarchist" and has him detained. Dr. Marvin Monroe administers a 20-question quiz that Homer has Bart fill out. The results cause Homer to be sent to a mental institution, resembling the institution from One Flew Over the Cuckoo's Nest, where he shares a cell with 'the big white guy who thinks he's the little black guy'. In his cell Homer meets a big white man who claims to be Michael Jackson and speaking with the artist's distinctive voice. Homer, who astonishingly enough has never even heard of the artist, believes him instantly.

Marge comes to visit Homer and convinces his doctors that Bart is the primary cause of Homer's problems. Homer gets an official certificate that says he is not insane and Michael reveals that he is only in the hospital voluntarily. Homer calls and tells Bart that he is bringing Michael Jackson to stay for a few days. Against Homer's wishes, Bart lets the word out and all of Springfield turns out to see Michael Jackson. All the town's excitement is deflated when the fake Michael is revealed by Homer.

Lisa is upset when she realizes that Bart has yet again failed to acknowledge her birthday, due to finding out that Michael was coming. After hearing Lisa writing an angry letter to Bart, Michael convinces Bart to let him help. Together they write and perform a song specifically for Lisa's birthday called "Happy Birthday Lisa". Lisa is thrilled and hugs her brother, saying that he has given her the best present ever. Suddenly, Michael reveals that he is Leon Kompowsky, a brick-layer from Paterson, New Jersey. He explains that he does his Michael voice due to the fact he felt angry for the majority of his life and that he earned people's respect when he did the vocal impersonation. With his confidence renewed after composing a good song, he soon bids farewell to the Simpsons, singing Lisa's birthday song to himself as he strolls off down the road.
For your pleasure, I am including both the YouTube video clip and the 320kps MP3.