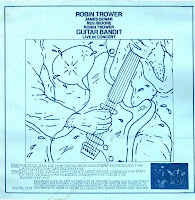 When I bought 'Guitar Bandit' (aka Live At The Record Plant) it was the late 70's and some of the record stands at the Victoria Market (Melbourne) would have a couple of bins of these type of boots by various artists. A lot of Zeppelin, Springsteen, Hendrix and Deep Purple, and every once in a while a gem like this one. These boots came in a plain white cardboard sleeve with an insert slid in between the plastic wrap and sleeve. Remembers? I played the crap out of this for years, but my copy still has its shrink wrap attached in one piece. Recorded Live at Record Plant Studios, Sausalito, California, this is an excellent sounding FM broadcast of Trower after the release of 'Twice Removed From Yesterday' but before 'Bridge Of Sighs' on the Amazing Kornyphone Records label. Like most of the boots produced in the 70's it lacks bass but the recording itself is crystal clear.
Trower first formed a group in 1962 that came to be known as The Paramounts, later including fellow Southend High School pupil Gary Brooker. The Paramounts disbanded in 1966 to pursue individual projects. Trower then joined Brooker's new band Procol Harum in 1967, with whom he remained until 1972. After going solo in 1973 (replaced in Procol Harum by Dave Ball), he found the individual identity and style that have brought him acclaim to this day.
Before launching his own eponymous band, he joined singer Frankie Miller, bass player James Dewar, and former Jethro Tul 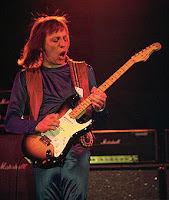 l drummer Clive Bunker to form the short-lived combo Jude. Although this outfit played some well-received gigs, it did not record and soon split up.
Trower retained Dewar as a bassist, who took on lead vocals as well, and recruited drummer Reg Isidore (later replaced by Bill Lordan) to form the Robin Trower Band in 1973.
Perhaps Trower's most famous album and my personal favourite is
'Bridge of Sighs' (1974). This album, along with his first and third solo albums, was produced by his former Procol Harum bandmate, organist Matthew Fisher. Despite differences, Trower's early power trio work was noted for its Hendrix influences.
One other thing that attracted me to Trower's earlier albums are their distinctive album covers, the creative work of Funky Paul Olsen. I was lucky enough to see Trower play at Festival Hall, in Melbourne in 1975, when he toured Australia with his 'For Earth Below' show. The one thing that struck me the most at the time was how easy he made his guitar work look, yet was able to reproduce his album solos flawlessly.
In 1977, feeling he had already proven himself as a performer, Trower ventured into new musical realms, as demonstrated by the release of the 'In City Dreams' album. The 1978 release of 'Caravan to Midnight' was in a different style from the rest of his earlier work, symbolising a change in direction for him. 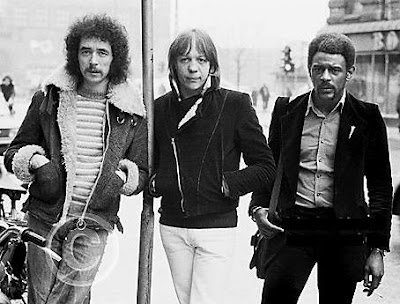 In the early 1980s, Trower teamed up with former Cream bassist Jack Bruce and his previous drummers Lordan and Isidore, for two albums, 'BLT' (Bruce, Lordan, Trower) and 'Truce' (Trower, Bruce, Isidore). To be honest, this is not my favourite era in the Trower evolution and feel that he seemed to loose direction with his music
Trower's album, 'Living Out of Time' (2003), featured the return of veteran band mates Dave Bronze on bass, vocalist Davey Pattison (formerly with Ronnie Montrose's band Gamma) and Pete Thompson on drums - the same lineup as the mid 1980s albums Passion and Take What You Need.
In 2007, Robin released a third recording with Jack Bruce, 'Seven Moons', featuring Gary Husband on drums. Trower toured the United States and Canada in the summer and autumn of 2006. A 2008 world tour began in Ft. Pierce, Florida on 16 January 2008. Joining Davey Pattison and Pete Thompson was Glenn Letsch (formerly of Gamma) playing bass (Extract from Wikipedia). Trower's latest release (2009) is called 'What Lies Beneath' and stands to be another classic. Well worth a listen!
The Guitar Bandit rip included here was taken from Vinyl at 320kbs.
.
Track Listing:
01 - The Fool And Me
02 - Twice Removed From Yesterday
03 - Lady Love
04 - Daydream
05 - Day Of The Eagle
06 - I Can't Wait Much Longer
07 - Man Of The World
08 - Sinner's Song
09 - A Little Bit Of Sympathy
.
Band Members:
Robin Trower: guitar/ vocals
James Dewar: bass/ vocals
Reg Isodore: drums/ vocals
.
Robin Trower Link (94Mb) REPOST
.
Posted by AussieRock at 12:54 AM