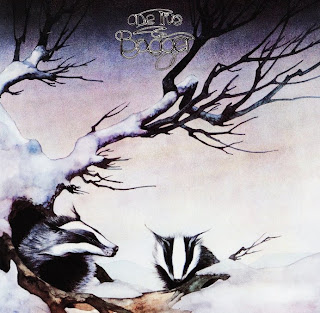 Recorded 'live' at London's Rainbow Theatre in 1973, "One Live Badger" introduces one of the most interesting bands to emerge in the early 70's. Composed of former Yes keyboard man Tony Kaye, guitarist Brian Parrish (ex-Parrish & Gurvitz), former Ashton, Gardner & Dyke drummer Roy Dyke, and bassist David Foster. Badger promise much on the evidence of this first album which is full of fiery, dynamic playing, crisp vocal work (both lead and harmony) and excellent songs, mostly written by the whole group.The decision to make Badger's first album a 'live' one came about after a series of intensive rehearsals. Scheduled to appear in concert with Yes at the Rainbow, the band's early enthusiasm and vigour could only suitably be captured through a 'live' recording. Produced by 'Yes' Jon Anderson, Badger and Geoffrey Haslam, it's a triumph, combining the raucous, stomping atmosphere induced by Badger's music with precision and technical expertise, qualities possessed in no small measure by the group.

Most of the songs have a religious theme but stay 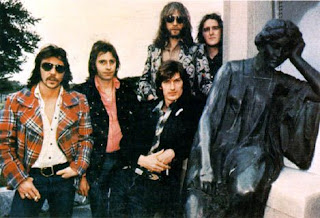 well shy of being preachy. This is not complex progressive, but it is a very nice album with lots of energy, power, and emotion. It has recently been reissued on CD and sports the great cover work by Roger Dean. Formed in mid-'72, Badger was the idea of Tony Kaye and David Foster. Tony and David had been acquainted while the former had been a Yes member, David Foster helping to write (with Jon Anderson) two tracks for the bands second album, "Time And A Word". At the same time Tony and David had also got together to make an album of David's other songs. Never released, they began work on re-mixing it following Tony's decision to leave Yes.It was at this point in time that the decision came to form a group. Within a short time they had recruited Roy Dyke (who first made his name with Brian Epstein's protege Remo Four) who had just split with Ashton, Gardner & Dyke. The search for a guitarist halted soon, too, when Roy recommended Brian Parrish, whose work with Parrish & Gurvitz had attracted much critical acclaim, but little public reaction.
Their second album "White Lady", has Jackie Lomax taking center stage and was a shift from their progressive sound to a more soulful sound - a big disappointment in my opinion compared to their debut Live album, which I highly recommend. To read more, see the official badger website Badger 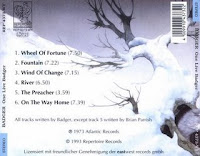 This rip was taken from a CD pressing at 320kbs and includes full Album Artwork
.