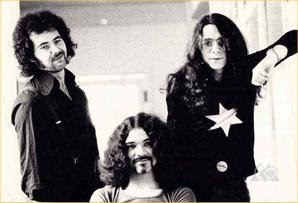 Late 1967 in Cardiff, Burke Shelley (bass/lead vocals) met up with Ray Phillips (drums) and guitarist Tony Bourge to form Budgie establishing a substantial following within the South Wales college and club circuit. After a journalist commented Budgie's sound was more akin to a 'Six Ton' Budgie, their name became as heavyweight as their delivery. In 1970, Roger Bain was impressed by their raw energy and promise and through his publishing company 'Hummingbird Productions', Dave Howels from MCA signed the band. Budgie were now back as Budgie with a five album deal. (Budgie On Stage In Cardiff - 1971) Many claim The MCA albums were arguably their finest work, with openers Budgie and Squawk providing the backbone of heavy riffs and melodic interludes which was to characterise the bands' style. Shelley's high-pitched vocals were first aired on the charmingly titled single 'Crash Course In Brain Surgery'. Their sense of humour was often reflected in their song titles, 'Hot As A Docker's Armpit' proving Budgie didn't take life too seriously. 1973's Never Turn Your Back On A Friend with its Roger Dean designed gatefold sleeve boasted some classic moments, from the thoughtful 11 minute epic 'Parents' to the blistering 'Breadfan', to be covered some 20 years later by Metallica. For me, this album is a classic in Budgie's catalogue, and I was so taken with it that I actually purchased 2 copies (one to play and the other to keep for prosperity !)
.
Ray Phillips departed in late '73. Pete Boot was brought in quickly to honour a Spanish touring schedule and record 'In For The Kill', Budgie's first LP to chart. Once Steve Williams on Drums stepped in, Budgie were once again in full flight. In 1975 they provided their fans with the astounding Bandolier, considered by many to be the .........(Shelley, Bourge and Boot On Stage - 1974) pinnacle of their achievement. With additional Welsh guitarist ....... Myf Issacs touring with the band, their stage sound was also fuller.
.
Retrospectively a bad decision, their management elected to take a deal offered by A&M rather than re-sign with MCA. The more melodic 'If I Were Britannia I'd Waive The Rules' followed, but it didn't chart. In 1977 Budgie re-located to Canada to crack the North American market and 'Impeckable' became their most mainstream effort. In 1978 after the 'Hide Your Pussy' tour and Tony Bourge quit. Back in Britain Budgie enlisted Rob Kendrick (ex-Trapeze) and flew out to Texas, a trip paid for by Don Smith who would later produce their final album. In 1979 John Thomas replaced Rob on Guitar. An ex-George Hatcher player, "JT" injected the band with a new lease of life. Signing to RCA, their momentum was accelerated by the birth of NWOBHM which lead many younger rock fans to discover their back catalogue. In the next 3 years, Budgie released an EP, 3 albums (Power Supply / Nightflight / Deliver Us From Evil), headlined the
.

Reading Festival and took Poland by storm. Incredibly, 1983 saw the band without a record deal and without a live album to encapsulate their stage delivery. They soldiered on until our last gig in 1988 with Jim Simpson (ex-UFO), Williams having departed in late '86. Interest in Budgie continued as Iron Maiden, Soundgarden and Metallica covered songs and all their LPs became available on CD. In 1995, Shelley re-formed Budgie with Thomas and Robert 'Congo' Jones (ex-Love Sculpture) to headline the San Antonio music festival in front of 25,000 screaming Texans. Again, thanks to promoter Bill Lee, they returned to Texas in 1996 for another one-off show to celebrate 25 years since their first album. A lavish double CD anthology, An Ecstacy Of Fumbling came out in 1996. Via New Millennium Communications, a double live CD We Came, We Saw featuring the entire Reading Festival Performances from 1980 and 1982 was released. To be fair, this material should have come out as a live album at the time of their popularity in the early 80's. 1997 and 1998 was a period of inactivity touring wise, and many fans thought Burke had called it a day once more. However, Heavier Than Air was released, a double CD of rare live recordings spanning their career from 1972 to 1978. It gave fans the first official release of live guitar work by the hugely popular Tony Bourge. 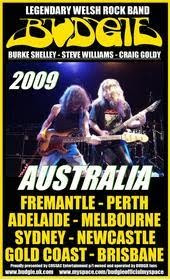 .
Thanks to promotion from Ray Cordell and Alan Howard and management from Paul Cox, Letchworth 1999 and featured their first UK live performance in 11 years and the return of Steve Williams on drums. This was a warm-up show for the annual rock festival held in Sweden, with Budgie headlining on 12th June 1999. The 80's classic reformed line-up then played San Antonio for the 3rd time in April 2000. Tragedy then struck with John Thomas suffering a cerebral aneurysm in June 2000. For a period, no one knew whether he would ever play guitar again. For those fans who were aware of John's illness, his return to the stage at the Legends of Welsh Rock was an emotional one. Budgie headlined this gig in Wales in September 2001. JT, whilst not back to 100% top form, played a great show considering the treatment and recuperation he'd gone through. At the start of 2002, Burke Shelley was in the mood to get back on the road once more and to engage the band into some serious touring. Andy Hart, a Birmingham based guitarist well known to JT was enlisted to replace JT. In 2002, Burke, Steve and Andy played over 30 dates, two of these being in the States. The show at San Antonio on 2nd August was recorded and released as a live CD entitled Life In San Antonio in November 2002. Due to commitments outside of Budgie, Andy Hart left the band in Feb 2003 to be replaced by Simon Lees who toured the US, Sweden, Holland, Poland and the UK with Budgie and also played on, and co wrote, much of the bands first studio album in over twenty years entitled 'You're All Living In Cuckoo Land.' Simon suddenly left in July 2007 and was replaced by guitarist Craig Goldy (axeman for Ronnie James Dio). If all goes well, I will be sitting in the front row during one of their Australian 09' concerts in November.
. 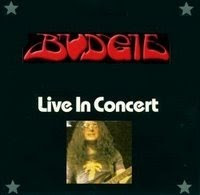 Bootleg recordings of Budgie are rare - in particular those with the Budgie MkII lineup (featuring Pete Boot on drums) This audience recording is excellent for the era in which it was made and the concert captures Budgie while it was still developing songs for it's next album, 'In For The Kill'. In particular, Hammer and Tongs is still very much in it's infancy - just a very basic 12 bar riff. 'Breadfan' and 'Parents' are the standout tracks for me, but hey - aren't they everyones favorites! Judas Priest make a guest appearance at the end of the concert, as they were touring with Budgie at the time. This rip was taken from cassette at 320kbs and includes some artwork. Recorded at the Marquee, London 11-2-197. The three bonus tracks are in mp3 format also, but only 160kps.
.
Track Listing
01. Introductions
02. Breadfan
03. Hammer and Tongs
04. You're The Biggest Thing Since Powdered Milk
05. Parents
06. Zoom Club
07. Running From My Soul
08. Rocking Man
09. The Stumble (Instrumental)
10. Running From My Soul (reprise, jam with Judas Priest)
[Bonus Tracks]
11. Rape of the locks (Rare Live 1973)
12. Rocking Man (Rare Live 1973)
13. Young is a world (Rare Live 1973)
.
Band Members
Burke Shelley (Bass, Vocals)
Tony Bourge (Guitar, Vocals)
Pete Boot (Drums)
.
Budgie Link (172Mb) REPOST