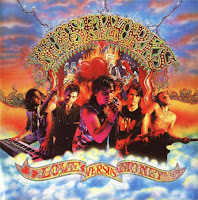 Noiseworks gave Aussie pub rock a sophisticated and contemporary edge in the late 80`s and early 90`s with a trifecta of earthy, rootsy but well polished albums starting with 'Noiseworks' (1987), then Touch in 1988 and finishing in 1991 with the more back to basics 'Love Versus Money' album, featured here.

Charismatic New Zealand born singer Jon Stevens was a second generation Marc Hunter (lead singer of the kiwi band Dragon), but a good one at that, much like comparing Steve Tyler from Aerosmith to Mick Jagger. Their debut  album was the most anthemic and straightforward, rough and ready pub rock one of the three, which produced the excellent hit "No Lies", the closest Noiseworks ever come to replicating hard rock or heavy rock guitar. Although it was always destined to become a live favourite for the average Noiseworks fan, it strangely was outsold greatly on the singles chart by the more downbeat and formulaic "Take Me Back". The only song off 'Touch' that achieved any singles chart success was the atmospheric and poignant title song, although the acoustic "Simple Man" is a great song and should have done a lot better on the charts.
'Love Versus Money' lacked a bit of firepower, but the single "R.I.P (Millie)", a song Stevens wrote in memory of his mother who died of cancer, and the bluesy boogie R&B classic "Hot Chilli Woman", which made it to number 7 on the Australian rock chart, were two of the best songs Noiseworks ever recorded. The band disbanded in 1992, re-formed periodically over the years until when in 2008 they officially got back together again to tour with The Choirboys and some other acts around Australia.
. 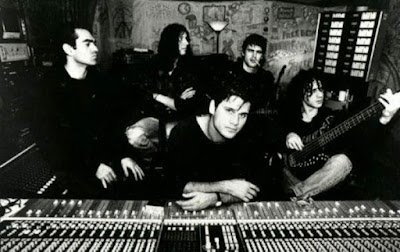 Interview With Noiseworks
Noiseworks are hardly a household name over here in the UK. It's in sharp contrast to their status in Australia, where the guys have had eleven Top 40 hits and two multi-platinum Top 10 albums in the past five years. Love Versus Money looks set to be their third multi and perhaps a chance for them to make serious in-roads in the major record markets elsewhere in the World.

I won't pretend that their third vinyl Frisbee is one of my red-hot records of the year, but if you like sinewy, energetic Rock with a touch of distinctive Aussie panache, then Love Versus Money could well float your boat. One thing's for sure, they've certainly proved themselves in one of the most testing environments – the Aussie beer halls.
.

"You've gotta be good in the pubs otherwise they'll fu*kin' throw shit at ya," laughs rugged, no-nonsense singer Jon Stevens. But, hey, we're only skimming the surface here. So, let's put on the diving gear and go…uhm…down under. Strangely enough, I don't find myself on a coral reef or a sun-kissed golden beach with a fit lookin' Sheila but in a spare room in the labyrinth of the Sony building. Sitting opposite me, apart from the previously mentioned singer, is softly spoken guitarist, Stuart Fraser. For starters, did the two of them have any thoughts on the down-to-earth, good Aussie bloke syndrome?

"I dunno why that is," ponders Jon. "Maybe it's just because of our perspective. I guess it's a pretty realistic perspective rather than a glossy type. Y'know: 'now let's make a hit record, let's try and make some money.' In Australia and New Zealand [Jon's a New Zealander] it's sorta like 'the tall poppy syndrome.' It is very much a thing over there, where you can’t be seen to be too big for your boots. I'm sure it's the same in Glasgow [he's obviously twigged I’m Scottish]. So you've always gotta maintain that you’re still a bloke."

So, now that we've established that they're not narcissistic punks or Spinal Tap look-alikes, let's move on with haste to Love Versus Money. The songs on display range from the intensely personal through to full-blooded raunch.

To try and get an insight into Noiseworks' way of thinking, let's look at the two 'extremes' of their range. "R.I.P. (Millie)" was a song written about Jon's late mother. Did writing the song help him come to terms with his mother’s death?

"Yes, definitely helpful," he says. "It was something that I didn't intentionally write. It just came out." Jon also admits that "it was just too hard for me to initially to do the song." Despite the inherent sadness of the song, John feels its effect is essentially positive. "It's a negative thing but a very positive look at it. And for me, it was a song that could possibly help other people."

His experience allowed him "to let go of her. Seeing somebody deteriorate with cancer like that affects you for the rest of your life. As a songwriter able to release those tensions, those frustrations… You can fu*kin' iron it out. Then it's gone. You've released it."

By way of contrast, "Don't Lead Me On", simply reeks of sexual tension. The story behind it is that Noiseworks were mixing their record in LA with Randy (how apt) Jackson, and a couple of Randy's lady friends came into the studio, as Jon fondly recalls.

"I went, 'Do you speak French or do French!?'" wisecracks Stuart. 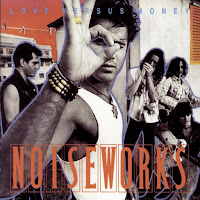 Not to be outdone, Jon quips: "I think they did French on each other! So, she said yeah," he continues. "Well, on ya go. Turn up the mic. I don't know what you're saying but just make sure it's fu*kin' dirty, sexy; because the set-up of the song is about walking into a bar, having a drink and seeing a lady…and being tempted. The bitch is doing the come-on and this shit, and you’re sorta like, 'hey, don't play games. I'm not here to play games."

To some people that might add credence to the theory that all men are potential rapists or that most Aussie men are sexist pigs. Hmm…bullshit! It's just an honest gut / groin reaction in that type of situation. Anyway, the end justifies the means. Work that one out.

Another song on Love Versus Money that's worthy of mention is their octane-fuelled version of 'Sly And The Family Stones' Take You Higher, which features Oz sex god, INXS's Michael Hutchence adding to the vocals. The collaboration occurred, as Stuart recalls, by chance in a Sydney recording studio.

"We were downstairs and they were upstairs, and being the regular blokes that they are, you just see them and…play table-tennis. That was how the song came about. We did it as a jam in between recordings."

Jon chips in: "As you were saying before, the attitude of feet on the ground, head out of the clouds. Y'know Michael…he's the least like that. I mean he might have this big star trip but he certainly doesn’t put that across when he’s with us."

Noiseworks have recently been quoted as saying that Love Versus Money is "still very much a rock n' roll record," and that “anyone who thought we'd do something other than a rock n' roll record doesn't know us very well." They also went on to say that the definition of rock n' roll had changed in recent years. What exactly do they mean?
. 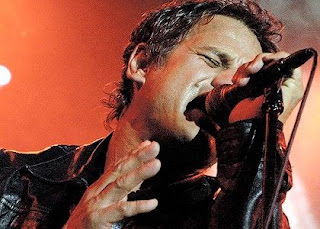 ."I associated the word rock' roll with Elvis, Little Richard, and Buddy Holly. That's rock n' roll," says Jon. "Rock n' roll in the '80s and '90s is just a word. There's so many different musical style that are available for people to listen to. You hear a dance record and some people call it a rock n' roll record. It's music. It's fu*kin’ music. If you like it, you like it. I think rock n' roll that's associated with Noiseworks is more from the live perspective 'cos that's definitely a rock n' roll thing. Y'know, it's live and sweaty and energetic. That's what rock n' roll is as well."   So now you know.

Noiseworks, for the foreseeable future, have won their creative freedom. They've worked at their own pace as well as producing themselves.

"We didn't have anyone saying stop, so basically we over-produced ourselves," says Jon, tongue firmly in cheek and with a glint in his eye. "It was great!"

Springtime should see them back in these Isles, "playing everywhere!" Catch them if you can. And remember when "Love" versus the "Money," love should win.    [Thanks to Mark Liddell  Riff Raff, January 1992]
.
Post consists of  FLACs and MP3 (320kps) ripped from CD and includes full album artwork. Enjoy 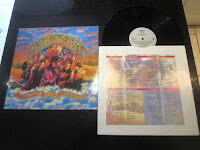