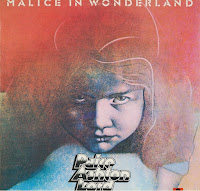 Paice Ashton Lord, henceforth to be known as affectionately as PAL, is the name of a new five piece band formed by a group of gentlemen who have enough musical credits to put the London Symphony Orchestra to shame.
The idea for the band came from Jon Lord and lan Paice who, after Deep Purple finally split forever in 1976, decided that they enjoyed working together. Not a bad discovery after playing for eight years in one of the world's biggest ever bands. To Paice's drumming and Jon Lord's keyboard work they decided to add the multi-talented singer and keyboardist Tony Ashton who, over the years, has wreaked his own brand of musical havoc among bands like Ashton, Gardner and Dyke and Family.
Then came ex-Stretch bass guitarist Paul Martinez, as cool, funky and subtle as you could want, and jovial Bernie Marsden on lead guitar. Martinez and Marsden were not added simply because they happened to be buddies of Paice Ashton and Lord. No. Our dynamic trio held a long and gruelling series of auditions before arriving at Martinez and Marsden. 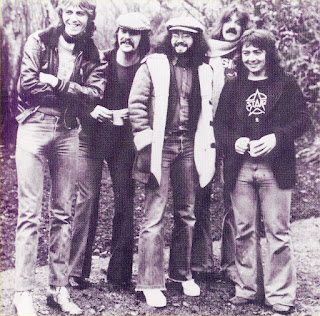 In fact Bernie nearly missed the boat, as he told me one night when we were watching Ritchie Blackmore's Rainbow at London's Hammersmith Odeon. He hadn't even seen the adverts asking for guitarists for the new band and it was Blackmore's drummer Cozy Powell who put him onto PAL. "Best move I've ever made" Marsden claimed from behind a huge and satisfied grin. And so the band was together and they whisked themselves off to Munich's Musicland recording studio, scene of some of Deep Purple's greatest vinyl triumphs, and the result is contained in this album.
Well, there's more of the same aggression, bite, integrity and sheer consummate musical ability. But above and beyond that there's a rhythm and style which is totally new. Would you believe funky brass sections super cool chick choruses and an r & b feel that most of us thought had been lost forever?
Just listen to Tony Ashton s rich and gravelly vocals, Jon Lord's cool and easy keyboard work, lan Paice's crisp and inventive drumming, Paul Martinez's relaxed and rolling bass and Bernie's stylish and composed guitar playing. [Brian Harrigan (Melody Maker) - Linear Notes]
. 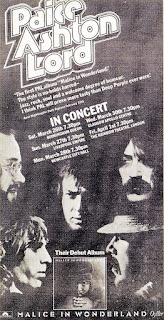 How PAL was formed
Paice, Ashton, Lord emerged in August 1976 amidst much fanfare in the music press, though it had been no secret that drummer lan Paice and organist Jon Lord were forming a band together after the messy demise of Deep Purple in March.

In those days rock still had enough of a counter culture attraction about it to support a number of weekly music papers. The story both of Purple's split and the new band was big news, with speculation both as to who would be in the band and what they might sound like. For those with more than a passing knowledge of Jon Lord's career the announcement of Tony Ashton as the third member of the project hardly came as a big surprise and, while funding for the new band would come out of the somewhat deeper pockets of Lord and Paice, the musical direction can perhaps be traced more dearly through Ashton's musical lineage.

Tony Ashton had been brought up not far from Liverpool and got into rhythm & blues at an early age, he joined The Remo Four, who made enough of a name for themselves to back George Harrision on a solo album and support The Beatles on a U.S. tour. By 1967 Ashton and drummer Roy Dyke decided to form a new band; Ashton, Gardener & Dyke was the result. They were recommended to Tony Edwards who was managing Deep Purple. Edwards thought they sounded promising and took them on. His decision was proved right when the band scored a success with the hit single "Resurrection Shuffle". It was through Edwards that Ashton and Lord came to meet, the pair finding a rapport which saw them working together on a number of projects. Lord helped with arrangements on a couple of Ashton, Gardener & Dyke's albums, after which he and Ashton co-wrote the soundtrack for a movie called "The Last Rebel". 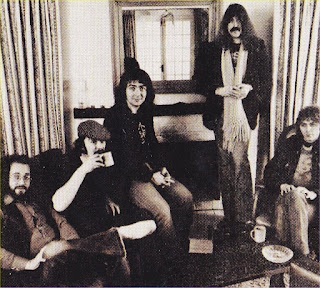 1971 found Ashton and Lord writing and recording material for the "First Of The Big Bands" album which, due to pressure of work, wasn't finished until 1974. The album leaned towards the heavy rock and blues pattern developed by Ashton, Gardener & Dyke. Released under the Ashton/Lord banner ("we decided against Lord Ashton!" recalls Tony), it was a precursor to what would follow. Tony again: "We had tried to get a Phil Spector sound with as many musicians as we could, with two drummers and five guitar players It was an expensive experiment". Tony and Jon's musical path's crossed again in 1975 when they were both involved in the live performance of Roger Glover's "Butterfly Ball" at the Albert Hall.

The demise of Deep Purple in 1976 was not entirely unexpected. Their last studio album had been fine but on the road things had rapidly gone down hill. With the split came a chance for the members to branch out. For Jon Lord there was very little hesitation and having discussed it with Ian Paice he decided to start a new band, with Ian Ashton top of his musicians wants list,
"Ian and Jon approached me with the idea of forming a band. In fact Jon had approached me before and I hadn't liked the idea much because I couldn't see myself as a front man. I also thought that with Jon and me both being keyboard players, we'd get in each others way. I'd dropped out of playing with bonds. There were plenty of sessions to do. I was also into doing commercials and jingles for television which is interesting work. It's also quite lucrative as well. I was quite comfortable and I suppose I was in a bit of a rut". Tony was nevertheless persuaded to give it a go and the project began to take shape. " This is the second of the big bands!" quipped Jon Lord after Tony said yes.
. 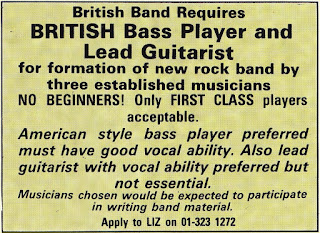 Nothing was announced but mysterious adverts (see left) in major music papers during July 1976 were enough to give a hint, especially if you recognised the phone number of Purple's office In London! "British Band Requires British Bass Player and Lead Guitarist for formation of new rock band by three established musicians". It must have had every musician in the country wondering.

A semi-pro guitarist called Ernie Tull was one of those who dialled the number and found himself with an audition:  "I've no idea how many people applied, but it was a hell of an experience to play with those type of musicians and with the power they generate ", he told me afterwards. All the players did the some number, just a blues thing in A minor. You each went into the room, plugged in and after five minutes warm up did the number. It felt really great"

Ernie's friend saw Lord giving the thumbs up sign and they took his number but Ernie feels he was maybe too much of a Blackmore-type of player to get picked.

Lord described the auditions afterwards: "If you want to know what hell on earth is like, try conducting auditions! It's not that the musicians were bad or anything, it's just that there were so many of them. We had about sixty bass players to listen to and this came down to a short list of four. One of them was a great bass player but very much in the Glenn/Roger tradition and this didn't really fit in with what we saw the band as being. Paul Martinez fitted right in within four bars, it sounded as if he and Ian had been playing together for years and as Ian is the main driving force behind the band a rapport between these two was important". Martinez was at the time playing in a band called Stretch, which Tony Ashton already knew of. "Paul had played on (Stretch's version of) Elmer Gantry's "Why Did You Do it" which was really funky so we liked him".
.

On the lead scene things were proving more difficult as Lord remembered, "Paul was almost the first bass player that came and Bernie was the fast guitarist, we could have saved all that trouble in the middle ". Bernie Marsden was with Babe Ruth (remembered by some - alright, me - for their vocalist, the charismatic jenny Haan) but he'd done numerous sessions and played with UFO and Cozy Powell's Hammer. Marsden hadn't seen the ads in the papers, it was Powell who told him about the vacancy.

Jon Lord; "We were already looking at two other guitarists, Chris West was one, he played a very jazzy style, but we wanted to keep the rock and roll element there. Another point in Bernie's favour was his ability to sing". A Sounds journalist collared Bemie down at the Nashville club shortly after the audition and asked about the band. "Who did you hear that from? I didn't know anybody knew, except for me and Purple management. I only told the rest of Babe Ruth about it yesterday. I've been blowing with them twice now and it's going very well. From what I've gathered it's going to be a bit more down to earth (than Purple), with some saxes and girl singers as well. Good old English rock and roll but with a bit of taste. I'll be the first to let you know if I actually get the gig". They phoned him the next day and he was in. "It was probably only because they were so knackered. My contribution just battered them into submission!"

On August 7th the papers announced that Lord and Paice were forming a new band and the line-up was made official on August 21st, After that there was a period of rehearsal; Paice and Lord (still tax exiles) had flown Ashton out to LA as soon as they'd decided to form the group, so the three could work undisturbed for a time, "We sat around a fender piano with ideas we all had and flung them together. This produced a lot of basic things which were later polished up in the studio". By the last week of September they were over in the Musicland studio's in Munich laying down the album (with Jon Lord's solo project "Sarabande" issued that same month).
.
This post consists of FLACs and MP3's (320kps) ripped from my imported vinyl (English Pressing) which I picked up many moons ago in Flinders Street (during my Uni days).  I was a huge fan of Deep Purple at the time, and bought anything that was related, even if I hadn't heard it beforehand. I wasn't disappointed with this album and felt that it had a similar sound to Deep Purples 'Come Taste The Band'.  Needless to say, this album has become one of my treasured possessions, and in near mint condition it has withstood the test of time.  Full album artwork and select photos are included, making this a ripper post. Enjoy
. 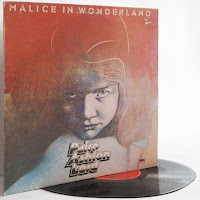 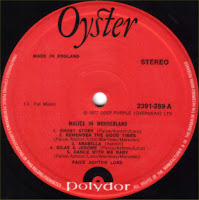