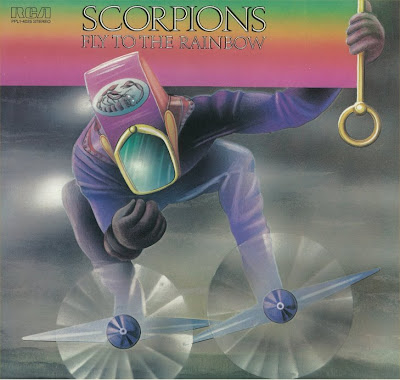 The Scorpions go way back to 1965 when Rudolf Schenker started up the band in Hanover, Germany, influenced by Elvis Presley, The Beatles and the many British beat groups like The Yardbirds, Pretty Things and Spooky Tooth that followed in their wake; they served their apprenticeship delivering standard beat sounds.
By 1970, the group's line up had settled down with the addition, from the band Copernicus, of vocalist Klaus Meine and Rudolf's younger brother Michael, who had already established his reputation, as a child prodigy on the guitar, with Cry (1968-1970). The five piece were completed by Wolfgang Dziony (Drums) and Lothar Heimberg (Bass) together they made a debut album 'Lonesome Crow', which was issued only in Germany in 1972.
British hard rock/heavy metal band UFO. At the end of the tour, Scorpions lead guitarist Michael Schenker was asked to fill an open position as UFO's guitarist and accepted the role. Schenker's departure temporarily resulted in the br 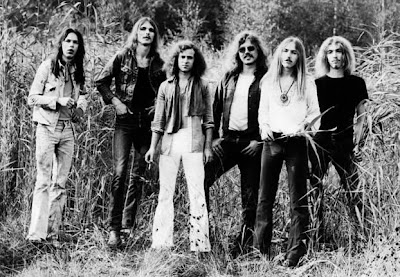 eak up of the band but Rudolf Schenker and later Klaus Meine ultimately merged with the band Dawn Road which consisted of guitarist Ulrich Roth filling Michael's role, as well as drummer Jürgen Rosenthal, and bass guIn support of their Lonesome Crow album, Scorpions appeared as the opening act for the guitarist Francis Buchholz. The new line up resumed under the Scorpions name and recorded their second studio album 'Fly to the Rainbow' which was released in 1974. It had a harder edge, with fewer excursions into the Krautrock experimentalism and wistful psychedelia of it’s predecessor. Uli’s soaring guitar antics were overtly following in the footsteps of Hendrix, yet his mastery of the lead guitar proved to be an exciting addition to the formula, and is highlighted in 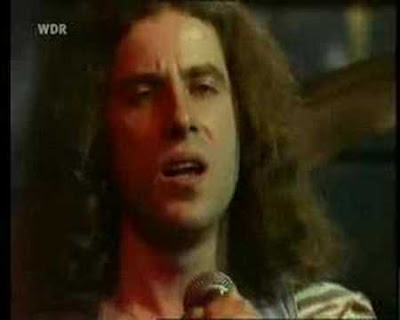 my favourite Scorpion's track "Speedy's Coming". Some tracks still retained a dreamy quality to them, notably on "This Is My Song" and the title track. In some ways, this is a more fully realised album than 'Lonesome Crow' with tighter, more disciplined song structures delivering more oomph to the mix.
.
When asked to comment on the cover art to the album, the band's former lead guitarist Uli Jon Roth said -
"Don’t ask me what that cover means… I disliked it from the beginning. It looked ludicrous to me back then and looks just as bad today. It was done by a firm of designers in Hamburg, who had actually done a good job on the Lonesome Crow album before, but I think that time they failed miserably. As for the meaning, I can only guess, but I’d rather not…" 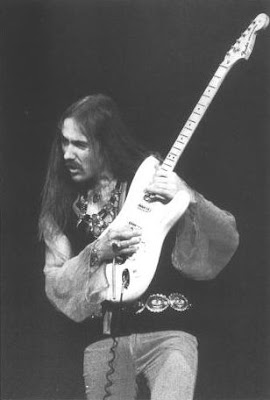 Ok, so the cover art is pretty absurd and probably a turn-off for those that might take a chance with it, but those willing to get passed it will be pleased to discover yet another excellent 70’s heavy metal album from Germany’s finest.
Fly to the Rainbow features the first lineup change between albums and it’s a pretty notable one. Firstly, guitarist Michael Schenker leaves to join UFO, but his replacement Ulrich Jon Roth would turn out to be one of the most significant members of the band during this early period. His esoteric style would produce a lot of classic material in the future, though it’s a shame that he didn’t contribute as much on this album. The other significant lineup change was the replacement of the masterful Lonesome Crow rhythm section with new bassist Francis Buchholz (who would become a staple) and drummer Jurgen Rosenthal. Both new members are good, but I can’t help but miss the Geezer Butler-esque melodies of Lothar Heimberg and the almost jazzy drumming of Wolfgang Dziony. How the band managed to replace them with equally talented members so quickly I’ll never know.
.
The album also has a fairly different sound than its predecessor, likely due to the new lineup. There’s far less of a psychedelic influence on this album and a much stronger bluesy rock ‘n’ roll vibe. The Black Sabbath comparisons are few and, ironically, comparisons to Ritchie Blackmore’s Rainbow are much more applicable. Opener “Speedy’s Coming” is notable as the first track where singer Klaus Meine sounds like his usual

self. Indeed, this is probably the first album where hints of the band’s future songwriting style would begin to emerge. Now it certainly sounds nothing like Savage Amusement, for instance, but listen to the chorus of a track like “Fly People Fly” or “Far Away” and not hear the trace beginnings of one of the 80’s most resilient heavy metal acts. And it’s a good thing that Fly to the Rainbow doesn’t sound like their 80’s material, otherwise extended blues numbers like the Roth-penned “Drifting Sun” and the Spanish sounding “They Need A Million” would certainly not exist.
I prefer the uniqueness of Lonesome Crow, but Fly to the Rainbow is just as solid, if not even more focused in terms of writing. The many acoustic passages used combined with the increased vocal presence of Klaus Meine create beautiful melodies, while the addition of Roth guarantees a heavy guitar sound and a signature Hendrix-inspired atmosphere. For fans of 70’s heavy metal/hard rock. [review by E Rock 2008]
.
Rip was taken from my Imported Vinyl pressing at 320kps and includes full LP and CD scans along with select photos of the band in the 70's.
. 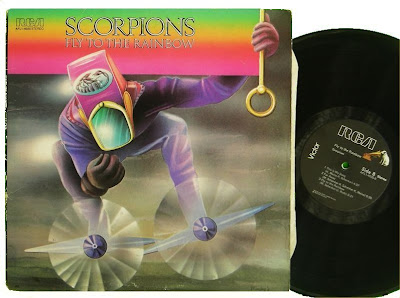