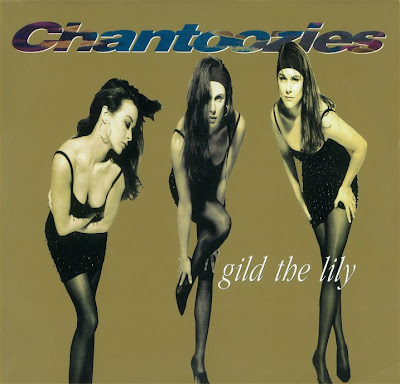 Chantoozies were an Australian pop group active from 1986 to 1991. The band featured four female singers: Eve von Bibra, Angie La Bozzetta, Ally Fowler and Tottie Goldsmith; and four male musicians: Brett Goldsmith (bass guitars, keyboards, programming), Scott Griffiths (keyboards, programming), Frank McKoy (lead vocals, guitars) and David Reyne (drums, backing vocals)
The Chantoozies were one of Australia’s hottest bands. A group of actors and entertainers signed to Mushroom Records. They began touring Australia in the late 80’s, appearing on every imaginable entertainment programme in the country. They have sold over 300,000 records, going Platinum and Gold.
They recorded the hit singles ‘Witch Queen of New Orleans’, ‘He’s Gonna Step On You Again’, ‘Wanna Be Up’, ‘Kiss and Tell’ and ‘Love The One Your With’ all reaching Top Ten of the Australian music charts.
They have toured with some o 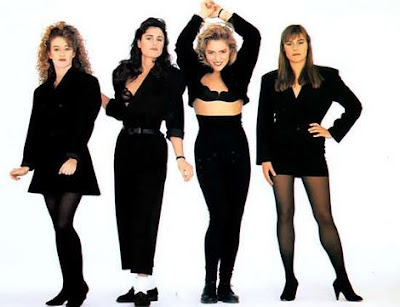 f Australia’s most recognised artists: Sherbet, James Reyne, Renee Geyer, Mondo Rock, Leo Sayer, Jo Jo Zep, John Paul Young, Choirboys, Noiseworks, The Bad Loves and many many others.
They toured with international acts such as Billy Joel.
They have also enjoyed successful individual careers outside of the Chantoozies as Singers, Actors and all round Entertainers. But it’s together as The Chantoozies they have the most fun
The Chantoozies perform their hits and a collection of covers from the 70’s, 80’s and 90’s. They are committed to performing a high standard of entertainment [Extract from ICM - Speakers & Entertainers].
.
Gild the Lily (1991) was recorded without Tottie Goldsmith, who left the band midway through 1990. The singles were covers of The Jackson 5's "I'll Be There" and Stephen Stills' "Love the One You're With" which reached #21 in 1991.
All four female lead vocalists briefly re-formed Chantoozies for the June to August 2006 Countdown Spectacular Tour; they performed "Wanna Be Up" only
. 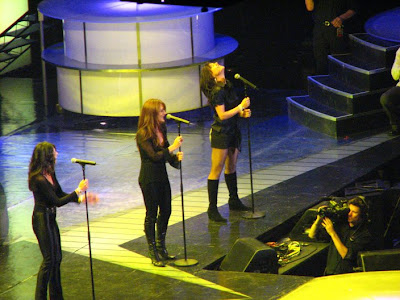 The Chantoozies are:
.
Eve von Bibra
The love interest from the hit movie Kenny, and soon to be released Kenny TV show for Channel 10. Singer/Songwriter/Actor
.
Ally Fowler
One of Australia’s most loved and watched Actor’s. Ally has performed in Television and Film. Most recently the telemovie ‘Scorched’ for Nine Network. Actor/Singer and quite frankly one of the funniest women in Australia.
.
Tottie Goldsmith
Celebrity Speaker and MC/Singer/Actor, how much talent can one woman have?
(Note: Tottie had left the group before Gild The Lily was recorded)
.
Angelica LaBozzetta
Was the first actress to play Natalie Nash in 'Home and Away', performed in the TV series 'Special Squad' and also appeared on 1990s episodes of 'Blue Heelers' and 'Big Sky'; and more recently in 2003 film 'The Rage in Placid Lake'.
.
David Reyne had been drummer for Clutch Cargo (included his brother James Reyne) which became Australian Crawl in late 1978. David Reyne had left before they recorded any material, and continued his acting education. He was also drummer for Cats Under Pressure with Simon Hussey (guitars, keyboards) and Mark Grieg (guitars) in 1984.
.
Brett Goldsmith had been in Wayback 5 during 1986 which included Kate Ceberano as a vocalist. Brett plays bass and keyboard.
. 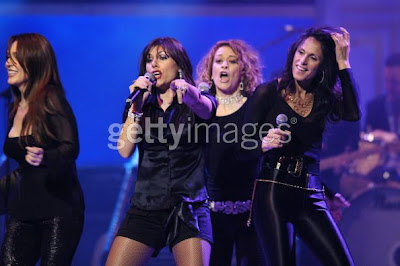 .
To be honest, when I first picked up this album from an OP Shop (in absolute mint condition - doubt if it had ever been played), I was somewhat skeptical about what the LP would sound like, being an all female group. However, from the opening cover track "Love The One Your With" (which incidentally is my favourite Stephen Stills tracks) I realised that these girls had more than just 'good looks'. Their vocal harmonies are a delight to listen to and bring to life the original compositions of Bibra, B.Goldsmith and Reyne, which make up a majority of the album.
My favourite track, other than the Stephen Stills cover, is "(Sweet) Baby Blue", with its catchy chorus and wonderful harmonies. Note that David's more famous brother, James Reyne appears on the last track "Take My Lovin" playing acoustic guitar and providing backing vocals.
The rip was taken from my vinyl copy at 320kps and includes full album artwork.
.
Track Listing
01 Love The One You're With
02 Walk On
03 Moonchild
04 Love Comes
05 Mystery
06 Come Back
07 Love Someone
08 Kiss Him Goodbye
09 Babe In The Woods
10 Who Cares
11 (Sweet) Baby Blue
12 Take My Lovin'
.
Chantoozies Link (111Mb) REPOST
.
Posted by AussieRock at 8:03 AM