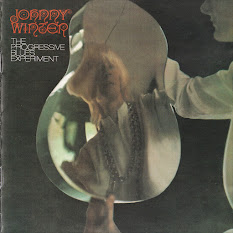 Originally released in 1968 on small Austin, TX label Sonobeat Records in a small pressing of 100, Winter sold the rights to Imperial Records for wider release.

Give the press a lead on an up-and-coming blues musician who isn't black, and you can be sure that someone, somewhere is going to use the phrase 'Great white hope'. And, to be fair, it's hard to resist it when your up-and-comer is Johnny Winter, whose whiter shade of pale is the first thing you notice about him. Until he starts playing, that is. Then, the only thing that strikes you that has anything to do with colour is how naturally this man turns blue. 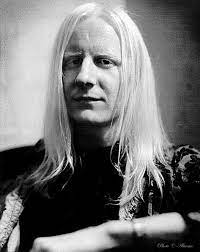 The blues was not exactly in the doldrums in the late '60s, but it was hardly a booming business. The time was ripe for new heroes, and during the winter of 1968-69 Rolling Stone devoted at least two articles to placing bets on one such. In a feature on Texas music, Larry Sepulvado and John Burks invited the magazine's readers to 'imagine a 130-pound cross-eyed albino bluesman with long fleecy hair playing some of the gutsiest blues guitar you have ever heard,' a trailer that hauled the 24-year-old Winter to prestigious New York gigs and lengthy contractual negotiations as several labels scuffled to sign him. CBS won and his debut album, simply called Johnny Winter, arrived in the spring of '69, sparking a long fuse of gigs that ended in explosive summer performances at Woodstock and Detroit's Motor City Rock Festival.
Over the next five years Winter's records and appearances would establish him as one of the biggest draws on the blues-rock circuit. After several gear-changes and some stops on the road, not to say crashes, he still commands a substantial fan base and his career is carefully charted at at least one extensive website. 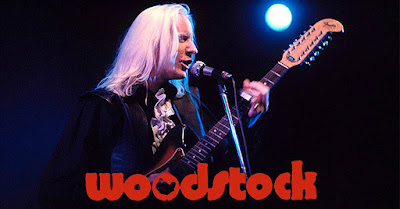 Just before the 'official' debut album hit the shops, another piece of Winter's work was exhibited by Imperial Records: an album he had made earlier for a small Texas label, Sonobeat, under the provocative title The Progressive Blues Experiment. Although the CBS release occupied most of the fierce spotlight that was being trained upon Winter, and prompted even hard line critics like Blues Unlimited's Mike Leadbitter to call him 'the best male, white blues guitarist there ever was', some reviewers - among them Rolling Stone's Pete Welding - preferred the rawer production of the Imperial set, and it has continued to find admirers ever since.'As murky as hell but fresh and powerful in approach', wrote Charles Shaar Murray recently. And here it is again. 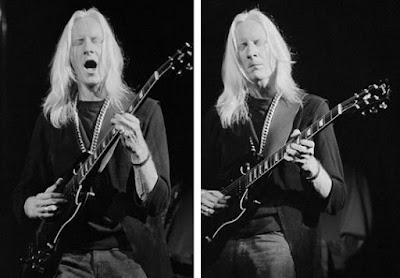 It's Johnny Winter's earliest album as such, but by no means his first recording: he'd been in that game since his mid-teens. Born in 1944, he grew up partly in his father's hometown of Leland, Mississippi, and partly in his mother's, the Texas Gulf Coast city of Beaumont. As a youngster he played clarinet, then ukulele, before taking up guitar. With his three-years-younger brother Edgar he had a preteen group modelled on the Everly Brothers, then in high school in Beaumont they formed Johnny & The Jammers, with Edgar playing keyboards, and recorded a rock 'n' roll single, 'School Day Blues', for the Dart label, which got them some attention. Johnny quit technical college to go into music full time, and for most of the next ten years he was in and out of studios in Houston and Beaumont, making singles for local labels under a variety of names, or playing guitar on sessions with other artists - blues, R&8, rockabilly, pop, whatever. 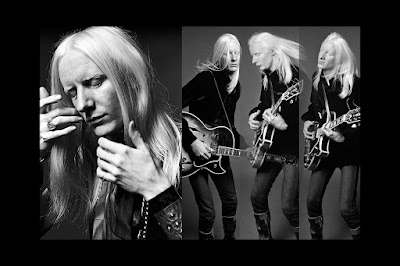 Meanwhile the club work went on and on, sometimes in white joints, sometimes black. Johnny had loved blues since he was a kid, had hung out with Beaumont's Clarence Garlow, of 'Bon Ton Roulet' fame, and had spent some time visiting the blues clubs in Chicago, and he took every Opportunity of playing both with local black artists and with visiting out-of-towners like Jimmy Reed' Johnny & The Jammers were transformed into other entities: around '65/'66, they were Johnny Winter & The Black Plague, wearing black, playing in black light.

By '67', Uncle John'Turner was in place as the group's drummer, and soon afterwards Tommy Shannon (later a charter member of Stevie Ray Vaughan's Double Trouble) joined on bass: this is the rhythm section heard on The Progressive Blues Experiment. The album was recorded at the Vulcan Gas Company, a club in Austin, Texas, in 1967 or '68. Though a version has circulated with crowd-noise on it, implying a live recording, the original tapes, as heard here, indicate that the only audience in the club was the guys doing the recording.

The influence of Muddy Waters (whom Winter would later produce, in a fine series of albums for Blue Sky) hangs over the proceedings like a dark blue cloud, from the opening 'Rollin'and Tumblin" through the tribute track - actually 'Still a Fool, Muddy's take on'Catfish Blues - to the acoustic 'Bad Luck and Trouble', which is pretty plainly modelled on Muddy's early sides with Little Walter. 0n this track Johnny plays the harmonica and mandolin as well as the National steel guitar. The National is also heard on'Broke Down Engine', where Johnny seems to apply the style of Robert Johnson to a theme by Blind Willie McTell. 'l Got Love If You Want it' came from Slim Harpo, 'Help Me'from Sonny Boy Williamson ll, 'lt's My Own Fault' from B.B. King and'Forty-Four' from Howlin' Wolf, 'Mean Town Blues' uses the riff from Slim Harpo's 'Shake Your Hips' - or Little Junior Parker's 'Feelin' Good, or John Lee Hooker's'Boogie Chillun', take your pick. Johnny sounds as if he has Hooker in mind: listen to his guitar solo, especially the passage from 1.52 onwards.

But the sources of Winter's material are much less the point than the skill with which he shifts his technical gears, from the throbbing slide lines of the Muddy tracks, through those Hookeresque chords, to the lissom single-string picking of 'It's My Own Fault'. In my own mind, I was the best white blues player around,'he would say later. A lot of white players have come down the blues highway in the last 30 years. Some of them, no doubt, have had chops to rival his.
But how many of them give you live blues action as incandescent as this? [Liner notes by Tony Bussell, July 1999] 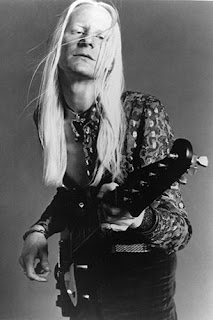 This post consists of FLACs taken from my newly acquired CD (another great flee market find) with full album artwork for both vinyl and CD.  Winter's earlier material is certainly his strongest and this release is testament to this by far.  Absolutely brilliant and Blues at its Best.
Tracklist 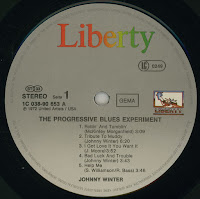