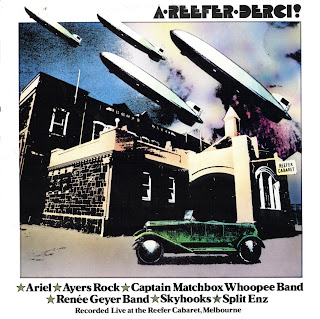 The Reefer Cabaret was the successor to the fabled TF Much / Much More Ballroom concert 'happenings' promoted by Bani McSpedden and John Pinder in 1971-72. The Much More events ended in December 1972, reportedly because of complaints from St Patrick's Cathedral (who owned Central Hall, where the shows were staged) about the type of music being performed and the use of drugs by audience and performers. During 1973 Pinder and McSpedden reportedly promoted similar events under the title "Stoned Again" (a name no doubt inspired by the famous Robert Crumb dope cartoon) but we've been unable to locate any details about these events as yet.
Like the Ballroom, the Reefer Cabaret was not the name of a venues per se (like Catcher or the Thumpin' Tum) but rather the title for a regular concert event held in one of the large community halls Melbourne that could be rented on a casual or regular basis for dances, meetings and similar functions -- in this case, the Dallas Brooks Hall in inner Melbourne, and built by the local chapter of the Order of Freemasons.
Like the Ballroom shows, the Reefer Cabaret events were usually held monthly and typically featured long concert-style performances, with multiple musical acts on the bill, interspersed with comedy, poetry readings, theatrical, dance or novelty performances. 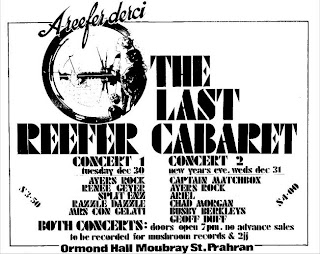 The first Reefer Cabaret show was held on 3 August 1974 at the Dallas Brooks Hall. It starred The Dingoes, soul group Skylight, the avant garde group Wind and rising stars Skyhooks, with its charismatic new lead singer Graham "Shirley" Strahan. The night cost $1200 to stage, and attracted 850 people. Unfortunately the Freemasons, who owned the Hall, were not impressed by the type of music (or its volume), nor by the copious quantities of illicit substances which were consumed by the audience. Roberts was obliged to move the Reefer Cabaret to the Ormond Hall in Prahran, owned by the Blind Institute of Melbourne, who apparently didn't have the same qualms about the moral dangers of loud music and dope-smoking. The shows were then presented on a monthly basis, with newer bands such as Madder Lake, Ayers Rock, Split Enz, The Renee Geyer Band and Ariel, who gained invaluable experience before a relatively discerning audience.
The Reefer Cabaret shows ran until sometime in 1976. As with the Garrison venue (which closed in 1974) the Reefer Cabaret gave considerable support to artists on the fledgling Mushroom label and (like the earlier Garrison: The Final Blow double album) Mushroom commemorated the Reefer Cabaret by recording the final concerts and compiling a selection of tracks on the valedictory 2LP set A-Reefer-Derci, (1976), which featured performances by Ariel, Ayers Rock, the Captain Matchbox Whoopee Band, the Renee Geyer Band, Skyhooks and Split Enz (Extract from Milesago).
.

Standout tracks are Ayers Rocks cover versions of the Rolling Stone's 'Gimme Shelter' and Weather Report's 'Boogie Woogie Waltz'. Their live work is nothing short of spectacular. Another personal favourite is Split Enz's rendition of 'Time For A Change' which showcases the superb vocals of Tim Finn and the haunting keyboards of Eddie Rayner.
This rip was taken from a Vinyl pressing in MP3 (320kbs) and FLAC formats (thanks to Sunshine) and includes full album artwork (thanks to Micko at Midoztouch)

Reposted in FLAC format for your pleasure
Track Listing
1. Intro/Welcome 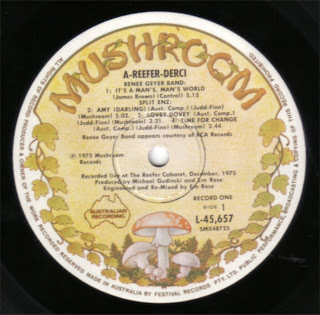