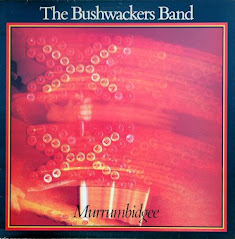 The Bushwackers were familiar to many Australians before turning to country music in the late 1970s. Founded in Melbourne in 1971 by Dave Isom, Jan Wositzky, Bert Kahanoff and Mick Slocum, they gained international recognition when their frenetic folk/rock sound became prominent in the world wide revival of traditional song and dance. The band was conceived at Latrobe University in Melbourne when the founding members, in order to qualify for a grant to travel to the Aquarius Arts Festival 1972 at the ANU in Canberra, had to register as a formal act, consequently taking their name from the title of an album by the English folk singer Martyn Wyndham-Read.

Later, Dobe Newton (vocalist from 1973) and Roger Corbett (1980) took up the mantle and the Bushwackers started evolving with a strong country music flavour while still retaining their passionate focus on being Australian. Notable recordings include Faces in the Street, Beneath the Southern Cross, Bushfire, Murrumbidgee and The Shearers Dream – two of which were released through Australian record label Astor Records. The album And the Band Played Waltzing Matilda was released through EMI records in 1976 and is regarded as one of their finest recordings.

After his stint in The Bushwackers, Dave Isom co-founded The Sundowners with Peter McDonald from The Mulga Bill's Bicycle Band in 1977. They played Australian folk music and recorded their first album "Colonial Classics" in the early 80s.

The Bushwackers won their first Golden Guitar in 1981, becoming a fixture in Tamworth where their famous “Chardonnay” show is still a finale of the Festival.

They toured widely and, with Dobe and Roger as the core, a veritable cavalcade of talented country performers flowed through their ranks … Tommy Emmanuel, Clare O’Meara, Mark Oats and Michael Vidale to name a few.

For decades, Dobe and Roger and their “mates” have brought together the folk stories and traditional music of Australia, writing about, performing, recording and celebrating our heritage with an exciting mix of emotion, humour and floor-thumping energy.

A household name, The Bushwackers hold a unique place in the hearts of so many proud Australians. [extract from the Tamworth Festival Website]
Album Review (by Paul The Stockman)
Their landmark ‘Murrumbidgee’ LP was recorded at London’s Morgan Studios with the legendary producer, John Wood, in 1977.
The opening track "Augathella Station" is more usually known as "Brisbane Ladies" or similar. It was penned by one Saul Mendelsohn, a stockman, in the 1880s but minor variations have been collected. It is firmly based on the British sea song "Spanish Ladies" about British sailors returning to England from Spain.

Unfortunately, somewhere along the line, someone with little or no idea decided the song could benefit from some tinkering. Now I'm not opposed to a bit of sensible tinkering - it is a folk song after all. I could live with the elimination of most of the place names although I can't see the point of it. The really absurd bit though is that this version has the drovers still in possession of the herd of cattle on the trip back to Augathella Station (Ranch) after having sold them in Brisbane?? No, they would not have driven any stock back home! Further, this version also has the drovers spending all their "money on the shanty town women" in some country town on the way home. This raises two points - firstly, it was very unlikely that any drovers that way inclined would have any money left after the "Brisbane Ladies" and the "girls of Toowong" (Toowong is an inner suburb of Brisbane) but more tellingly, Australia may have had "shantys" (inns), but not "shanty towns" in that sense and "shanty town women" appears to someone's crude attempt at evoking the concept of USA wild west saloon girls. Altogether, it is very disappointing that the Bushwackers had anything to do with such unauthentic garbage.
"Rain Tumbles Down" was one of the legendary Slim Dusty's earliest songs; the classic "When the Rain Tumbles down in July". He wrote it in 1945 and it was first released in 1947 on the old Regal Zonophone label as a 78rpm. The initial release was definitely of the Australian "hillbilly" style but Slim thankfully released continuously improved performances of the song over the years and they appeared on several of his 103 albums. The Bushwackers remain fairly true to the song and it retains a country and western feel.

Great versions of "The Lachlan Tigers" and "Flash Jack from Gundagai".

For those who may be wondering, the LP cover is of a "lagerphone" in frantic motion. A very popular instrument in any respectable "Bush Band". It's often thought to be purely an Australian invention but it's an import from England but given the now very common name "lagerphone" in Australia (because of all the crown beer bottletops used in its construction). [see http://australianfolk.blogspot.com] 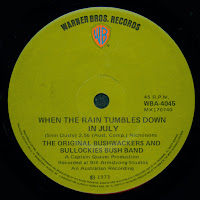 This post consists of FLACs ripped from my well played vinyl. I've applied some minor crackle and pop removals to freshen up the rip, but in my opinion the crackles give the music a more rustic and natural sound that enhances the listening experience.  Full album artwork and label scans are also included.  To clench the deal, I've also included as a bonus track, their original 1973 single release of "When The Rain Tumbles Down In July" (a shorter / different sounding version than that on this album) recorded on Warner Bros.
Tracklist 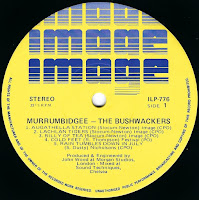 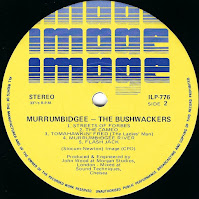