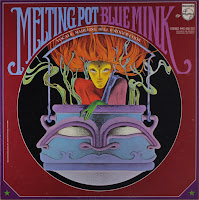 Blue Mink was a British five-piece pop group, that existed from 1969 to 1974. Over that period they had six Top 20 hit singles in the UK Singles Chart, and released five studio based albums. According to Allmusic: "they have been immortalised on a string of compilation albums, each recounting the string of effervescent hits that established them among Britain's best-loved pop groups of the early 1970s.

The band's debut single, "Melting Pot" (written by Cook and Greenaway) was recorded with this line-up and released on 31 October 1969, Philips (BF1818), with the b-side "Blue Mink" (penned by Alan Parker); it charted at #3 in the UK Singles Chart. An album of that title was released early in 1970, at the same time as the second single, "Good Morning Freedom". This track was not on the first release of the LP; but it was added to subsequent pressings. 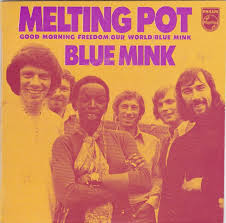 The members continued with their session work despite the success of the band. In March 1970, Cook and Bell appeared on Elton John's eponymous first solo album; Elton John covered "Good Morning Freedom" (written by Albert Hammond) anonymously on the Deacon Records budget compilation album Pick Of The Pops. In April, Cook and Greenaway played briefly in Currant Kraze, and together they continued to write songs like "You've Got Your Troubles", "I've Got You On My Mind" and "I'd Like To Teach the World To Sing". Other side projects included involvement with Alan Parker's band The Congregation; Herbie Flowers' contributions to Lou Reed's Transformer album; and the involvement of Flowers, Morgan and Parker in sessions with Pete Atkin in March 1971, that later appeared on his Driving Through Mythical America album. 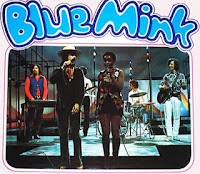 The band's second album and their third single released on Philips in September 1970 were entitled Our World (the album was released as Real Mink in the U.S.). The band's next single release was "The Banner Man" on Regal Zonophone in the spring of 1971. It reached #3 in the UK chart. The members' other projects now took priority until January 1972 when Blue Mink played two weeks at The Talk Of The Town club in London. Recordings from this engagement were released that March as the album Live at the Talk Of The Town simultaneously with the studio album A Time Of Change (renamed from Harvest to avoid confusion with Neil Young's new LP).

Ray Cooper (drums) and Anne Odell (keyboards) joined the band that summer and played on the single "Stay With Me" which charted at #11 in November 1972. By the time of Blue Mink's fourth album, Only When I Laugh, glam rock was supplanting the lighter pop sound of the previous few years. The associated single, "By The Devil (I Was Tempted)", written by Guy Fletcher and Doug Flett, only reached #26 and the Top 10 single "Randy" in June 1973 was their last success.

Their final album, Fruity, (January 1974) and the singles "Quackers" (January 1974) and "Get Up" (July 1974) failed, and the band split up that autumn after a farewell tour of the United States. Elton John was among the celebrities present to say goodbye, introducing the band onstage at The Troubadour in Los Angeles, California. 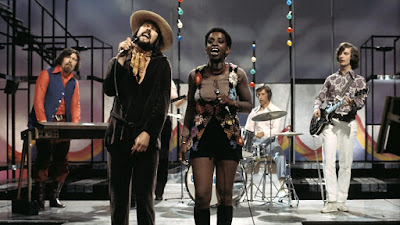 As a footnote, it is worth recording that when Capital Radio, one of the UK's first two independent local radio stations took to the air in London in 1973, the station identity jingles were written by Cook and Greenaway, performed by Blue Mink and orchestrated by George Martin. Appropriately, Madeline Bell had also sung the original jingles for Radio Caroline, the offshore pirate station that first went on-air in 1964, in the end successfully challenging the BBC's monopoly of British radio broadcasting.

Since the band's demise in 1977, each of the members maintained a loud presence in the world of session musicianship and songwriting. The Rimshots covered Blue Mink's "Get Up", re-titled as the disco single "7-6-5-4-3-2-1 (Blow Your Whistle)" in 1976, and had a hit single.
.
Was Blue Mink's 1970 song 'Melting Pot' racist?
(Phil Curtis, Life long love of music)
Not necessarily racist (I don't think in the song any particular race is privileged) , but to a modern listener, perhaps distinctly odd and rather disagreeable.

I remember in the early 1970s being played this song in school assemblies by earnest, politically correct and well-intentioned teachers. The “melting pot” hypothesis was regarded at the time as an enlightened solution to racial problems. The lyrics espouse how the world should become one big melting pot where different races and religions would be be mixed, "churning out coffee coloured people by the score", This refers to the supposed pigmentation of children after such racial mixing. 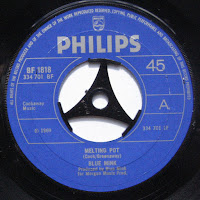 In the songs defence, it is in part a protest against those who though miscegenation a sin. Miscegenation (inter racial marriage and childbearing) was still a bit of a hot topic in the 1970s, analogous to debates over gay marriage today. This may be lost on a contemporary audience perhaps unfamiliar with the term and baffled by the idea that some people object to a person of - say - West Indian heritage marrying an Anglo-Saxon.

Its funny how things change. The thought of us all being the same fills me with the horrors. The benefits, or even the possibility, of a multicultural society had not been considered at this time. In 2017, we can rightly champion and celebrate diversity, and can recognise that being different need not stop us living happily together for our mutual benefit, so long as we apply a bit of mutual respect and toleration.
.
On a less serious note, you'll laugh your head off at the 'bogus news report' published in the New Biscuit Newspaper entitled "melting-pot-mass-killers-face-life-in-jail". Had me fooled for a brief moment ! Very clever and worth a look.. 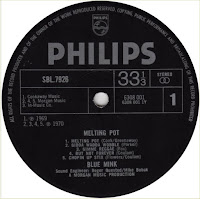 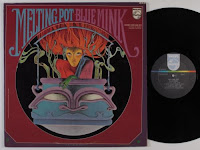