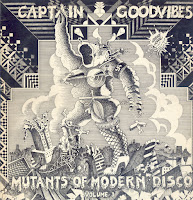 Is there any good reason that a comic book character captures the zeitgeist and takes off? For whatever reason, Captain Goodvibes (the Pig of Steel) – described by his creator Tony Edwards as the “erratic fascistic, feckless, thirsty, boneheaded, yobbo cartoon character” was a mainstay of surfing magazine Tracks from 1973 until 1981.

The Captain first appeared at the end of a pen one night in the autumn of 1973. Small but imperfectly formed, he was as surprised as anyone by his success and quite rightly saw his popularity as a licence to behave badly. He started binge drinking before he could breathe and abusing substances as diverse as plutonium and sausage mince before he could think, a gift he still struggles to master. 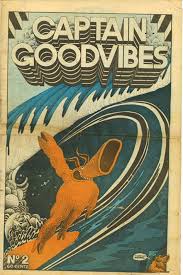 He took gratuitous filth, violence and bad dietary practices out of the gutter and onto a beach near you, souring young lives and stealing the promise of a bright future from their tiny hands. He blighted the pages of Tracks for about 8 years, polluted the air waves for a couple more and as if to demonstrate the breadth of his genius, embarked on a variety of ill advised projects that bought misery and financial ruin to all concerned.

Always one to rest on his laurels he has lovingly rebuilt this oasis of bad taste as a refuge for those oppressed by the designer desert around us. And so, welcome to the Captain's quagmire and please leave your maturity at the front door.  © Tony Edwards

This months WOCK on Vinyl post is an Australian pressing released on the Sticky label in 1978 (#SRL 001). For those of you who don’t know, Captain Goodvibes was the cartoon pig created by Tony Edwards, and made famous in the 1970’s by the Australian surfing magazine Tracks. The album features 3 spoken word/social commentaries and 1 musical track on each side, by the Captain himself. To say this album is strange is an understatement….. it makes Captain Beefheart sound like The Seekers! Regardless, this is a very rare and collectable album. 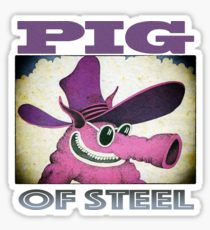 Captain Goodvibes was rude, vulgar, self-indulgent and a law breaker. He was capable of leading the most righteous, such as the Phantom, away from a life of heroism into one of indolence and drug-taking.

He was the overweight surfing pig known as Captain Goodvibes, probably the most revered cartoon character in the rich history of surfing magazines.

Between 1973 and 1981, artist Tony Edwards' crude and politically incorrect creation smoked, swore and surfed his way into the hearts of readers of the iconoclastic Australian publication Tracks.

Edwards was a bespectacled, long-haired artist who didn't actually surf but embraced with enthusiasm the bohemian, alternative life of Sydney's northern beaches in the 1970s. He presumably recognised in surfers a tribe of individuals who shaped a life for themselves away from the mundane. And, for a non-surfer, Edwards is uncannily good at drawing perfect waves. The fact they are impossibly perfect is apt for the fantastic universe Goodvibes inhabits. 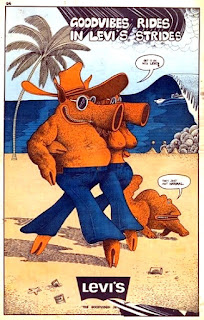 Goodvibes was the perfect fit for Tracks, the anti-corporate, anti-establishment newsprint monthly created by Alby/Albie/Albert/Albe Falzon (his given name changes with the years), a surf photographer and filmmaker.

That has certainly helped it reach infamous collectable status (a copy recently selling on eBay for $120), along with the appeal of the outrageous artwork by Edwards, who made Captain Goodvibes a household name through Tracks magazine.

We should let the Cap have the last word: "Surf's short, death's long, so's me dick, pass the bong."   Says it all, really.

And so this month's WOCK on Vinyl post ticks all boxes - its Weird, Obscure, Crazy and very, very Korny. Thanks to Mr. Weird & Wacky for this vinyl rip - MP3 (320kps) plus artwork.

Track Listing
01 Welcome To My World