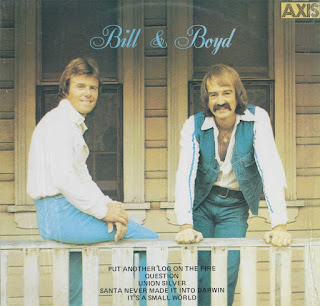 Bill & Boyd were a pop duo consisting of Bill Cate and Boyd Robertson from the Hutt Valley near Wellington. They were school mates at Wellington's Naenae College.

They started recording together in 1960, and relied heavily on doing covers of overseas artists' songs before the original versions made it to New Zealand. Their favourites were the Everley Brothers and they did well locally with versions of "Cathy's Clown" and "Crying in the Rain".

Their first year was spent on the Peak label, where they recorded five singles during 1960 and 1961. The most successful was their cover of "Corrina Corrina". They switched to the Philips label late in 1961. In 1963, the duo moved to Auckland and joined the Peter Posa tour with Max Merritt and the Meteors, Dinah Lee and Lou and Simon. 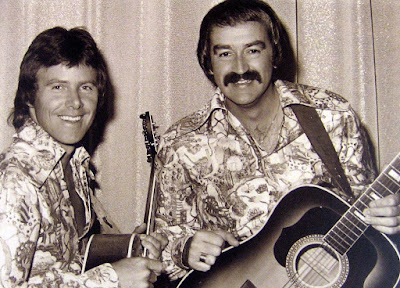 In 1964, Bill and Boyd moved to Australia on the strength of their first Australian hit "Chulu Chululu". It was a bright, sing-along song recorded live at the Rotorua Sound Shell in New Zealand. The talented pair were quick to gain popularity, appearing regularly on TV, particularly on Bandstand, and working clubs around Australia. They left for America early in 1968, touring with the Supremes and Herb Alpert. 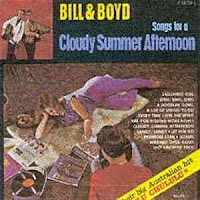 On their return to Australia, they established themselves as a top club act. In 1970, they joined Ron Tudor's newly formed Fable label. Their first release, in July 1970, was a version of "It's A Small World" which, although a steady seller, didn't quite make the top 40. They had several releases of singles and albums over the next four years. It wasn't until 1975 that they had their most success, after recording a song called "Santa Never Made It Into Darwin". The song documented the events of Cyclone Tracy that devastated the city of Darwin on Christmas eve 1974. The song made it to number 1 on the Australian national charts. Their 1975 album release was simply titled "Bill and Boyd". It was released in two formats, the first from Fable and the second from Axis (featured here). The Axis version contains two extra songs, one of which has not been available anywhere else, the Moody Blues cover "Question". 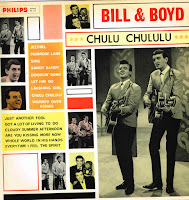 Another single called "Put Another Log On The Fire" followed, and Bill and Boyd were a household name in Australia.  Sub-titled “The Male Chauvinist National Anthem”, and described as “cheerfully offensive” by Allmusic.com, the song was written by US comic songwriter Shel Silverstein for the country artist Tompall Glaser. Besides stoking up the fire, the song’s narrator tells his girlfriend to cook him some bacon, patch his jeans, wash his socks, change a car tyre, fetch his pipe and slippers, and boil up a pot of tea. “Then put another log on the fire babe/ And come and tell me why you’re leaving me.” (The middle section goes into overdrive: “Now don’t I let you wash the car on Sunday?/ And don’t I warn you when you’re getting fat?” he sings, before suggesting “you’re too feminine to fight”).  Imagine trying to get this on the charts now !

Almost inevitably, the novelty song was a huge hit in Australia and New Zealand. It made #6 across the Tasman, and #5 in New Zealand after a 20-week journey through the charts. If it was an answer song to Helen Reddy’s ‘I Am Woman’, then it’s no wonder she responded with ‘Ain’t No Way to Treat a Lady’. In New Zealand, the song seemed unavoidable in 1975-76, not just through radio play, but also television advertising placed by Stewart McPherson, the promoter whose record label Stetson released it in New Zealand. 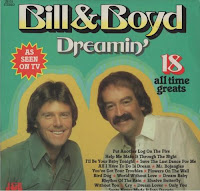 After that they took a break from recording and concentrated on touring. In 1978, they went back to America and under the direction of Glen Campbell recorded an album called "Companions", which was released in February 1979.

They continued to tour the club circuit in Australia until the late eighties, attracting quite a large following of loyal fans wherever they went. J & B Records have released an album of their all time greatest hits called "Dreamin' " and in 2003 we finally get a CD compilation from EMI of all their greatest hits. [extract from sergent.com.au]
. 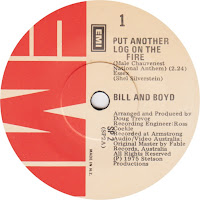 This post consists of FLACs ripped from my vinyl which I found still shrink wrapped in a pile of records at the market last week. Nothing like a piece of VIRGIN vinyl to get ya juices flowing I say.  Opening it was almost as good as popping the top off that first stubby in a slab of Fosters !   Full album artwork and label scans are included along with select photos.
Being the AXIS release, this album contains two additional tracks not included on the original Fable release, namely their Moody's cover "Question" and their hit single "Put Another Log On The Fire ".
Overall a great album featuring all of their major hits.
.
Track Listing 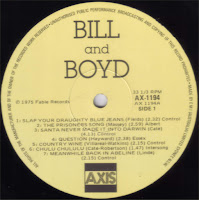