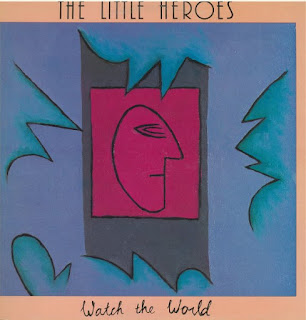 In amongst all the turbulence of line-up changes, The Little Heroes said bon voyage to Australia for a period during mid 1983, during which they recorded their third album ‘Watch The World’ at Farmyard Studios in the U.K., under the production supervision of Rupert Hine. The album surfaced in September ‘83, and went on to crack the top 50 in Australia. The title track single only rose to #73, but its follow up ‘Bon Voyage’ performed better (#51), though not to the level on the charts that would do justice to such a great song.
It was perhaps the commercial disappointment of ‘Watching The World’ that contributed to The Little Heroes calling it a day in June 1984. It’s a pity really because The Little Heroes seemed to be a band that were just hitting stride, as exemplified on ‘Bon Voyage’ and another great song from the same album called ‘Modern Times’. Whatever the reasons for The Little Heroes not reaching their absolute potential, they nonetheless left us with a fine body of work to savour. 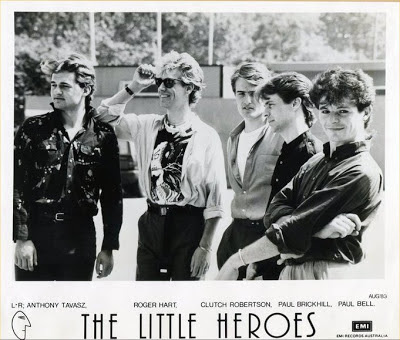 .
A Perth Newspaper reported on Little Heroes on 8th March, 1984. The following is a transcript from this article:

Heroes Return
Little Heroes 'Watch The World' set the standards for Australian albums last year through its fine production and engineering.
The band suddenly found itself being watched by the world as the heroes became more than your average Oz pub band.
Back in Perth this week for a series of dates, Little Heroes founder (and until now chief songwriter) Roger Hart looks back on 1983 as the bands most satisfying year.

"It was the year we solidified", he said on the phone from Melbourne this week. "Whereas in the past I would have only given the band a life of two years at any given time, it now has an unlimited potential".
The cause of this burst of optimism is the lads' belief that the finally-settled Heroes line-up offers a social consistency and musical individuality that's hard to beat.
Hart says all five members have very individual and different playing styles and songs are now developing through different styles rather than the head of one person.
The big change to the next album, which will be cut after a six month break the band intend to take a couple of weeks, will be in the songwriting.
"Songs will be written by everyone in the band for the first time," says Roger. "Before, I've written everything and to be honest, the job got boring.
"There is no competition. They just went along with what I was doing. This way its going to be much more stimulating. We intend to have about 30 songs from which to pick when we cut the album.
"And the sound will be sparser as well. In retrospect one of the faults with Watch The World is there was too much going on musically".
So watch Little Heroes, their next step is the world. Find out why by catching them around town this week [article by Mike Gee, sourced from Little Heroes Facebook Page]
.
Unfortunately, this fourth album never saw the light of day, as the band disbanded within 3 months of this article been written, when Roger Hart chose to leave in June, 1984.
One can only wonder what this album would have sounded like, given their plans to change direction in their song writing. The following album reviews for 'Watch The World' were sourced from three different newspapers / magazines (thanks to Little Heroes Facebook Page) and provide a wide range of viewpoints about this album.
. 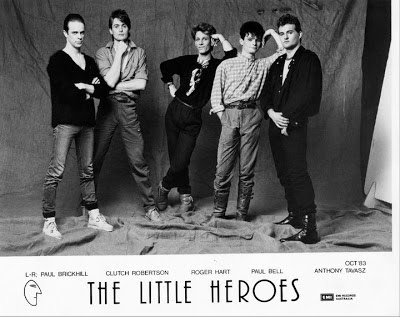 .
'Goodbye To All That' Review 1
The third album, although since lineup has drastically changed once again, one can hardly compare.
Nevertheless, main man Roger Hart seems to have got the best team and the best result this time (and recording in England with Rupert Hines hasn't done any harm either).
Music is more developed, less strict pop song forms, the prevailing mood is sombre, a bit cold even.
Still a band in search of gigantic hit and I can't hear it here. Perhaps if this lineup survives to make a second album, something more vital will have been forged [Artice by Greg Taylor]
.

Review 2
The Little Heroes 1982 album 'Play By Numbers' was a spotty offering sprinkled with gracious, heartfelt pop songs. Stained by the blood of a sentimental or street toughened heart, the fiery impact of these tracks was all too often doused-down by monochromatic tunes included for the sake of being modern rather than moving.
'Watch The World' is an album of greater substance  and less obvious commercial intent. It's not that the accessibility is missing. It's just that it is more strategically placed. The stuff borne of a band actively maturing and of a wild-hearted, clever minded producer like Rupert Hine.
On the title track, a suspicious choice for single release, the classy synthesizer works like a fuel-injection system, only spurting out its energy when necessary. Roger Hart's nasal, theatrical voice, arguably more suited to picturesque ballads, does a fine job bleeding the ordinary, hard nosed chorus. And, somehow, despite the lack of flair of this track, it becomes five minutes of lyrically-superior rock and roll. Yet it is far from The World's main beauty spot.
That honour goes to the chorus-dominated squelching guitar play "Modern Times". It's not hard to imagine this stern rhythm working well in the ash-filled pub corridors. It's got the energy, it's got the message and it's for the melody to make sure it reaches the right destination.

Even Hart's usually controlled, intellectual vocals prefer to make the path of the roads' scholar rather than the Rhodes Scholar. Ditto for the dynamic, complex "Beating Drums", another track that reveals the band's love of a big production chorus and hectic percussion  division.
One sad aspect of Watch The World is that the magic mix of lovely, terminal nostalgia and peachy, timeless memories, so ideally sketched on "One perfect Day" is not quite replicated here. "Bon Voyage" tries in vain to emulate that classic tune. It is a love story read from the lips of a tourist that's filled with unrepentantly lazy guitars, scratching about behind Hart's dynamic enunciation's.
"Memories", also pursues rockstalgia. But alas, the heavy drum beat fuzzes out the hypnotic processes of the rhythm section, leaving the track to languish in no-personland.

If Rupert Hine has ensured that Little Heroes is more intent these days to twisting the mind rather than twisting by the pool, he occasionally gives them reign to blissfully bop. "Seventh Heaven", a Reels-like jingle jive and the more lyrically worthwhile "Whose Turn To Cry" are unserious, undemanding and unfair for anyone who can't dance. They happily break up all the gravity and grief in the World.
Finally, as the ultimate statement of the band's versatility comes the almost L.A sound of "Waiting". Sounding more like that other big 'Little' band from Down-Under, Heroes show that West Coast sounds can be injected with electric energy and vocal rudeness without losing any of their suaveness and cool [Article by Robert Vella]
. 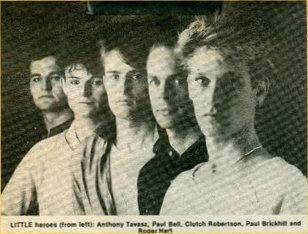 Review 3
The Little Heroes' third album is a sophisticated development of the flippant pop with its boppy rhythms that has dominated their previous albums. Unfortunately the romantic and emotional potential of Watch The World is never fully realised by producer Rupert Hine. With his characteristically compressed production, he has managed to wash away the melodies in a flood of synthesizer overlays. And it is so evident that even even the most sparse moments are brimming with harsh, synthesizer hiss. 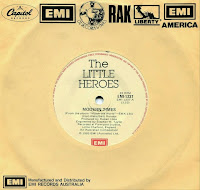 This is the first album from the current line-up of the Little Heroes and it's their most compatible and musically effective combination yet. Banished,blessedly, are their bopping rhythms. The new arrangements focus much more successfully on melodic layers than rhythms. There's some nice guitar melodies from Paul Bell and keyboard player Paul Brickhall (ex MEO245) has introduced some clean, emotive lines. Using Hine's own synthesizer and programs, the arrangements inevitably sound remarkably like Hine's own work. Baffling though is why the arrangements defy, if not outright ignore, the lyric line leaving the songs floundering somewhere between blatant pop and something more substantial. The Little Heroes force has always been their more melancholy songs and the highlight of Watch The World is undoubtedly "Bon Voyage", the song that originally drew Rupert Hine to the band. They've kept it simple, relatively clean and it shines as the logical successor to their biggest hit "One Perfect Day"
Watch The World in overview, however, is an incompatible meeting of the wrong band with the wrong producer. In other hands, this could have been a nice pop album with some soaring moments. As it is, it comes close but in the end the copious window dressing tends to smother rather than enhance the good ideas [Article by Andrea Jones]
.
Finally, below is a transcript of an article published in Juke Magazine (June 9, 1984) which talks about the band's decision to split.
.
'Little Heroes Split'
The Roger Hart-Paul Brickhall song writing team will stay together, but The Little Heroes have decided to split up The band's decision came as a shock. In an interview with Juke only a few months ago, on the eve of their going off the road to write and record the next album, the members indicated confidence that overseas recognition would take some time and suggested that they had the commitment to stick to it until then.
Certainly the news took EMI executives by surprise too. They had spent a small fortune getting English producer Rupert Hine to work on the Watch The World album and there was a strong indication Hine would also work on their next LP. The band also did well supporting Duran Duran on their Australian tour last year. 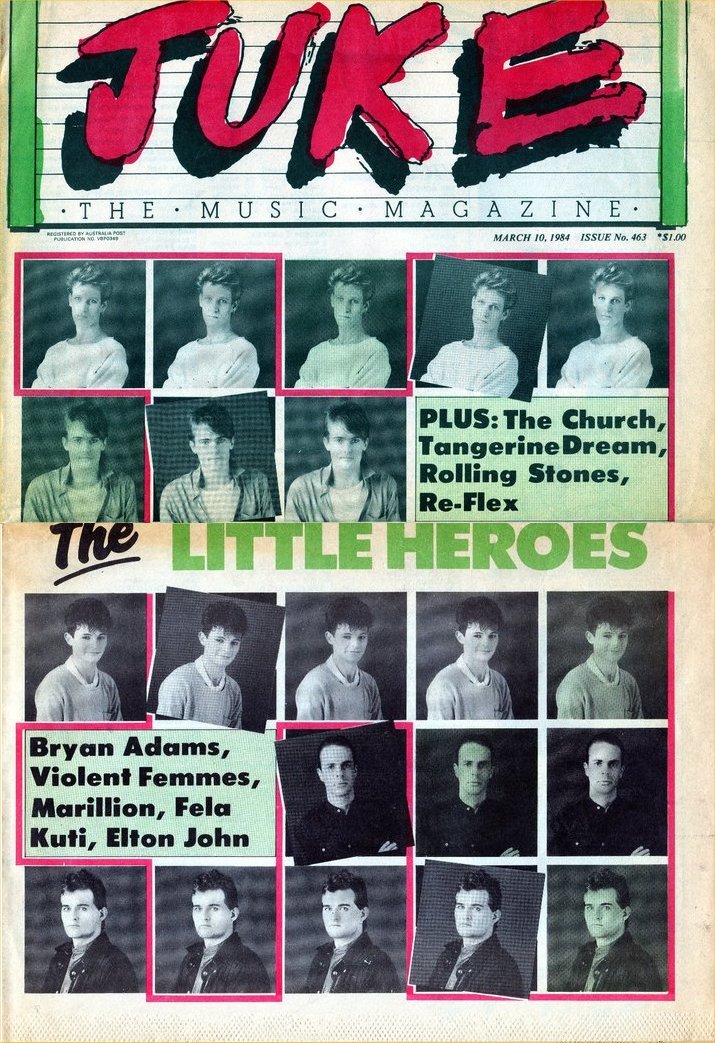 The Little Heroes were a band much praised by the Australian rock press but ended up having only a minor hit with "One Perfect Day" which momentarily widened their loyal cult following. [article by Jillian Hughes and Robbie Coates]
.
'Post Heroes'
* Roger Hart/Roger Wells went on to become an author and meditation trainer. His books on meditation are: Happy to Burn (Lothian 1997) and Love & Imagination. More recently his first novel, Levin's God was published by Fremantle Arts Centre Press (2004).
* John Taylor became a filmmaker and graphics designer, winning an AFI award in 1986.
* Paul Brickhill went on to head the Music Department at the Australian Ballet School.
* David Crosbie was the Chief Executive of Melbourne's Odyssey House, the largest drug and alcohol treatment centre in Victoria and is on the National Expert Advisory Committee on Drugs. He is now the Chief Executive of the Mental Health Council of Australia.
* Alan 'Clutch' Robertson worked for Warner Music for sixteen years in Australia, Malaysia and Singapore, after which he established Alan Robertson Management, representing bands such as Magic Dirt and TaxiRide.
* Martin Fisher became a Crown Prosecutor in the Northern Territory and played keyboards in popular Darwin band The Fabulous Baker Brothers [extract from Little Heroes Facebook Page]
.
This post consists of an FLACs and MP3 rip (320kps) taken from my Vinyl copy of this album. Full album artwork is included for both vinyl and CD. Note that EMI released both ‘Play The Numbers’ and ‘Watching The World’ albums on a CD twin pack in the 90s, but it’s been a while since they’ve been available to buy new. I would also like to acknowledge the use of photos included in this post which were taken from the Little Heroes Facebook Page, for which I am most grateful. 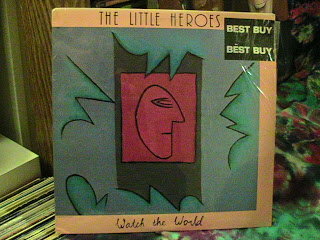