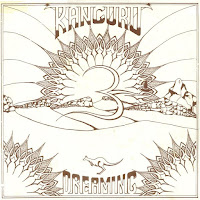 Kanguru were an Australian hippy band from around the early to mid seventies. They were based in Northern New South Wales in Nimbin and Byron Bay. Four mainly instrumental tracks are featured on this very rare Aussie album, the only known product from this band. Most of the musos still play music locally in other bands.

Ethno-acoustic prog with a heavy indian classical fixation. Also, a slight Mahavishnu Orchestra vibe. Some very earnest singing with lyrics about being a rainbow and a moonbeam. Nothing special. Play it for your mom if she likes Peter Gabriel.
Good for mellowing out with some nice sitar tinged songs here. I like "Waves Of Aquarius" the best with some nice playing from Cleis Pearce.

Four mainly instrumental tracks are featured on this very rare Aussie album,the only known product from this band. From the artwork through to the music this looks and sounds like something produced by a bunch of guru worshipping hippies, and it well might be. However on colder inspection it is possible that this was produced by a group of guys who made it with their tongues firmly implanted in their cheeks.

Firstly it is released on Larrikin records, a small Aussie label better known for Aussie blues and bush bands. Secondly, the members of the band offer some amusing alias’s: future Sirocco member Guy Madigan is 'Koalananda'; Paul Gibson is 'Sri Wombat', former MacKenzie Theory violinist Cleis Peace is 'Clear light'  and Keith Manning is 'Professor'. Not the typical alias's that you would expect.

Thirdly the label shows that it was produced in 1980, although sounding like it was recorded in the late 60 or early 70s. In fact, the album was originally released on Ranger records in 1976.

Fourthly, it seems more than a coincidence that Guru Guru released an album called Kanguru years earlier (also four long tracks). Notwithstanding, the quality of musicianship is excellent. This album is part meditative, part ambient and heavily Indian influenced.

Just for the record, Kanguru wasn't formed in Nimbin, although we toured the Northern Rivers and played several times at Nimbin and Blue Knob.

We played in Sydney and originally joined The White Company as musicians - later in 1976 we went to the Cotter River Down to Earth Festival where we decided to become Kanguru and gave the first performance there with Ion Pearce on cello [ Cleis's brother ]. I believe a video exists from the festival but haven't been able to track it down.

Some taped masters still exist of ABC recordings from Forbes St studios and Wayside Chapel concert. Paul and I have discussed releasing these tracks and others as archival material. Maybe a record company would be interested? [comment by Keith Manning on MidozTouch Forum]

Cleis Pearce
Cleis has a long history playing violin and viola in many creative musical ventures, including improvising and writing music for contemporary dance and poetry performances. She has recently toured and performed with Gyan and Michael Leunig, Yuval Ashkar, Dha, Coolangubra and many more. Cleis is one of the country's finest melodic improvisers, and can keep an audience in raptures with her soaring virtuosity, tone, and facility on the violin and viola. Cleis is alco reknown for playing Violin and viola with the Progressive rock outfit Mckenzie Theory back in the early 70's, before joining Kanguru in 1975?. Cleis, also made 3 albums in the 90's in a band she formed called Coolangubra.  (see ambientmusicguide.com).
She currently  lives/plays in Northern NSW in Byron Bay. To view her latest release see her bandcamp page.

Keith Manning
Keith is an accomplished musician who trained under a tabla guru in India for 16 years from 1975 to 1991. He has spent the past 30 years performing Indian and fusion music in Australia.
Keith was involved with the Indian musical society called Sangeet in Sydney during the 1970s and 1980s and was a member of the band Kanguru during the late 1970s playing east / west fusion music.

During his time in Bathurst, Keith has become heavily immersed in the local music scene. He played frequently with Matt Williamson, he performed at Cabaret Kite, the End Festival and Inland Sea of Sound Festival. Keith was also a frequent presenter for the 2MCE radio station over the past 10 years, starting his 'Out Of India' program in 2008 shortly after moving from Sydney to Bathurst with his family, and has only just recently retired. [extract from the Western Advocate]
. 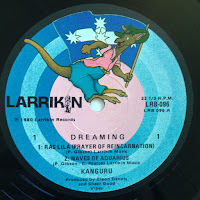 This post consists of MP3 (320kps) ripped from a Larrikin vinyl release found circulating on the web some 10 years ago. It includes full album artwork and label scans (sourced from Discos.com).
Oddly enough, Chris Spencer lists this album in the Who's Who of Australian Rock as being a MLP but the total length of the tracks exceeding 40 mins clearly places this release as a standard LP.
This album remains a lost Australian classic from the progressive years in the early 70's when bands were experimenting with different string and wind instruments, and should be approached with an open mind. Mine was certainly blown apart when I first listened to Kanguru.

Note: many previous postings for this album have provided inaccurate details relating to the band members, with Oshia White being referred to as Ashia, Paul's 12-string guitar magically having 2 extra strings and Guy Madigan's double ended drum misspelt every which way except pakhawaj
.
Track Listing 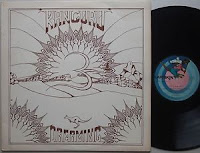