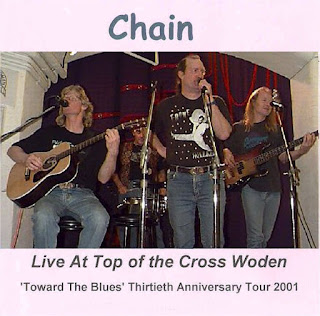 Chain are an Australian blues band formed in Melbourne as The Chain in late 1968 with a lineup including guitarist, vocalist Phil Manning; they are sometimes known as Matt Taylor's Chain after lead singer-songwriter and harmonica player, Matt Taylor. Their January 1971 single "Black and Blue", which became their only top twenty hit, was recorded by Chain line-up of Manning, Taylor, drummer Barry Harvey and bass guitarist Barry Sullivan. The related album, 'Toward the Blues' followed in September and peaked in the top ten albums chart.

Chain had various line-ups until July 1974, they separated for several years then reformed in 1982 for a one-off concert and more permanently from 1983–1986. Further line-up changes occurred with some forms called Matt Taylor's Chain, from 1998 Chain members are Harvey, Manning, Taylor and Dirk Du Bois on bass guitar. Both Manning and Taylor have also had separate solo careers. In 2005, Chain released, 'Sweet Honey' and continued touring irregularly; on 3 May 2009, they performed at the Cairns Blues Festival.
.
Full Biography
The highly acclaimed band formed originally in 1967 and early members included Wendy Saddington, Claude Papesch and Tim Piper. As is the case with many super groups, they were plagued with membership changes and featured over thirteen different line-ups.
Throughout 1969 they established themselves as Australia's top blues band and, in October, they released a single called 'Mr. Time'. Then, early in 1970, they added Glyn Mason (ex-Rebels - guitar, vocals) and recorded their amazing Chain . . . Live album. Before the album was released they announced that they had split up, with Glyn going to London and Warren joining the Aztecs.
However, Phil and the two Barrys went to Brisbane. By the time the album was released in September, they had reformed with Matt Taylor (ex-Genesis — harmonica, vocals). The new Chain was quick to record a heavy blues song called "We're Groaning", which was released early in 1971 under the title of "Black And Blue". It became their biggest single. The record was snubbed by radio stations, but sold mainly as a result of audience reaction to their live performances of the song. It was also released in the US on United Artists' Avalanche label. 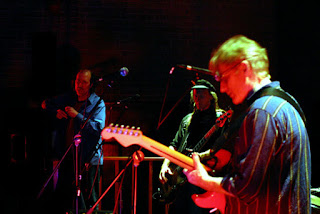 A follow-up single, "Judgement", came in July 1971 accompanied by more rumours of a split. The reports proved to be well founded as Phil departed to be replaced by Charlie Tumahal. The following month Barry Harvey dropped out and Lindsay Wells took over.
The new format didn't seem to click and finally disbanded in October 1971.
However, just like the cat with nine lives, in January 1972 a new Chain surfaced as a trio featuring Warren Morgan, Laurie Pryor and Barry Sullivan. They relied on dominant piano as a substitute for guitar. Then, early in '72, another album, 'Chain Live Again', was recorded, but it actually featured a re-union of old Chain members (Glyn Mason, Warren Morgan, Phil Manning, Barry Sullivan and Barry Harvey). Due to mixing difficulties, the album was not released until later in the year. Meanwhile Chain's quorum formed a group called Mighty Mouse. This new band was not successful. Yet again, in early 1973, another Chain surfaced with the two Barrys, Ian Clyne, Mal Capwell and Phil Manning.
In its '73 form, the band released singles including "I Thought You Were My Friend" (August), "Gonna Miss You Babe" (December), and the 'Two Of A Kind' album (December).
. 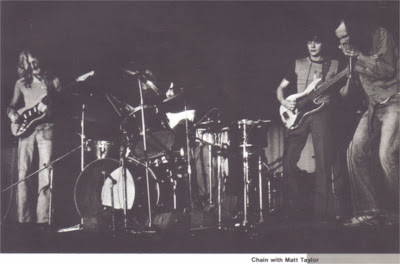 .
Then, in January 1974, whilst the group were touring Queensland, Barry Harvey decided to leave and stay put. He was replaced by Tony Lunt (organ, moog). The following month both Mal Capwell and lan Clyne left and, although Chain again regrouped, the band met its final death midway through 1974.
Phil went on to work solo and formed the Phil Manning Band in 1975. Then, in 1977, Phil formed a new band called, simply, Manning.
.
This post consists of MP3's (320kps) ripped from a bootleg taped recording and includes custom artwork (thanks to WoodyNet from Midoztouch). Appropriately titled - 'Chain Live at Top of The Cross' this recording was made during the Toward The Blues 30th Anniversary Tour in 2001, but the exact date is unknown. Because it is an audience recording, there was a lot of digital noise on the last 2 tracks which  really detracted from the whole gig, so this post is short by 2 tracks. Otherwise, this is a historic recording that has captured Chain making a huge come back in the 21st Century.
.
Track Listing
01 - Run With Willy           (6:11) 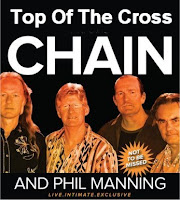