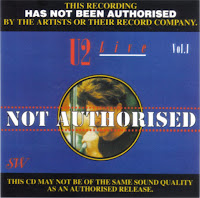 This Bootleg CD released by AMCOS captures U2 live at the Hammersmith Palais on December 6, 1982, during the very limited “Pre-War” tour. All of the classic early U2 live staples are present, as well as some of the best tracks from their soon-to-be-released War album at the time. The encore even contained a very rare live performance of the 1982 single “A Celebration,” and that alone makes this bootleg a must for any U2 fan. Note: I sourced this additional track from the web, as it was not included on this AMCOS release.
.
Concert Review
This was the first gig I went to - a gangly 14 year old clutching a ticket that says "over 18s only". I put on a jacket that made me look, oh, 15 easily, but they never even gave me a glance at the door. I was in.
I'd not heard of support act 'The Alarm' - a dreary band playing to an indifferent crowd. After an interminable wait, U2 appeared (or at least I thought) and the place erupted like the Brixton riots. I was getting trashed in the mosh pit, mostly facing the wrong way... eventually I realised that I didn't even recognise the song, and they looked and sounded different. Escaping upstairs to the balcony, I eventually figured it out - THIS was The Alarm (already with a mysteriously huge fanbase) and the dreary band before had been the unbilled Zerra 1. 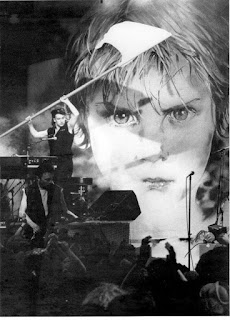 "If this is how the crowd are for The Alarm", I thought, "what on earth are U2 gonna be like?"

Eventually I got my answer. It was indescribable (he said, before trying to describe it). From the balcony, the entire floor below bounced as one from the first note to the last. I remember New Year's Day for the first time, the spotlight on The Edge for his solo. Gloria... I Will Follow... no, it's no good I can't describe it. For a first gig, for a 14 year old, it was complete overload.

Needless to say, it was the best gig I'd ever seen, as time has subsequently proved. Nothing beats the first time, I guess, but even so. I saw U2 again a few months later at the Odeon, 5 minutes walk away, and it was a pale imitation, with its raked seating. The Hammersmith Palais remains holy ground to me, despite all the clear evidence to the contrary.

Footnote 1: The gig was recorded and broadcast by Radio 1 for their In Session series. Radio London used to simulcast Radio 1 in the evenings, so I got a good quality stereo recording (fantastic mix too, really captured it), which I played to death until I left my bag on the train one day losing both Walkman (whatever) and Cassette (nooooo!). A few tracks made their way onto the October Special Edition CD... one day I might get hold of the full hour again, you never know. 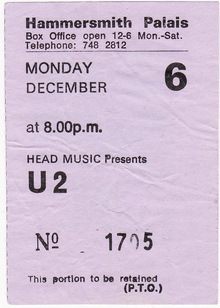 Footnote 2: 18 years later I was working for the BBC on Top Of The Pops. U2 were on in the studio, the first time since I'd worked there, playing Beautiful Day. I couldn't help myself. I hung around and managed to barge in for a quick chat with Bono. I told him about the first and greatest gig of my life - he asked the date and venue, and said "oh YEAH, that was rockin'!" Who knows if he really remembered, but it was enough for me. Incidentally, Bono had asked me who else was on the show that day and I told him - Doves "Oh wow!" and a new band called Coldplay (I'd played Yellow obsessively) - "oh, Edge really likes them", he said. Later I told Chris Martin, who was watching U2 rehearse... he looked at me bug eyed and blurted out "you're shitting me?!!!".

Always been proud to have been the person that told Coldplay that U2 liked them. Sorta. [Review by Guy Rowland]
. 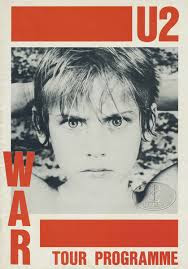 The full set list for this concert was:
-Out Of Control
- Twilight
-Surrender
-I Threw A Brick Through A Window
- A Day Without Me
-An Cat Dubh
-Into The Heart
-Sunday Bloody Sunday
-The Cry
-The Electric Co. / Send In The Clowns
-I Fall Down
-October
-New Year's Day
-Gloria
-I Will Follo
encore(s):
-Fire
-A Celebration
-11 O'Clock Tick Tock / We Wish You A Merry Christmas (snippet)
-The Ocean
.
This post consists of MP3 (320kps) ripped from an AMCOS CD release and includes full album artwork for both Vinyl and CD releases of this bootleg.  Note: Golden Stars (Italian bootleg) released this concert on vinyl (with a distinctive red cover) in 1991 as a double LP set and copies of this bootleg have recently fetched $150 +
This concert has also been released under the title of 'Live At Hammersmith 1981 - Bloody London ' with an obvious 'year release' error in its title, and by Mainline Music under the title 'U2 Live Unlicensed'.
.
Track Listing 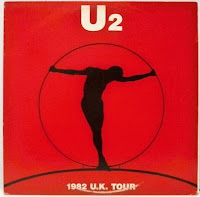