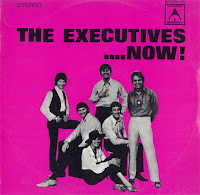 Original line-up: Carole King (vocals); Brian King (piano, organ); Keith Leslie (vocals, saxophone); Garry King (saxophone, vocals); Dudley Hood (guitar); Rhys Clark (drums).
Sydney based group The Executives formed in the latter half of 1966 and quickly became Sydney's most highly rated band. Their musical expertise was unequaled. Between them they could play a total of thirty one instruments — anything from violin to harpsichord.
The band began releasing singles virtually straight away with 'You're Bad' and 'Wonder Boy' (which sold well in Sydney). Meanwhile, changes were taking place in the line-up. The most important being Ray Burton replacing Dudley on guitar, and Gino Cunico replacing Keith. (Other membership changes included Brian Patterson.) In July 1967, they experienced their first national hit with "My Aim Is To Please You". It was followed by "Sit Down I Think I Love You".
They soon became known as Australia's top sophisticated rock band, and in 1968 they left for the US to have a crack at the American market. Whilst in the US, they scored a recording contract with the Buddah label. Back home, they continued to record. By mid '69, they had released six singles, three EPs and one album. Unfortunately, most of their chart success was primarily in Sydney (one of the bigger latter hits being 'Windy Day').
In the spring of '69 they returned to the US and changed their name to Inner Sense, but they became bogged down. By the following year, the group had disbanded. Ray joined Ayers Rock (and co-wrote 'I Am Woman' with Helen Reddy); Gary and Rhys stayed in America and worked as session musicians; Gino went on to work solo (he later released an album); and Carole and Brian formed a new group called Transition. The new group was just that — a transition. In other words, it was an interim band until they could find the right combination of musicians to reform the Executives. 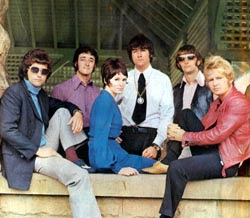 Finally, in June 1974, they hit on the right line-up with Alan Oldman (bass); Ron Smith (guitar); Brian Kirby (drums); Jonne Sands (vocals); Carole (vocals); Brian (keyboards). They signed with Polydor and subsequent releases included "On The Road Back" (July 74); "Let The World Go Round" (April 76); and "Tinker Tailor" (October 76). By the end of 1977, they were still working solidly at hotels and clubs.
After The Executive's folded for good in 1978, Brian and Carole King continued to team for studio sessions. Sands resumed a moderately successful solo career, mainly as a club performer. Bassist-guitarist Alan Oldman (formerly a member of legendary Lithgow band The Black Diamonds) continued with session work, contributing to Nuclear and wrote the music for the 1979 film Alison's Birthday. [extract from Noel McGrath's 'Australian Encyclopedia of Rock', Outback Press, 1978, p106-107]
The Executives left behind a body of fine records that are highly sought after by collectors of quality sixties Aussie pop, although it has to be said that they have been lamentably overlooked in terms of CD reissues. Nevertheless, The Executive should be remembered for their sophisticated and inventive sound, those gorgeous vocal harmonies, their accomplished musicianship and their mastery of the three-minute pop single idiom. [extract from Milesago Website] 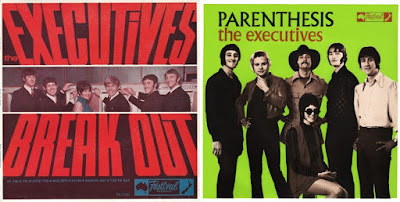 Album Linear Notes:
The Executives are the top pop group in Australia today.
The group has had great success at dances, discotheques and store promotions all around the country. They have appeared on many of Australia's top television shows and their records have done very well, especially in the eastern states, where "My Aim Is To Please You" and "Sit Down I Think I Love You" (both included on the record) reached positions two and three respectively.
They are a dedicated group of true musicians, each with long.family traditions of musical lore, and each with personal backgrounds of intensive training and rare instrumental techniques . . a highly individual and dramatic sound has been developed by this talented combination. 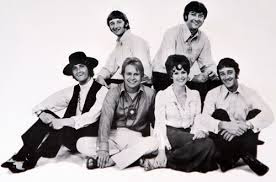 The members are...
Carole King-a very attractive brunette, has been singing as long as she can remember. Was in her school drama club and opera group, and training in singing was evident throughout her school career. With her sister and other girls formed her own singing group. Has been singing with The Executives since their inception and sees her musical career bound up with the group's success. Gino Cunico-lead male vocal, is the youngest and latest member to join The Executives. Born of Italian parents, he commenced his musical career as a boy vocalist and appeared on most of Australia's pop television programmes, including the top rated show "Bandstand"
Brian King—started musical training at the age of five, and gave his first public recital at the age of eight. Was playing professionally when only 13, later played through hotel circuits and night clubs— hard going that develops concentration, stamina and experimental techniques as well.
Ray Burton-lead guitar. Ray has been in Australian show business for around six years. His first professional engagements were with a very successful group, The Delltones, later he joined The Executives and has appeared with the group during the past eight months.
Gary King-bass guitar is Gary's specialty, and his free approach and versatility make a solid contribution to the distinctive 'Executive' sound and quality.

Rhys Clark-like the Trapp Family all Rhys' family are musical, helped along with a strong streak of Welsh ancestry. Rhys' musical quota is rhythm, drums all the time, heightened with a boyhood period spent on Cooke Island, north of New Zealand, where native rhythms and drum techniques provided a unique background-for his later adventures in sound. Bought his first full drum kit at 13 and soon formed a youthful group of piano, trumpet, sax and of course his own drums. Securing professional engagements while still at school. Then followed years of engagements at ballrooms, night clubs, coffee lounges—years in which techniques in drumming and additionally in singing were polished to recording standards —for Rhys already has successful records to his name. 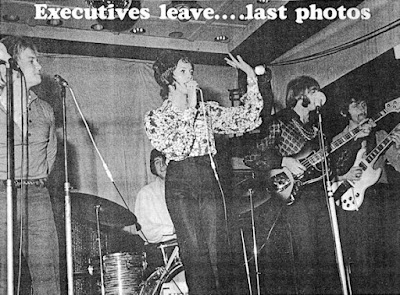 .
This post consists of FLACs and MP3's (320kps) ripped from my trusty vinyl copy and includes full LP artwork, along with label scans. Although a low budget album release (typical of the Summit record label), I really like the tracks on this album, in particular the tribute medleys to the Mamas & Papas and the Hair Soundtrack. Sure, the music is dated but they still sound good to me.
(Thanks to Jae and Woodynet for the two B&W photos above)
. 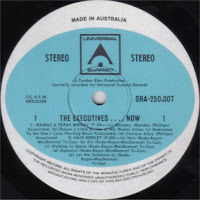 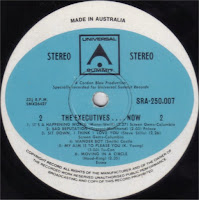