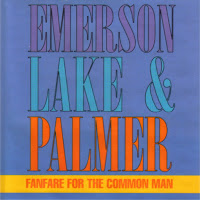 One of the first big super groups, formed by ex-members of Nice, King Crimson and Atomic Rooster in 1970. Characterized by their fusion of classical music with rock and noted for their spectacular live performances they were an archetypal progressive-rock band of the early Seventies.
An early plan to link up with Jimi Hendrix and Mitch Mitchell proved abortive (in fact Emerson, Lake aborted it themselves when a "wigged-out" Mitchell came to see them with two bodyguards) and Carl Palmer, ex of Atomic Rooster, completed the trio. As such, they made debut at Isle of Wight Festival 1970. 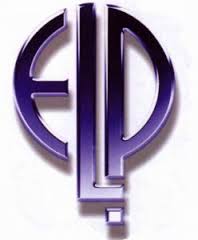 Keith Emerson had already established unique reputation as organist supreme, coupling natural ability with daring acrobatics involving flung daggers, organ-vaulting, Hammond-raping and general musical sadism towards his equipment - all of which made him the most spectacular rock showman since Hendrix.
Greg Lake, from Bournemouth, a sedate South England coastal resort, had cut his vocal teeth with Crimson, while Palmer had played with Chris Farlowe's Thunder-birds at the age of 16, subsequently joining Crazy World Of Arthur Brown and Atomic Rooster.
All were beginning to stagnate in previous roles and the new partnership gelled immediately into a unique and dynamic trio, firmly dedicated to musical finesse and showmanship. From beginning, they established a reputation as furiously active trio of unsurpassed technical ability - though some critics felt their music as evidenced on debut 1970 album didn't compensate for a certain lack of feeling exacerbated on successive collections.
Signed to Island Records, their self-titled debut album was an immediate success, making the Top 5 in the UK and the Top 20 in the US, while their live rendition of Mussorgsky's 'Pictures At An Exhibition' made the Top 10 on both sides of the Atlantic in 1971.

Nevertheless, there were signs that a change of style was necessary, however, when the 1972 set Trilogy failed to equal success of predecessors (though, like Pictures, it did eventually go gold in U.S.). Experiments with effects machinery, including trial of a fully-portable stage, failed to lift group out of musical rut which - with hindsight - was inevitable from beginnings of band.
After the successful 'Brain Salad Surgery' (1974) overlong, self-indulgent solos became commonplace especially on 'Welcome Back My Friends To The Show That Never Ends', a triple album recorded on their 1973-4 US tour.
. 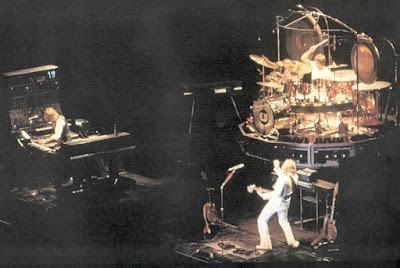 A three-year gap ensued, Lake and Emerson scoring surprise solo chart placings with 'I Believe In Father Christmas' and 'Honky Tonk Train Blues' in 1975 and 1976 respectively. Regrouping in 1977 with 'Works Volume 1', they found it increasingly difficult to recapture their former glory, and disbanded in 1978 following the poorly received 'Love Beach' album. Unsuccessful re-formations occurred in the late Eighties: 1992 finally saw the trio touring again and releasing their best album in years, 'Black Moon'. It is this tour from which this Bootleg recording has been made, taking place at the Jones Beach Amphitheater, Jones Beach, Wantaugh, NY on July 25th, 1992.
.
Concert Details 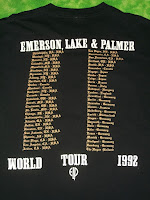 This AMCOS bootleg is from Jones Beach in Nassau County, Wantaugh, NY, on the summer evening of July 25th, 1992.  This is the second night of the tour and is sourced from a very good audience recording.  It was previously available unofficially on Carillon (RPCD 1104) and Live At Jones Beach (Continental Sounds SIAE CS.CD5-511) both issued soon after the event. The short “Karn Evil 9 - Part 2" reference starts the show.  It lasts only ninety seconds, just enough to sing “welcome back my friends to the show that never ends” before segueing into the “Tarkus” snippet.  The new songs sound magnificent against the older songs.

Of particular note is “Black 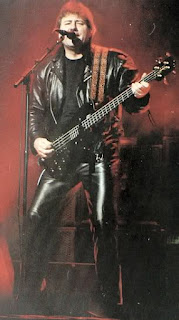 Moon” which crawls upon the stage much like “Tarkus” did in the early days of the band.Missing on this release, Emerson begins but then stops “Creole Dance.”  'Sorry, I have to reconnect my midi' he explains bring shades of the rehearsal in Philly a couple nights before.  This segues into his own solo tune “Close To Home” (also missing from this release) which in turn serves as an introduction to “From The Beginning” which emphasizes Greg Lake.“Lucky Man” sounds beautiful in this recording with Palmer underlying the soft ballad nature of the piece.  The show ends with “Pictures At An Exhibition” which lasts almost twenty minutes and includes Palmer’s drum solo in the middle.  The encore is a medley of “Fanfare For The Common Man,” “America” and “Rondo” with references to Bach thrown in all lasting about fifteen minutes long [extract from collectorsmusicreviews]
. 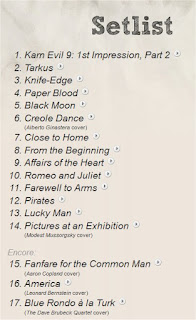 This post consists of MP3's (320kps) ripped from my AMCOS CD release and includes full album artwork for both CD and Cassette Tape (which I also own).  As mentioned above, four tracks from the full concert have not been included (see left), I assume because AMCOS wanted to restrict this to a single CD release due to length constraints. Determining the source of this concert was not easy, but both Bootleg Zone  and Covers At An Exhibition confirm my conclusion with track lengths matching those listed by these sites.
The equivalent vinyl release for this concert was called 'Jones Beach 25th July 1992' released by Sanctuary Records (see cover below).
The recording on this bootleg is excellent - so get it now !
.
Tracklisting
01 - Karn Evil 9 (First Impression)
02 - Tarkus 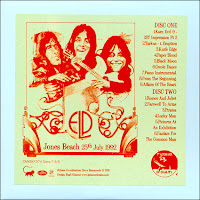