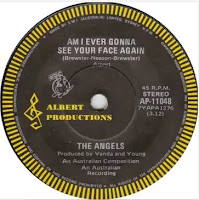 This month's W.O.C.K On Vinyl is the result of something that was brought to my attention by a regular blog follower (Dave). I was mortified to learn that The Angels' iconic anthem "Am I Ever Gonna See Your Face Again" is so much like Status Quo's B-Side single "Lonely Night" which was released 2 years earlier, that one can't but conclude that their song is a rip off.
Originally a slow acoustic ballad about death, the Angel's song became immortal thanks to an expletive-laden chant grafted on to the chorus by the band's fans when audiences began shouting “No way! Get fucked! Fuck off!” in the empty space in the chorus after Neeson’s lingering question. 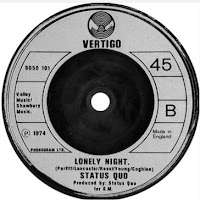 In an article written by Darryl Mason for The Guardian, he states "Bassist and vocalist Bernard ‘Doc’ Neeson came up with "Am I Ever Gonna See Your Face Again", and a version was recorded for the band's debut album. Vanda and Young were convinced it would be a hit, but its likeness to a Status Quo B-side, "Lonely Night", became impossible to ignore. So the Angels re-recorded the song, speeding it up, and adding the "ambulance siren" opening guitar riff.
Released in March 1976, the single stalled at No 58 in the charts. A third version was recorded in 1978 for US release and also flopped. However, subsequent songs like No Secrets, Take a Long Line and I Ain’t the One succeeded where See Your Face Again had failed, and by the late 70s the Angels were in the front rank of Australian rock.
"Back in the 80s, Neeson told reporters that the song began its life as a slow, acoustic ballad. The inspiration for the lyrics, he said, came from hearing a friend describe his grief following the death of a girlfriend in a motorcycle accident. He didn’t mention Status Quo’s Lonely Night, or its remarkably similar key line, “I never thought I'd see or hear you again.”
.

Ian Brock has commented on YouTube that "In the book 'The A-Z of Status Quo' by Dave Oxley, it tells the story - An international tribunal ruled, based on evidence by a musicologist, that The Angels song was a mere copy of the original Quo version which was written and recorded almost 2 years before. A percentage of all income from the Angels is paid to Status Quo. This is one Aussie who knows the true story".
However, Denis Mac has commented on YouTube that "Actually Quo don't get royalties from the Angels. John Brewster from the Angels was later in a band with Alan Lancaster called 'The Party Boys' and the royalties are all fiction and the supposed 'coincidence' was first brought to the attention of the world through a Parody Website."
.
No matter what the situation was, there is no disputing that both tracks are very, very similar both in melody, rhythm and lyrics.

The reason why very few people know about this plagiarism I think is because Quo's single was a B-Side track (to Break The Rules) and did not appear on any of their albums.  Now there is no taking away the fact that the Angel's rendition of this tune was one of the most popular songs ever played in pubs around Australia back in the 70's and 80's but the iconic status of this anthem is up for review in my opinion - what do you think?
.
This post consists of MP3 (320kps) of both tracks in question along with label scans for each single, and the C in W.O.C.K on Vinyl this month could very well stand for Copyright breach.

Posted by AussieRock at 9:27 PM