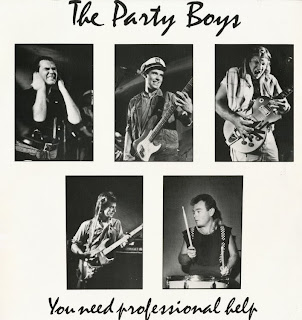 The Party Boys were originally formed by bassist Paul Christie as a one-off cover band for a two-week tour, beginning an odyssey that eventually ended ten years later, after several successful albums that comprised some of Australia's most successful performers.

After leaving Mondo Rock in 1982, Christie called up several friends to form a band to perform cover songs on the pub circuit. They proved so successful that a live album was released of their fourth gig, titled 'Live at Several 21st's', and it reached number nine on the Australian national charts in March 1983. James Reyne went back to his band, Australian Crawl, and Richard Clapton took his place as lead singer. This lineup released another album, Greatest Hits (of Other People), which reached number 25 nationally.

While on a break between Dragon tours (during which Marc's former bandmate Paul Hewson died unexpectedly, in January 1985), Hunter joined The Party Boys for a sold-out national tour, recording the album 'You Need Professional Help'.

In 1986, Angry Anderson (from Rose Tattoo) took over lead vocals under another revised lineup: Christie (now playing second drums), Kevin Borich, Richard Harvey, John Brewster (ex-Angels), and Alan Lancaster (ex-Status Quo). With John Swan (from Swanee) replacing Angry Anderson, this was the lineup that ushered in the Party Boys' most successful phase.Their self-titled album 'The Party Boys' was released in December 1987 and included six original songs. The single "He's Gonna Step on You Again" reached number one in June 1987. At the height of their success, singer John Swan left to work on a film, Chase the Moon, which was never completed, and was briefly replaced by Graham Bonnett. Swan returned for the Party Boys' support to AC/DC's February 1988 Australian tour. Joe Walsh returned in late 1988 and appeared on the band's next studio single, "Follow Your Heart," released in March 1989. Later that year, U.K. bluesman Eric Burdon became the Party Boys' seventh lead singer. 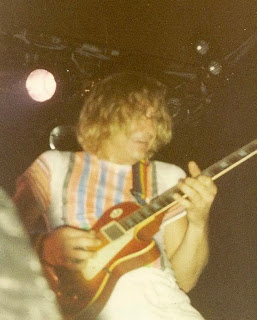 In late 1989, Christie put together a new recording lineup: Ross Wilson on vocals, Stuart Fraser on guitar (from Noiseworks), Rick Mellick on keyboards, Dorian West on bass, Adrian Cannon on drums, and Kevin Bennett and Alex Smith providing backing vocals. Wilson's original vocals on their next single, a cover of Manfred Mann's "Doo Wah Diddy Diddy," couldn't be used due to contractual reasons, and singer Vince Contarino, from Adelaide cover band the Zep Boys, re-recorded the vocals. Released in early 1990, it peaked at number 24. A final Party Boys single, Billy Preston's "That's the Way God Planned It," was released in September 1992. The Party Boys were at an end and Christie wrote a book about the music industry, The Rock Music Self Management Manual, and became a band manager himself. [extract by Brendan Swift at All Music.com]
.

You Need Professional Help is the fourth album by the Australian rock band The Party Boys. The line-up for this release was founding members Kevin Borich and Paul Christie, plus Joe Walsh, Dragon vocalist Marc Hunter and former Divinyls drummer Richard Harvey. Following the tradition set by the band's other albums, this was a live album recorded during a national tour and features no original tracks. However, some tracks were the players' own work, such as "Rocky Mountain Way" from Walsh's 1973 album The Smoker You Drink, The Player You Get, "Rock 'n' Roll is a Loser's Game", a Hunter song from his album Big City Talk and "Don't Let Go", a Kevin Borich Express song. "Duelling Guitars" may qualify as an 'original' and was presumably created as a crowd-pleaser by Borich and Walsh. Artists covered by the band on this album include Bruce Springsteen, Eagles and Jimi Hendrix. You Need Professional Help was recorded at the Moby Dick Surf Club.
. 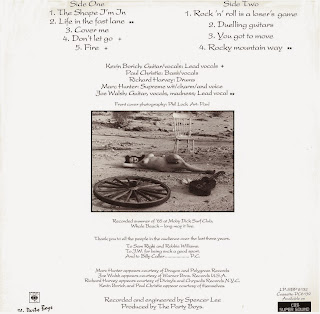 This post consists of both FLACs ripped from my crispy clean vinyl and includes full album artwork for both LP and CD.
(Thanks to Freypower for photos of Marc & Joe).   These boys certainly don't need professional help when it comes to doing covers of great rock classics, and hold their own on all fronts. Borich and Walsh bounce guitar licks off one another as if they were joined at the hip, while Marc Hunter proves that he's one of the best vocalist that has come out of New Zealand and sing on Australian soil.
The back cover of the album is a bit 'risque' and so I thought it worth while to put here for your judgment. Perhaps I need professional help?
. 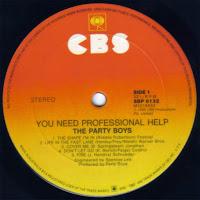