A terrific copy of this long deleted 2nd and final album from under-rated Sydney hard working rock band Finch. Their debut album Thunderbird is now considered a semi-progressive rock rarity and this effort isn’t that far from the mark either. Whilst their slow-tempo ballad single "Where Were You" rocketed to the top of the charts the remainder of the songs found here are in contrast consisting of more mainstream rock tracks with some neat guitar work.
This probably didn’t appeal to the teeny-bopper buying public at the time and consequently this album sold rather poorly and slipped between the cracks which is a shame really as it is a solid effort throughout with classy production and strong self-penned songs to carry it along at a great pace.
On the back of the No.1 single Finch ventured to the USA only to be told to change their name so as not to conflict with the local outfit of the same identity … so Finch was shelved and the new tag of Contraband emerged.
A highly recommended 70’s rock LP that is worthy of more than casual consideration … in fact I reckon it’s a real gem with some outstanding guitar rock tracks.
. 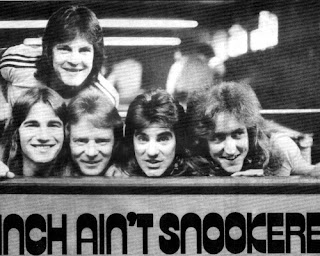 Finch trace their roots back to the mid-'70s Sydney-based band Stillwater which featured the talents of guitarist Graham Kennedy, drummer Peter McFarlane, singer Owen Orford, guitarist Gary Quince and Bob Spencer, and bassist Tony Strain. By 1976 they were known as Finch, over the next two years the recording five  tracks for the 1974 soundtrack 'Drouyn', and two studio albums - 1976's 'Thunderbird', and 1976's 'Nothing To Hide'.
And here's where is starts to get a little confusing.  By 1978 the line-up had coalesed around  former AC/DC bassist Rick Evans, guitarist Kennedy, drummer McFarlane, and lead singer Orford.  Following the release of their third Australia album 'Nothing To Hide' the band was signed by the American Portrait label.  The resulting exposure found the band's management concerned about the possibility of a lawsuit given there was a Dutch band operating under the same name.   With that in mind the band elected to morph into Contraband.   After making a slight and meaningless modification to the cover art, the album was released in the States under the Contraband moniker.  Produced by Peter Dawkins, 'Nothing To Hide' showcased material from three of the four members.
.

.
As lead singer Orford was pretty good - exemplified by performances like "Changes", "Say You'll Be There" and "Leave the Killing To You" he had a nice hard rock screech that was well suited to the genre, but not as irritating as the late Bon Scott could occasionally be.  In fact, that served as a good baseline for the entire album - AC/DC-styled hard rock, but more melodic and musically varied than much of the competition, with a couple of tracks even incorporating a modest, but attractive southern rock feel ('That's Your Way' and the ballad "Say You'll Be There").  Kennedy and former member Chris Jones were both accomplished guitarists adding the right amount of crunch to these tunes, while the Evan-McFarlane rhythm section was first rate throughout.   Admittedly the band occasionally brushed a bit too close to anonymous AOR ("Foolin''), but luckily those were the exceptions to the rule.   As I said, a surprisingly good and largely unknown late-'70s hard rock release that's well worth looking for.
.

Portrait  later issued Contraband’s debut single, "That’s Your Way", in October 1978 and in that same month, Barry Cram (ex-Avalanche) replaced McFarlane, who joined Swanee.
The Contraband Album was released in May 1979, accompanied by the singles "Rainin’ Again" and "Gimme Some Lovin" (a cover of the Spencer Davis Group track). The album created interest in the USA but was not successful in Australia. Portrait eventually dropped Contraband later in the year due to lack of interest and the band eventually broke up (Extracts from BadCatRecords with thanks].

.This post contains MP3's (320kps) ripped from a vinyl copy supplied by an unknown member of the original Midoztouch forum, along with full album artwork.  Thanks to HipTony2 for the above video recorded at the Adelaide Festival in 1978. This video clip was aired on 'Rage Goes Retro', ABC TV Australia, 18th January, 2014. I have ripped this video to mp3 and included it with this post as a bonus track.
This album is certainly a difficult album to come by, although I do remember seeing it in the shops when first released and coming very close to buying it. I was well into heavy rock at the time, so it probably didn't meet my selection criteria based on the single that was on the charts at the time.  Hindsight can be a cruel sometimes!
.
Track Listing

Posted by AussieRock at 6:55 AM