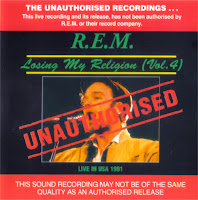 R.E.M. was an American rock band from Athens, Georgia, formed in 1980 by singer Michael Stipe, guitarist Peter Buck, bassist Mike Mills, and drummer Bill Berry. One of the first popular alternative rock bands, R.E.M. gained early attention due to Buck's ringing, arpeggiated guitar style and Stipe's unclear vocals. R.E.M. released its first single, "Radio Free Europe", in 1981 on the independent record label Hib-Tone. The single was followed by the Chronic Town EP in 1982, the band's first release on I.R.S. Records. In 1983, the group released its critically acclaimed debut album, Murmur, and built its reputation over the next few years through subsequent releases, constant touring, and the support of college radio. Following years of underground success, R.E.M. achieved a mainstream hit in 1987 with the single "The One I Love". In light of the band's breakthrough, the December 1987 cover of Rolling Stone declared R.E.M. "America's Best Rock & Roll Band". Consequently, the group signed to Warner Bros. Records in 1988, and began to espouse political and environmental concerns while playing large arenas worldwide. 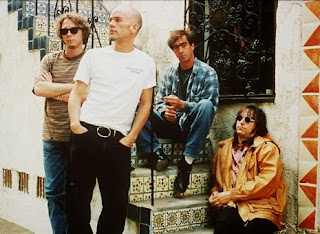 By the early 1990s, when alternative rock began to experience broad mainstream success, R.E.M. was viewed by subsequent acts such as Nirvana and Pavement as a pioneer of the genre and released its two most commercially successful albums, Out of Time (1991) and Automatic for the People (1992), which veered from the band's established sound.
Out Of Time's lead single "Losing My Religion" was a worldwide hit that received heavy rotation on radio, as did the music video on MTV. "Losing My Religion" was R.E.M.'s highest-charting single in the US, reaching number four on the Billboard charts. "There have been very few life-changing events in our career because our career has been so gradual," Mills said years later. "If you want to talk about life changing, I think 'Losing My Religion' is the closest it gets"
R.E.M.'s 1994 release, Monster, was a return to a more rock-oriented sound. The band began its first tour in six years to support the album; the tour was marred by medical emergencies suffered by three band members. In 1996, R.E.M. re-signed with Warner Bros. for a reported US $80 million, at the time the most expensive recording contract in history. The following year, Bill Berry left the band, while Buck, Mills, and Stipe continued the group as a trio. Through some changes in musical style, the band continued its career into the next decade with mixed critical and commercial success. In 2007, the band was inducted into the Rock and Roll Hall of Fame. R.E.M. disbanded in September 2011, announcing the split on its website.
. 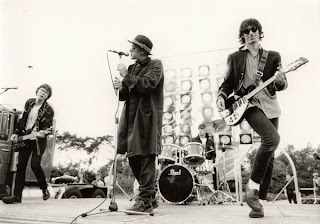 Here is a real gem for fans of REM . There are two concerts taken from the radio, the main one being fully acoustic. Best of all is that it includes issues of very early REM recordings. For a small time in the mid-90s in Australia, a legal loophole allowed these 'Unauthorised Recordings' to be widely available (usually on the 'Banana' label). They were usually re-releases of previously hard-to-find boots. So no doubt some of you have this title under a different name and possibly a less edited version.
The post consists of MP3 (320kps) ripped from a very 'appealing' Banana bootleg release and includes full album artwork.
This is a very cute, loose REM radio session with the boys in a playful mood. Quite a few oddities and snippets such as Spooky, Tusk and Jackson make this a compelling listen. The last 2 tracks are tacked on at the end and are from a completely different recording session. This 2nd version of  "Losing My Religion" is more like their original hit single recording and "Shiny Happy People" is a bit of a filler.

Track Listing
01. World Leader Pretend
02. Half a World Away 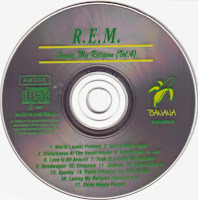