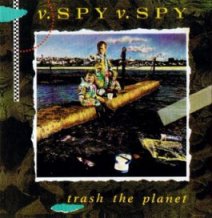 Spy vs Spy, also known as v. Spy v. Spy, The Drug Grannies and The Spies, are an Australian ska/pub rock band from Sydney formed in 1981.They became known for tackling political issues through their music, including racism, homelessness and contemporary drug culture. They were named after a comic strip, "Spy vs. Spy" in the US Mad magazine.
The band's initial line-up was the trio of Craig Bloxom on bass guitar/lead vocals, Cliff Grigg on drums / percussion and Mike Weiley on lead guitar/vocals. Spy vs Spy's early music was ska-influenced indie rock, exemplified by their debut single "Do What You Say" on the independent Green label in April 1982.
They released an EP Four Fresh Lemons in August. Their music became more straight forward hard rock for their pub audiences. The band broke up in early 1983 only to reform mid-year, by which time they were using the name v. Spy v. Spy to avoid legal problems with Mad magazine. They were eventually signed to Midnight Oil's label Powderworks and managed by Oils manager, Gary Morris. 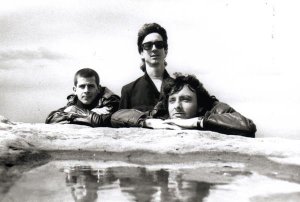 Their first full-length album Harry's Reasons was released in March 1986 and produced by Leszek Karski. They switched labels to WEA and had their highest charting success in February 1987 with their single "Don't Tear It Down" on the Australian singles chart and the associated album A.O. Mod. TV. Vers. peaked at #12 on the Australian albums chart.
Spy vs Spy's follow-up album, Xenophobia (Why?) was released in March 1988 peaked at #15 in Australia. It was produced by Karski and Guy Gray and released by WEA in 14 countries. Their 1989 album 'Trash the Planet' peaked at #22 on the ARIA Charts and stayed in the charts for 6 weeks. None of their subsequent releases reached the Australian Top 40. The band split and reformed a number of times but still developed a strong following in Brazil [ extract from http://www.vspy-vspy.com/]
.

.
Trash The Planet
Trash the Planet was recorded at the Manor studios in Oxfordshire UK with Craig Leon producing. It was the hottest summer in English history and I got viciously bitten by "Bowser", one of Richard Branson’s Irish Wolfhounds while doing the mix-down. I couldn’t walk for 3 weeks after that, because the huge hound of hell took a chunk out of my leg the size of a small volkswagen. I still walk with a limp and have a fear of small puppies. We spent more money on this album than any other and lived the life of rock stars by the pool out the back of the Manor while we worked on the album. Our manager at the time (he fleeced us, big time) brought his wife & child and enjoyed our money while it lasted. We grossed $960,000 from live shows in 1989 and where did all the money go? Up in smoke, thanks to management by sharks, the timeless story of rock bands the world over. Oh, by the way we spent two thousand English pounds on alcohol while making Trash the Planet. Well done boys! [comments by Craig Bloxom]
.

.
This post consists of FLACs and MP3 rip from CD (320kps) and includes full album artwork for both LP and CD. I've also included as a bonus track, a live recording "Hardtimes" which was recorded for a TripleM radio broadcast in Brisbane in the early nineties.
Although not the Spies best album, this album is still a valuable item for any Aussie record collection and copies of this album fetch decent $$ on eBay. I'm keeping mine - that's for sure
. 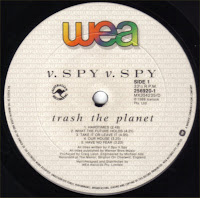