Genesis are an English rock band that formed in 1967. The band currently consists of its three longest-tenured members - Tony Banks (keyboards) and Mike Rutherford (bass, guitar), who were founder members; and Phil Collins (vocals, drums), who first joined in 1970. Past members Peter Gabriel (vocals, flute), Steve Hackett (guitar) and Anthony Phillips (guitar), also played major roles in the band in its early years. Genesis are among the top 30 highest-selling recording artists of all time, with approximately 150 million albums sold worldwide.
In 1968, they signed to Decca and, with help from producer Jonathan King, they recorded their first two singles, and the album 'From Genesis to Revelations' (Chris Stewart had been replaced on drums by John Silver) but were generally unsuccessful.

In 1970, the band came to the attention of Charisma, and with producer John Anthony they began to work on 'Trespass', a cult success. After having replaced Phillips and Mayhew with Phil Collins and Steve Hackett, the classic Genesis line-up was in place, and the band went on their now legendary 1971 tour, a colourful line-up of strange performances.
It was with 'Foxtrot', however, that Genesis scored their first major critical success, followed by 'Selling England by the Pound' in 1973. It soon made number three in the UK charts, gave the band a reputation in America, and also provided their first UK hit-single.
A year later, Genesis (now big-time rock superstars) released the concept double album 'The Lamb Lies Down on Broadway'. This album was also the last one to be made by the 'original' Genesis line-up.
In May 1975, Peter Gabriel announced his departure, and, almost two years later, Steve Hackett also left to embark upon a solo career. 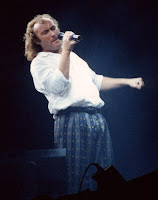 In 1978, Collins, Banks and Rutherford moved from their prog-rock origins towards a light rock sound of the type that would dominate the worldwide charts in the 1980s. This resulted in their first top 40 single in the US with "Follow You Follow Me", their first number one album in the United Kingdom, Duke, and their only number one single in the United States, "Invisible Touch".
But when, in March 1996, Phil Collins suddenly announced that he had left the band, the Genesis-era finally ended.
.
Judging by the track listing on this live release, these recordings were  made while the band toured during the  'Invisible Touch' tour (1986-87). Further investigation has brought me to the conclusion that these recordings may have come from 'The Entertainment Centre in Sydney, Dec 19, 1986'. This is particular likely as the MOJO bootleg label is Australian and most of the concerts selected for release by this Bootleg label originated in Australia.
.

The Invisible Touch Tour: September 1986 – July 1987
With the enormous success of the Invisible Touch album, Genesis embarked on one of the largest tours of their career, playing in North America, New Zealand, Australia, Europe, Japan, and culminated in 4 nights at Wembley Stadium in the UK, capping one of the most successful tours in the history of Genesis, and documented on the Live at Wembley DVD.
For the full listing of Invisible Touch Tour Dates - see suppers-by-the-sea website
. 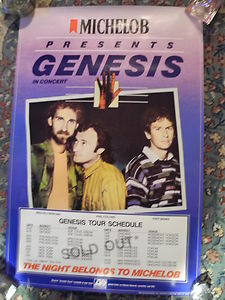 Since the completition of the Mama tour in February 1984, Phil, Mike and Tony had gone their separate ways with various solo projects. Inevitably, press reports suggested the split of the band following Phil's solo success and continued session and production work. However the fans need not have worried as studio work began in the autumn of 1985, with premiers of the new material first on the B.B.C. TV's Old Grey Whistle Test programme on 17.12.85. As well as the first single "Invisible Touch", parts of another track were played under the title of Monkey Zulu, subsequently being titled "Tonight, Tonight, Tonight".
Undoubtly the most commercial album to date Invisible Touch produced an incredible 5 singles, which all charted in North America although not reaching similar success in Europe. Assisted by the video promos by Jim Yukich's team, the band's popularity in the states reached an all time high, and inevitably the subsequent tour was scheduled to begin in the USA in September 1986. There were various attempts to take the tour further around the world than previously, with suggestions of concerts in communist China and the USSR. In the event however these plans failed to materialize, but Genesis did at last achieve the long promised trip to Australia and New Zealand, and in addition made the trip across the crumbling iron curtain to Hungary.
. 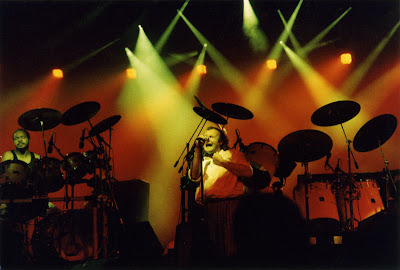 .
Tour rehearsels took place in Dallas and several reports credit rehearsels of old favourites like "Carpet Crawlers" which unfortunatelly never made the tour set. Apparently the non album track "Do The Neurotic" was rehearsed as a possible set closing number but eventually the old favourite Los Endos was retained. Backed by the refined light show, the tour began as scheduled in Detroit under the official title Invisible Tour. Due to huge ticket demand, only stadiums and outdoor arenas were considered, and this as well as mixed feelings over some of the shorter singles from the latest album continued the errosion of some of the bands older fan base, being more than replaced, in numbers at least, by many new fans. At least the introduction of near perfect video sreens assisted the view at some of the larger venues. As well as live prospects of the band on stage, the video promos were played on these screens with the Benny Hill appearance on Anything She Does greeting the audience prior to the opening number of the set.

In a radio interview, towards the end of the tour, Mike Rutherford gave the total of shows played as 112 in 59 cities, frequently with 3-4 concerts per town.

With such a tightly organized schedule it was perhaps inevitable that the set should remain largly standardized. Three variations were played, as follows:

North America, September - October:
Mama, Abacab, Land Of Confusion, That's All, Domino, In To Deep, The Brazilian, Follow You Follow Me, Tonight Tonight Tonight, Home By The Sea/ Second Home By The Sea, Throwing It All Away, medley: In The Cage/ In That Quiet Earth/ Apocalypse in 9/8/ As Sure As Eggs Is Eggs, Invisible Touch, Los Endos, Turn It On Again-medley

Australia / New Zealand, November - December :
Mama, Abacab, Domino, Your Own Special Way, In Too Deep, The Brazilian, That's All, Home By The Sea/ Second Home By The Sea, Throwing It All Away, medley: In The Cage/ In That Quiet Earth/ Apocalypse in 9/8/ As Sure As Eggs Is Eggs, Invisible Touch, Los Endos, Turn It On Again-medley

Remainder of tour:
Mama, Abacab, Domino, That's All, The Brazilian, medley: In The Cage/ In That Quiet Earth/ Afterglow, Land Of Confusion, Tonight Tonight Tonight, Throwing It All Away, Home By The Sea/ Second Home By The Sea, Invisible Touch, Los Endos, Turn It On Again-medley
.
During the Australian tour the medley changed with the return of In That Quiet Earth and Afterglow in the place of Unquiet Slumbers and Supper's Ready sections, which provides even more evidence to support the source of this MOJO bootleg recording as Australian (Sydney). 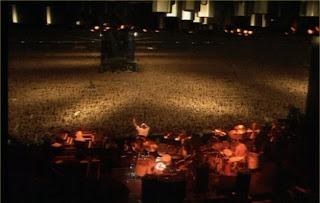 Other set changes were fairly minor. Due to fighting in the crowd at Rotterdam, the "Turn It On Again" medley was cut short for safety reasons. The main alternation was the occasional obmission of "Tonight Tonight Tonight", particulary at indoor stadium gigs, due to problems with Phil?s voice caused mainly by the amount of smoke build up from the audience. These problems would return during the next tour in 1992 as we shall see later. Close examination shows that in some of these problem venues, slight variations were made in other numbers of the set to assist in high note sections.
Of particular note in the Australian tour dates was the return of "Your Own Special Way" for the first time since 1977. Australian regulations apparently insist on involvement of local musicians in all live concerts and an eight piece string section was therefore added for this track and In Too Deep. Apparently the same musicians had assisted Phil's solo band during his 1985/86 tour dates which no doubt resulted in their selection here.
Other sections of the sets were subject to slight changes. Phil's audience participation time before "Home By The Sea" was retained, but with the climax amended to the levitation of the arena during the contact with the other world. Audience participation was also sought during the introduction to "Domino", and the closing introductions of the "Turn It On Again"  medley. The composition of this medley also standardized after the 1983/84 tour experimentations.
. 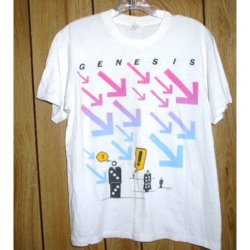 In retrospect therefore, what were the most memorable moments of the tour? Working screens and expertly handled lightning compensated the problems of massive venues to a great extent, and the official tour video and Visible Touch promo documentary gave a good moment of the tour itself (both have been combined on one release on the DVD Live At Wembley Stadium in 2003, which is also part of the Movie Box, released in 2009). The reduction of classic tracks in the set caused some illfeeling amongst older fans and in retrospect it might have been better to remain the original medley for the European dates. Overall however the tour was a complete success, for both old and new fans.

Unusually, Genesis re-formed twice for single events over the next three years, and as the make up for the sets were obviously influenced by the Invisible Touch tour sets it is worth mentioning them here.
Firstly, the band appeared at the Atlantic Records birthday party at Madison Square Gardens on 14th May 1988. A condensed set included portions of solo members material: Turn It On Again, That's All, Tonight Tonight Tonight, Land Of Confusion, Mama, Invisible Touch, All I Need Is A Miracle, You Can't Hurry Love, Shortcut To Somewhere, Turn It On Again - reprise
Finally the band regrouped at Knebworth on 30th June 1990 for a charity concert and played Mama, Throwing It All Away and the Turn It On Again-medley together with Phil?s solo band which had played an earlier set [extract from www-genesis.com]
.

This post consists of an MP3 rip (320kps) taken from CD and includes album artwork for the MOJO release and alternative artwork for the Live at The Sydney Entertainment Centre title (see below).  The quality of the recording is excellent and would give it a 9 out of 10 rating.
The track listing on the MOJO is incorrect however, and so I have also include an edited version of this generic cover with the correct listing (see tracks 4, 6 & 7). All photos from the above article have also been included for your reference.
One bit of trivia I read recently (quite by accident) is that the term 'Invisible Touch' is another name for Cocaine, so listen to this bootleg in moderation please!
. 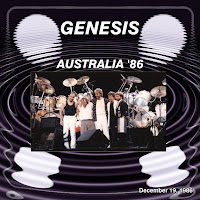