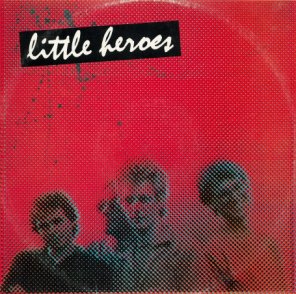 Little Heroes were a popular Australian rock band in the 1980s. They are best known for their hit single "One Perfect Day", which was released in 1982.
Melbourne band 'Little Heroes' evolved out of Carlton pub-rock band Secret Police which occupied Roger Hart, John Taylor and Bruce Pumpa during 1978 and 1979. The line-up was completed by Andrew Callender (guitar, vocals), Peter Linley (sax) and original bass player Neil Walker. Prior to Secret Police, Hart played in The Cruisers which comprised Shane Day (vocals), Chris Dyson (guitar), Frank Savage (guitar), Derek McCathie (bass) and John Lloyd (drums). Secret Police did not issue any records, although posthumously the band contributed the tracks "Emotion" and "Everybody Looks Lonely at Night" to Missing Links' 1981 Various Artists album The Melbourne Club. The Little Heroes came second in the Victorian heat of the 1980 Battle of the Sounds, and then took out first place in the national final with prize money of $5000. The band issued its debut independent single "She Says"/"Coming Home" in November 1980. 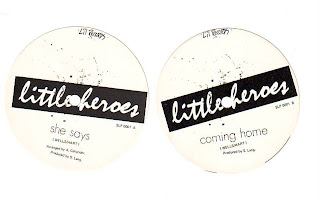 Huk (Foote) Treloar (ex-Bleeding Hearts, High Rise Bombers, Living Legends, Sneakers) replaced Bruce Pumpa and the band issued the featured album  'Little Heroes' (August 1981). The album produced three singles, "For a Bleeding Heart"/"She Says" (March 1981), "Last Number One"/"Catch Me" (June) and "India was Calling Me"/"Pretty Shadow" (September). At the end of 1981, Alan 'Clutch' Robertson replaced Treloar on drums. The new line-up issued the 'Play by Numbers' album (August 1982) which peaked at #25 on the national chart during September. The album yielded the band's only national Top 20 hit single, "One Perfect Day"/"Just Can't Wait" (#12 nationally and #6 in Melbourne during May 1982). Two further singles were lifted from the album, "Young Hearts"/"Please Don't Wear that Hat" (#35 in September) and "Saturday (Afternoon) Inside"/"To Be Her Cat" (October).
. 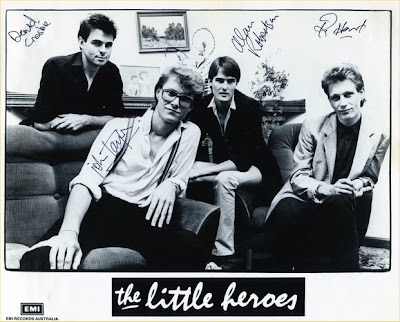 By that stage, Martin Fisher (ex-Breakers) had replaced Crosbie on keyboards, and Peter Leslie had replaced Taylor on bass. At the end of 1982, Fisher and Leslie both left to join Dear Enemy, and Paul Brickhill (keyboards; ex-MEO-245) and Rick Loroit (bass; ex-Inserts) came in as replacements. Anthony Tavasz (ex-Modesty) replaced Loroit after four weeks. Paul Bell also joined on guitar to allow Hart more freedom as lead vocalist. Through all the changes, the band travelled to the UK to record its third album with producer Rupert Hine. The polished Watch the World album (September 1983) included three singles, "Watch the World"/ "Whose Turn to Cry?" (August), "Bon Voyage"/"Let It Go" (November) and "Modern Times"/"Painting Pictures" (March 1984). Watch the World reached #24 on the national chart in October, but by June 1984 The Little Heroes had called it a day. [extract from Encyclopedia of Australian Rock and Pop / Ian McFarlane 1999].
. 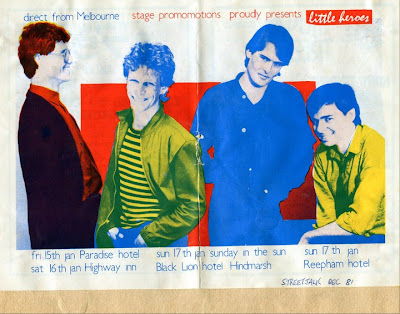 Little Heroes: On The Brink
(Article from Countdown Magazine, Vol 1, No.5, November 1982)

Like most bands that seem to emerge from nowhere, Little Heroes are far from a new1 outfit. The group first came together in 1979 as Secret Police and managed to top the 3RRR-FM chart in Melbourne with a self-financed single "She Says / Comin' Home". A year later they became Little Heroes and walked off with the 1980 National Battle of the Sounds grand final. This led to a recording deal with Giant Records and a debut album which was not viewed terribly fondly by either the band or the public. 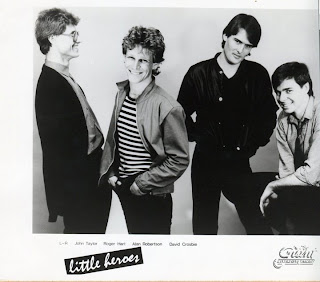 It was not until mid-1982 that they were able to break through the radio barrier and establish themselves as a major act.
The key was the truly fascinating single 'One Perfect Day', which seemed to impress an enormously wide span of people, from head-banger to synthesizer junkies. It emphasised Little Heroes unique scope of appeal, which enables their musis to be played on ethnic, community and ABC radio, as much as it is on the rock airwaves.
The creative nucleus of Little Heroes is 27 year old lead vocalist/lead guitarist/song-writer Roger Hart, a much-travelled lad from an art school background who paints professionally under the name Roger Wells. Roger was working as a tram conductor in the mid-seventies when he formed a group called 'The Cruisers' with Flowers drummer John Lloyd and Dots guitarist Chris Dyson. At the same time he earned a BA in Philosophy at Melbourne University and a Diploma of Education at Melbourne State College.Little Heroes have undergone some severe line-up changes since inception. In fact Roger is the only member remaining from the original unit. It is his attitudes, influences and style which permeate the music of Little Heroes. His lyrics invoke a unique mood, as evidenced by the band's second, and infinitely superior, album 'Play By Numbers'. This LP features the current lineup of: (as seen left to right) Alan 'Clutch' Robertson (drums), Peter Leslie (bass), Roger, and Martin Fisher (keyboards). Martin was formerly members of The Breakers. 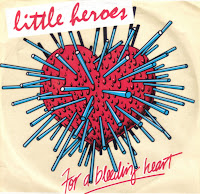 Roger found the switch from art to music a little puzzling and is still trying to come to grips with critics and reviewers who fail to grasp his intent. When I did my art, I never worked with other people" he explains. I could close myself away and do whatever I wanted and no-one could criticise me because it was my art and nobody else's opinion counted. But then I started playing in a band and all of a sudden people were saying "Hey, you get a terrible guitar sound" or whatever. It's different from art, so different".
Gradually Roger is assimilating himself into the ruthless world of rock and learning the rules for success, But it will always be very much on his terms. The originality of his songs sparkle - intricate and obscure gems like "India Was Calling Me", "Melbourne's Just Not New York", "Dusseldorf" and, of course, "One Perfect Day".
Littte Heroes are on the brink of enormous success, with strong international interest already apparent.  Their future certainly bears watching.... 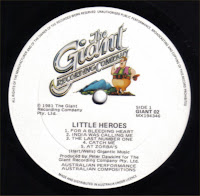 This will be my last post for 2012 and I hope you enjoy this Aussie rarity. The post consists of  freshly ripped MP3's (320kps) taken from a recently acquired LP, found sitting in a Bazar in Geelong West.  Full album artwork is included for LP, including lyric sheet and band member photos. I have also included as a bonus their Independent Single release "She Says" / "Coming Home" which are considerably different to the later recordings on their debut album (thanks to ecrob at Midoztouch for this indie release).
I hope to see you back in the new year and remember, if it wasn't released on vinyl then you won't find it here.... 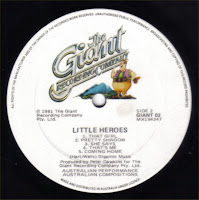