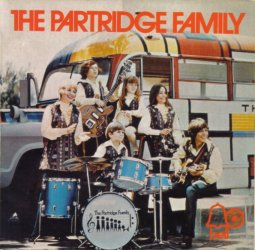 In 1970, the Partridge Family was among the top-selling recording acts, not to mention one of the top-rated TV shows of its time. Either way, it made David Cassidy a successful teen idol until the show's cancellation in 1974. The Partridge Family consisted of Shirley Partridge (keyboards, vocals) and her five kids: Keith (lead vocalist and guitar), Laurie (keyboards, vocals), Danny (bass guitar, vocals), Chris (drums), and Tracy (tambourine). Rounding out the cast was their on screen manager, Reuben Kincaid.
With the exception of Shirley Jones and David Cassidy, none of the actors on the show actually sang or played on the group's records. In fact this was done by professional studio musicians and singers, with the family lip-synching to the tracks on camera. In fact, David Cassidy was originally hired for his looks, but when the producers found out that he could sing they realized that they could use him in the real band. 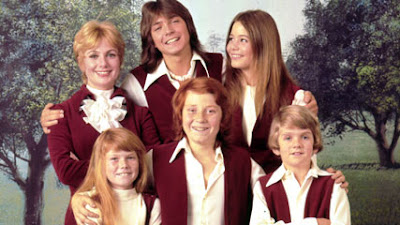 Many of the episode plots draw upon the comedic relationship between Reuben (Dave Madden) and Danny (Danny Bonaduce). These two were good friends both on and off the set. Other plot devices were Keith's good looks and popularity at school, Laurie's 70's style activism and some of the strange encounters that the family had when on the road in their bus.
The Partridge Family was true wholesome family programming. At the time Shirley Partridge was one of the the first single mother's to be featured on a television show. Originally the scripts called for her to be divorced, but this was changed to describe her as a widow.And of course, unlike other shows on TV at that point, "The Partridge Family" was a built-in hit machine fueled by the good looks and bubble gum charm of Cassidy. 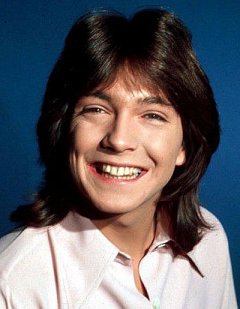 The "group's" first No. 1 hit single, "I Think I Love You," was released to coincide with the debut of the show. Only Cassidy and Jones sang on the song and were backed by several famed studio musicians including Hal Blaine and Louis Shelton.
On Aug. 31, 1974, the curtain came down on "The Partridge Family."
In 2010, Cassidy, whose poster image was pinned up in thousands of teenage girls' bedrooms in the 1970s, toured in concert in America and worldwide -- and was a guest on the Oprah show in the same year.
.
OK - I'll admit that I was a big fan of the Patridge Family back in the early 70's when it aired on Australian T.V, but more because of the cheeky antics that Danny got up to each week, especially while teasing  manager 'Reuben Kincaid'.  The Patridge Family's music was catchy and I, like so many other young teenagers at that time enjoyed their big hit "I Think I Love You".
Needless to say, the show was Korny but at the time it was accepted and like the Monkees or the Banana Splits, T.V shows mixing music, comedy and sitcom were popular. If you don't agree with the Korny label for this WOCK posting, then the K can stand for Reuben Kincaid instead.
The Post is a 320kps MP3 rip from my 7" Vinyl EP which I've owned all these years and includes artwork and label scans. Condition of the vinyl is fairly good considering it is over 40 years old !

Oh, and if there are any enterprising producers out there reading this month's WOCK on vinyl, thinking about trying to make a "Partridge Family" reunion happen, take note that you'll need to go through their longtime manager, Reuben Kincaid first.
.
Side A
01 - I Think I Love You
02 - Doesn't Somebody Want To be Wanted
Side B
03 - I'll Meet You Halfway
04 - I Woke Up In Love This Morning
.
The Patridge Family Link (30Mb) Link Fixed 27/02/2015
.
Posted by AussieRock at 11:12 PM