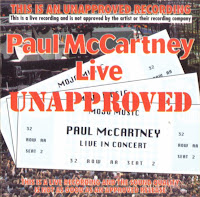 After the Beatles disbanded in 1970, all four launched solo careers. George, after tremendous initial success, gradually retired from the scene, as did Ringo who concentrated first upon a film career, then took life easy, content to be a jet-set celebrity. John, living in the USA, had an uneven solo career before leaving the music business to become a house-husband; he had just released a comeback album, Double Fantasy, when he was murdered. Paul, however, remained in the public eye. He fulfilled his ambition to go back on the road by forming Wings and playing surprise gigs at university dances. Before long Wings grew into a fully-fledged rock band of the seventies variety, undertaking enormous stadium tours of the United States, selling millions of records and ensuring that a new generation of fans grew up who would know Paul more as a former member of Wings than of the Beatles.
Throughout the seventies and eighties, Paul released dozen of albums, first of all with Wings, then as solo projects. After John's death he stopped touring, and spent thirteen years off the road, though the hit records kept coming. In the nineties he did two more world tours, once again breaking attendance records, and this time playing many of the songs he wrote for the Beatles. Interest in Beatles still remained high, and with the release of the three Anthology double-CDs of out-takes and unreleased songs, the group once again shot to number one on the charts, twenty-five years after disbanding. A television documentary series was screened all over the world and released as a boxed set of eight videos. It was if the Beatles had never been away: the magazines and newspapers were filled with interviews with the surviving members and the instantly recognisable faces of their youth flickered across television screen once more. They had become a British institution. [extract from Paul McCartney: Many Years From Now by Barry Miles, Published by Seeker and Warburg, 1997 - p599-600]
. 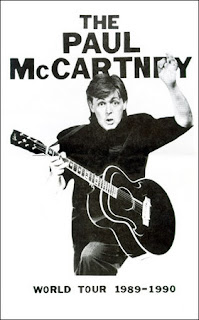 Based on the track listing of this bootleg, I am fairly certain that this recording came from "The Paul McCartney World Tour" which started 26 September 1989 and finished on 29 July 1990. In total, McCartney played 104 shows.
The Paul McCartney World Tour was his first major tour outing in ten years, since Wings UK Tour 1979, and his first appearances in North America in thirteen years, since the 1976 Wings Over America Tour. It was also his first tour under his solo name.
While the tour coincided with the release of his 'Flowers in the Dirt' album, it was thematically more about him finally embracing his Beatles past, including for the first time, in any of his tours, a substantial number of Beatles songs in the set list.
The tour was documented by the 1990 live albums 'Tripping the Live Fantastic',  'Tripping the Live Fantastic: Highlights!', and the 1991 film 'Get Back'. The album 'Tripping The Live' fantastic entered the Music Week Top 75 on 17 November 1990 and peaked at number 17, leaving the charts after eleven weeks. It peaked at #10  on the NME chart. A one-hour tour documentary was also aired on Channel 4 TV in the UK, called "From Rio to Liverpool" [extract from wikipedia]
.

.
The 1989 Paul McCartney World Tour was the first time Paul had played the US since Wings Over America in 1976. He took the road with a new band; Paul Wix Wickens (on keyboards and piano) Robbie McIntosh (guitar, once of the Pretenders) Hamish Stewart (guitar, formerly of the Average White Band) Chris Whitten on drums and of course Linda McCartney (keyboards) whom Paul would always introduce as Gertrude Higgins. The 1989/1990 Tour had 104 Tour dates, 45 in the United States, 6 in the New York area. A free 98 page Tour booklet was given out at each show with profiles of the band, Paul’s career & Tour stats. 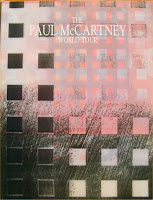 Paul sported long hair and wasn't afraid to play Beatles songs, like in his Wings days. The Tour began in September in Norway, after rolling through Sweden, Spain, Europe and the Netherlands; it hit Los Angeles on November 23, for five nights. Passing through Chicago and Canada, it arrived in New York at Madison Square Garden for four sold out shows on December 11th, 12th 14th & 15th. The tour resumed after the holidays with 18 shows in England including 12 nights at Wembley arena. The Tour came back to the to the US for large Stadium shows throughout the summer. I attended another Giants Stadium show in July 1990. The Tour ended in Chicago on July 29, 1990.
Paul had just released the Flowers in the Dirt album, that June. It was his best work since 1982s Tug of War, the album went gold but only peaked at #21 on the charts. The single My Brave Face got a lot of rock radio airplay and reached #25 in the US Top 40. George Martin did some work on the album, as did Elvis Costello and David Gilmour.

Other notable songs on the album were Figure of Eight (which usually opened shows on the Tour); Put It There and Rough Ride. The tour was documented by a live double album Tripping the Live Fantastic, and the 1991 film Get Back.
During the Tour Paul had added a John Lennon tribute doing a medley of Strawberry Fields/ Help / Give Peace A Chance. He also did Maybe I’m Amazed and Matchbox at some shows. [extract from centrefieldmaz.com]
. 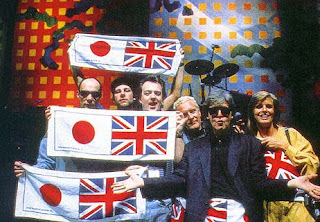 As mentioned, I have not been able to find any other recording that matches this one based on the song listing and order, but suspect this bootleg is simply an extract from one of manyother bootlegs taken from the 1989-90 World Tour. Although the quality of the recording is excellent, I found the atmosphere of the concert to be alittle dull with the McCartney crew simply going through the motions and Paul really not trying to connect with the audience. Nevertheless, the inclusion of many Beatles tunes makes this bootleg special, especially if you haven't heard 'Tripping the Live Fantastic' release.
The post consists of MP3 ripped from CD at 320kps and includes full album artwork, typically sporting the generic MOJO design. 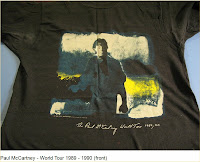 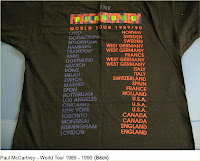