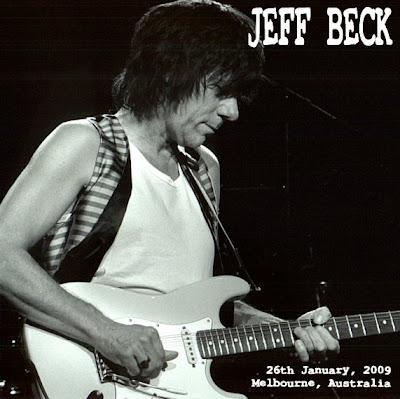 It was 1977, when Jeff Beck made his first and only trip to Australia, 32 long years ago for his legion of fans.
I am one of those fans and can proudly boast that I saw him play (alongside the Jan Hammer Group) when he performed at Festival Hall, Melbourne. I was 18 at the time and was heavily influenced by his 'Blow By Blow' and 'Wired' albums.
Finally, in 2009 guitar legend Jeff Beck returned to Australia for a series of rare and very special performances. Regrettably, I was unable to make the concert, but did managed to acquire a live recording of his concert played at the Palais Theatre in St.Kilda, Melbourne.
According to Guitar World Magazine "Beck and his group turned in rapturous performances on material that covers every portion of the guitarist’s career… Beck’s finger-picking technique, tone and touch have always been astounding, but this bootleg demonstrates that, some 40 years into his career, he is a peerless master of his craft".
Earlier this year in London, 64 year-old Beck was awarded the Blues Artist of the Year Award, and has been nominated for 2009 induction into the Rock and Rock Hall of Fame as a solo artist [http://wots-on.info]
. 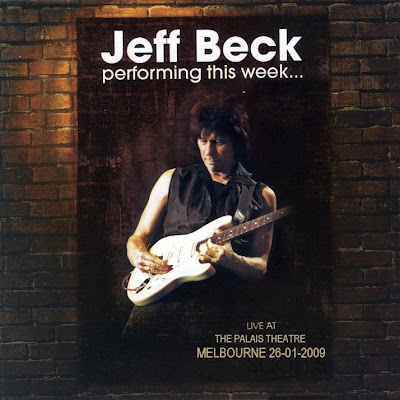 Jeff Beck last toured Australia half a lifetime ago. In 1977, Beck, one of the great electric guitar virtuosos, was a 32-year-old who was spending a year outside Britain to change his tax status. These days, the 64-year-old is happily ensconced in his homeland.
Most of the band that played at Ronnie Scott's will be joining Beck in Australia, most notably Tal Wilkenfeld, the 22-year-old Sydney bass prodigy who has rapidly built an international reputation. "She has the adult phrasing of a mature black funk bass player coming out of a child. It's bizarre," says Beck, who took it as a compliment when Wilkenfeld first started gigging with him and fans assumed she was his daughter.
"I never thought there would be anybody like her, this little figure standing around my kitchen just wanting to play." [
. 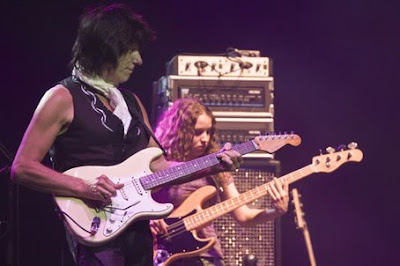 Concert Review:
The night started off with Australian guitar virtuoso Jeff Lang and his bass player, a fine choice of support for Jeff Beck. It’s easy to draw parallels between the two Jeffs, both possessing outstanding guitar technique and, of course, the same first name, but it’s more important than that. Both are songwriters and they use their virtuosity to enhance their songs. This shows through for Jeff Lang on tracks like "The Road is Not Your Only Friend", inspired by banjo players to the point where his guitar sounded like a banjo, and the nice steel lap guitar work on "Some Memories Never Die".
After Jeff (1) departed, Jeff (2) and his group took to the stage, opening with Jeff’s "Bolero" (anyone else sick of seeing the word – œJeff’?), which made for 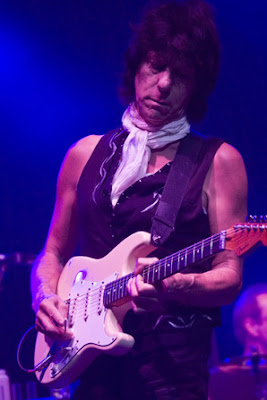 a pretty fine opener. Speaking of Beck, for a guy in his sixties he’s in pretty good shape, but more importantly he plays just as good as ever. Speaking of his playing, it’s just like Eric – œCaptain Boring’ Clapton says; it’s all in his hands. In fact I even saw him continuing a solo while shaking out a cramp in his right hand. But the important difference between Beck and other so-called guitar virtuosos is that Beck knows when to show off and when to play melody, he doesn’t fill every second with a torrent of notes. When he does it’s not to excess, i.e. soloing with his teeth every five minutes. Such as in the cover of Goodbye Porkpie Hat , in which he took a solo with just his left hand, he had this big old happy grin which was just adorable. His band mates have the same mentality as Beck, they’re there mainly to entertain and have fun, not just to show off.
Of special note was bass player Tal Wilkenfeld, acting more like a rhythm guitarist that just a bassist on songs like "Led Boots"; although the drummer and keyboardist were both quite good, with the keyboardist playing a fine solo during "Blue Wind". Speaking of his band mates, he’s clearly enthralled by them; at one point getting down on his knees and faux-worshiping the bassist, and during the final bow out he stepped aside and applauded them. 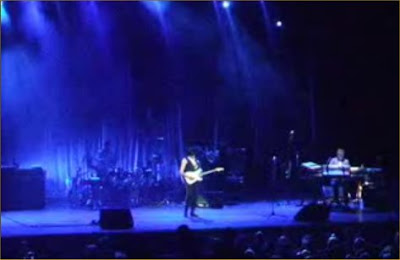 Alas the night had to come to an end, and perhaps as a reference to Neil Young’s choice of ending song at BDO, Beck & Co. also finished with an amazing version of "A Day In The Life". After a standing ovation, and two encores with one song apiece, finally Beck and Co huddled together and took a bow, with Beck thanking the audience (the third time of the night in which he spoke, not that he needs to, he could probably order a cup of coffee using nothing but his guitar and left hand), and departed the stage.
In short and without so much of my verbose Jeff Beck ass-worshiping, he’s still got it.
To see some amateur video footage of the concert, have a look at this website
.
The posting contains mp3's ripped at 320kps and includes full album artwork along with choice photos taken from the concert by Mandy-Pixels (with thanks)
..
Track Listing 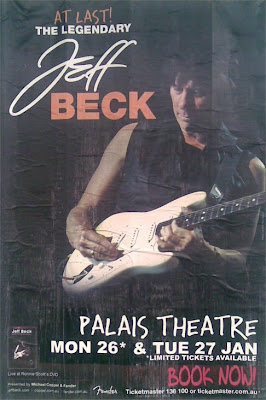