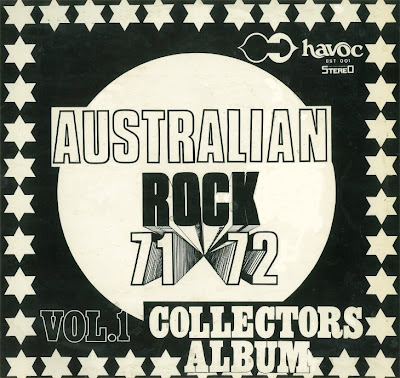 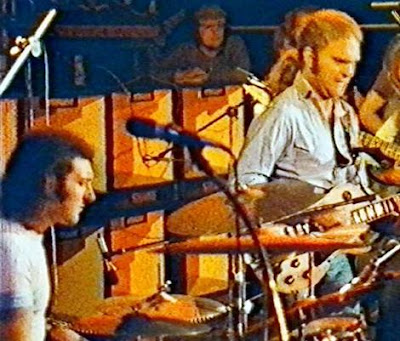 Aztecs Mk IV, 1970-72
Billy Thorpe (guitar, vocals)
Gil "Rathead" Matthews (drums, vocals)
Warren "Pig" Morgan (piano, vocals)
Steve Ninnis (drums)
Paul "Sheepdog" Wheeler (bass)
"The Dawn Song" was released in '71. A moderate hit, it displayed the musical diversity of The Aztecs at this time. There was the view that the band's live power could not be adequately captured on tape, hence studio recordings like "The Dawn Song", which leaned in other directions."Most People I Know (Think That I'm Crazy)" had as much impact in its moment as "She's So Fine", "The Real Thing", "I'll Be Gone" and "Eagle Rock", and it has become a definitive work of Australian rock. It was a huge hit for Thorpie and the new Aztecs, indubitably propelled to the top of charts by the band's triumphant appearance at the legendary 1972 Sunbury Festival.
.
Carson Mk II 1971 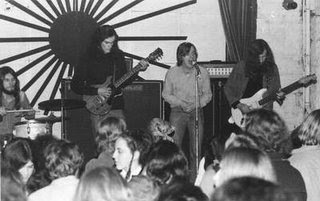 Broderick Smith (Vocals, Harmonica)
Greg "Sleepy" Lawrie (guitar, slide guitar)
Ian "Willy" Winter (guitar)
Tony Lunt (drums)
Barry "Big Goose" Sullivan (Bass)
Carson's career was relatively short -- almost exactly three years - but in that time the "Kings of Boogie" built a reputation as a powerful live act, and they were one of the most popular Australian blues bands of the early 70s. The second lineup recorded a single for the Havoc label, "Travelling South" / "Moonshine", which was issued in August 1971. Driven by its sonorous, dual guitar riff and Sleepy's stinging slide licks, the dynamic A-Side was one of the best Aussie songs of the year. An archetypal 'on the road' song, the lyrics featured Broderick pleading with the semi driver 'to place me up beside your load' to get home to that 'heavy chested woman' waiting just for him to show. It would seem that the lengthy track "Don't Worry" (spelt incorrectly on the overlay sticker) was a precursor to "Better Times Will Come Away" which was released in a shorter form on their Blown Album in 1972.
.
Michael Turner In Session
Michael Turner (guitar, vocals)
Paul Olsen (Drums)
Phil Stone (Guitar)
Bill Sciater (Bass) Album cover credits list incorrectly as Bill 'Slater'
The Michael Turner In Session was a Brisbane based band in the early 70's, renowned for their loud hard rock act, Turner's voice reminiscent of Led Zeppelin's Plant and the their very talented guitar player (Phil Stone)
Considering Michael Turner beat, no less than the mighty Jeff St John (who finished in 2nd place) to take out best male vocalist at the 1972 Hoadley's Battle of The Sounds, it's a crying shame that he was never heard of again, let alone recorded anything else other than his single "Just Around Midnight / Pattern Of My Life"
However, the Michael Turner In Session did performed regularly on GTK-TV and at the 1972 Sunbury Rock Festival.
.
Lobby Loyde (And The Coloured Balls) 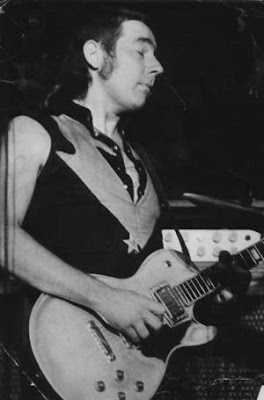 Lobby Loyde (Guitar, Vocals)
See Aztec lineup
Lobby Loyde (who was a distant descendant of Oscar Wilde) is acknowledged as the godfather of heavy rock in Australia. With backing by the Aztecs and issued in August 1972, "Liberate Rock" was the debut record from Lobby's new band Coloured Balls. Although recorded before Loyde formulated the true lineup of Fordham, Miglans and Young, "Liberate Rock" became something of a mission statement for the veteran guitar player. The Aztecs sound is rather distinct, but Loyde leads the charge with his blazing guitar lines and relaxed vocal delivery. "Slowest guitar on Earth" was the flip side of the single and is another of those effortless studio jams that he was so good at creating.
.
Wild Cherries Mk V (1971-72)
Lobby Loyde (guitar)
Teddy Toi (bass)
Johnny Dick (drums)
Lobby resurrected The Wild Cherries' as a three-piece in 1971 with the veteran rhythm section of Teddy Toi and Johnny Dick (both former members of Max Merritt & The Meteors, The Aztces and Fanny Adams) but this endured only long enough to produce a one-off single -- the environmentally-themed guitar tour-de-force "I Am The Sea" (anthologised on Raven's Golden Miles compilation in 1994) -- and to make a short round of touring, including an appearance at the inaugural Sunbury Festival in January 1972. They split In February 1972.
.
Chook
Mick Sampson (Vocals)
Alex O'Hara (Guitar)
Ian Ryan (Bass)
Jeff Lowe (Drums) Album cover credits leave his name off listing
Chook were are short lived Mebourne band in 1971, who played a commercial brand of heavy progressive rock. Their sound was rather primitive when compared with The Aztecs, Chanin and Carson but were still respected by their followers. They only released one single "Cold Feet / Tables Turned" and disbanded soon after. Ryan went on to be the first bass player for Buster Brown in 1973, while O'Hara later played with the Keith Lamb Band (1978) (ex-Hush)
.. 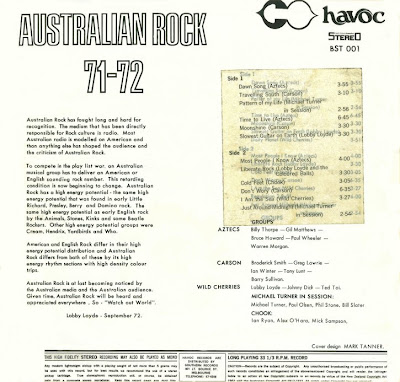 This posting was ripped from my near-mint LP at 320kps and includes full album artwork.
It should be pointed out that the album cover was originally printed with 2 extra tracks listed - "Daily Planet" by Wild Cherries and "Regulation Puff" by The Aztecs, however these were never included due to constraints with track times. Although a sticker with an amended track listing was applied to the cover pre-sale, the original listing can now be seen after 40 years of ageing! This is clearly visible in the scans that I have made (see left)
I hope you enjoy these 2 bonus missing tracks - sourced from HAVOC's recent release "The Complete HAVOC Singles 1971-73", an excellent collection of early 70's Australian Rock / Pop which can still be purchased online
Note: The album cover refers this to be a Vol 1 release but there was never a Vol 2 released to my knowledge, as the record label folded shortly after in May, 1973.
.