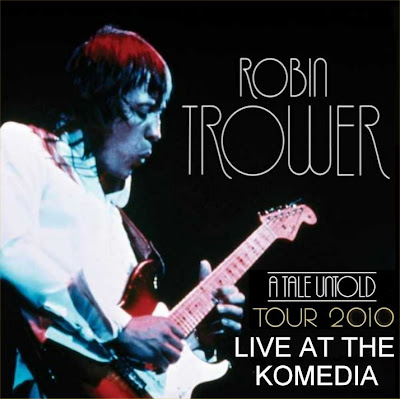 Concert Review (by Alan Howard)
I've attended good concerts and great concerts. My wife, Sylvia, and I, and others who I meet afterwards feel we have witnessed an outstanding one. A compelling performance from beginning to end; a triumph for Robin, Pete, Davey and Glenn (who astound with their energy, passion and musicianship) and for the audience an emotional, unbeatable, roller coaster ride.
I glance at Robin's set list and believe it is one of the strongest Robin has put together for recent tours in the UK. The strong riffs and rhythm of "Confessin' Midnight" followed by "Lady Love" will enable Robin to solo with a degree of aggression and passion right from the start and for the band to hit a tight rhythmic groove early in the show. I'm pleased a deep favourite of mine, "Daydream" is included in the set. The first time on this tour. The gods have fortuitously shone down on me once again. Somehow I feel this is the right place, one of the right gigs to be at. 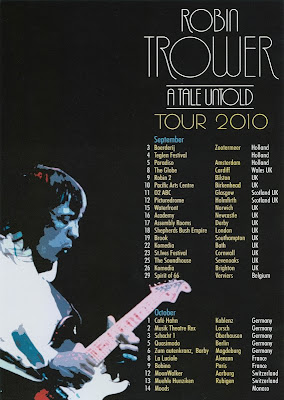 As the number of people flocking into the auditorium grows I feel an increasing air of excitement, anticipation, and a slight electricity of whispering that occurs before such events. Just then Robin and his band appear on stage. The audience give them a warm, boisterous welcome.
"Confessin' Midnight" sounds razor sharp. The band come together and the song goes off like a flashbulb. Robin's guitar tone sounds amazing, especially when he hits the wah-wah pedal. Davey's vocals are superb and distinct tonight. In fact, his singing is a revelation and he wins many plaudits. Robin's soloing bites, twists and turns, and is pleasantly aggressive. A problem with a monitor is soon fixed by Laurie at the end of the song. Without losing ground the band launch into "Lady Love" which keeps the crowd energized. It says something about Robin's unique guitar style that songs from early in his career still retain a freshness and vitality on each hearing. Pete on drums and Glenn on bass combine to provide a sweeping, smoldering, strong rhythm which delights and catches hold of your spirit at the same time. 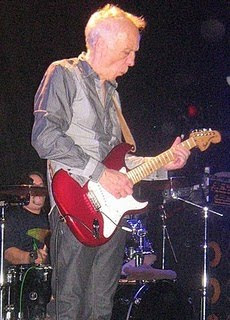 The hypnotic, funky rhythm of "Somebody Calling" is particularly noteworthy powered by Robin's lead guitar work. Combined with Davey's vocals and enthusiastic backing by Pete and Glenn this song sounds better live than I expected. Robin's vibrato is used to killer effect alongside beautiful rhythmic chording and chord changes.
It's obvious that Robin loves to continually write and record new music. The inclusion of three "new" songs in the 14 song set, "Find Me," "The Turning," and " Not Inside - Outside" are well received by the audience. "Find Me" really kicks in when Davey sings in sync with Robin's guitar. During the song Robin plays beautiful understated solos which rise to a crescendo. This should be an interesting composition to listen to on Robin's forthcoming CD as regards guitar parts and overdubs.
"Extermination Blues" has been dropped from tonight's show; a slow song which I believe can lose an audience no matter how great the guitar playing may be. I'm pleased it's been replaced by the classic "Daydream." 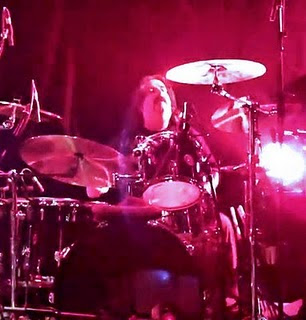 Tonight "Daydream is haunting and unforgettable due to Davey's outstanding vocal and Robin's graceful guitar playing and lush sound. The bass and drums sound just right and combine to make this one of the highlights of the show.
Robin's mastery of the guitar is highlighted to great affect on "Bridge of Sighs". He improvises with great feeling; moving from soulful tenderness to moving aggression. I'm glad this version was captured on film. Another new song, "The Turning" sounds excellent. The main riff, chord sequencing, rhythm - and the slow coda - make this a finely-crafted composition. The haunting beat from the outset creates an intoxicating sound. A truly memorable riff weaves its way through the song and make it impossible to remain still until the coda. A coda which is soft, beautiful, and gets large cheers from the audience. 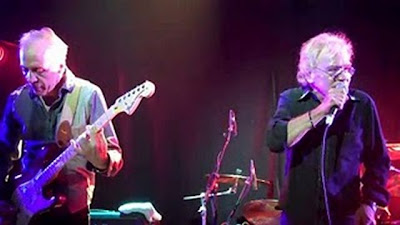 The people I spoke to post-concert agreed this was one of the finest performances by Robin, Davey, Pete and Glenn they had witnessed. A great set list enabled Robin to play his exceptional monster bends, licks, and classic vibrato with incredible energy for the whole concert. At 65 he deserves high praise for continuing to create music and play guitar at a level second to no other living guitarist. Davey's singing was top notch and the sound mix was great for the audience. Pete's heart, soul and finesse shone in his drumming and Glenn's funky bass lines were a revelation. A truly superb performance by Robin and the band which produced many great musical moments to cherish. "Daydream" was the icing on the cake.
.
The post contains a rip of the tape source (32 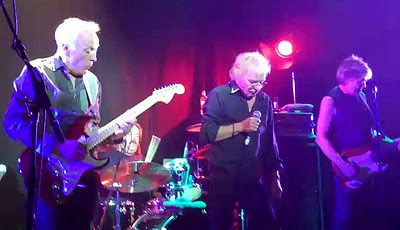 0kps) and includes full album artwork, along with photos taken by Alan Howard on the evening. He even managed to get hold of the 'set list' which the band used on the night (see photo below).
Thanks go to Alan for his excellent account of this first class concert and whoever made the sound recording which is A+ (definitely a soundboard source)
.
Set List
01. Intros
02. Confessin' Midnight 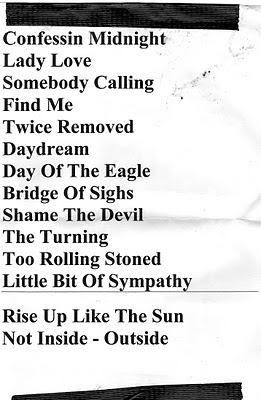