Originally the Alan Price Combo (Burdon joined in 1962), the name The Animals is said to have been used first by local audiences as a reaction to their wild appearance and frenzied stage act.
All Newcastle born and bred, the group built up a solid local reputation before they were signed by the then-unknown Mickie Most and moved to London in 1964. With Most as producer, their first single, "Baby Let Me Take You Home", a reworking of an old blues standard on Bob Dylan's first album, was well-received and a fair-sized hit, but it was their classic version of "House Of The Rising Sun" - also from Dylan's debut album - in summer '64 that really established the group. The song was No. 1 on both sides of the Atlantic.
An uninterrupted sequence of hits followed, with much of The Animals' material being drawn from black R&B sources - e.g. John Lee Hooker's "Boom Boom", Nina Simone's "Don't Let Me Be Misunderstood" and Sam Cooke's "Bring It On Home To Me". The main ingredients of their enormous success were the exceptional power and emotion of Burdon's vocals and Price's inspired arrangements. The lyrics of their original songs were permeated with a gritty working-class realism. With a raw, genuinely distinctive sound, and their uncouth image they went over well in several tours of the U.S. 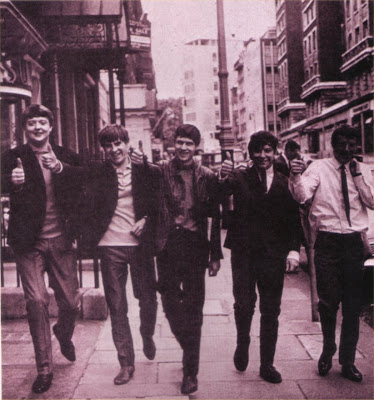 The boys appeared on The Ed Sullivan Show on October 18th 1964. With young girls screaming their lungs out, The Animals took the audience hostage as they played “I’m Crying” followed by their #1 hit “House of the Rising Sun.” The audience got so out of control that Sullivan had to shush them several times, which at the time was quite unheard of.
Pictured Right: The Animals circa 1964, left to right, Chas Chandler, Alan Price, Hilton Valentine, Eric Burdon, John Steel.In 1966 Alan Price, whose views had often clashed with Burdon's, left the group, and the rot set in, although the band signed a new contract with Decca and continued to have more hits, such as "Inside Looking Out", a forceful prison song.
Price had been replaced by Dave Rowberry; Steel also left, and was succeeded by Barry Jenkins from the Nashville Teens, But the centrifugal tendencies inherent in the band finally caused it to fall apart. Chandler and Valentine left,Burdon and Jenkins remained to form Eric Burdon the New Animals. Hilton Valentine made one solo album for Capitol in 1969, All I 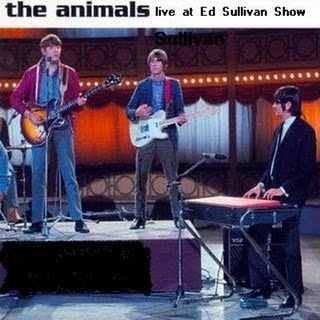 n Your Head, Chas Chandler successfully went into management with Jimi Hendrix, and Steel worked as his assistant.
The original Animals have reformed twice. In 1968 they played a special Christmas gig at City Hall, Newcastle; and at the beginning of 1976 they recorded an album together at Chandler's country residence. [extract from New Musical Express Encyclopedia of Rock 1977]
.
The Most of Animals or The Most of The Animals is the title of a number of different compilation albums by Newcastle upon Tyne blues rock group The Animals. Although track listing varies, all feature only songs from 1964 and 1965. The title is derived from the name of their then producer Mickie Most (see also The Most of Herman's Hermits).
The first album was released in 1966 by Columbia (SX 6035) in mono. Most of the material had not featured on either of their previous two UK LPs. The album charted at #4 - their highest position so far on the UK album chart (both previous LPs having peaked at #6). It was their final album for EMI-owned Columbia before moving to Decca.
The album was also issued on EMI's budget Music for Pleasure label in 1971 (MFP 5218) and Axis label (AXIS 6004) with a different track listing and electronically enhanced for stereo effect. This version also charted, reaching #17. This is the version of the album that has 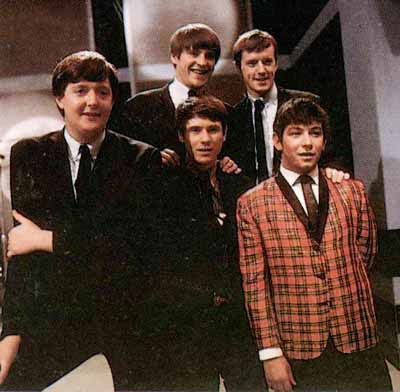 spent the longest in print, being available on LP and cassette throughout the 1970s and 1980s and is still available in extended form on CD. It is also the basis for the 1997 release 'The Best of The Animals' (1997 album) [wikipedia]
.
Because my vinyl copy has seen better days, I have ripped all of the tracks (MP3's / 320kps) from another compilation Animals CD, with the exception of the last track 'Talkin' 'Bout You' (original short version) which was ripped from my album. I have also included the following bonus tracks, because I believe they belong in this 'best of' compilation: "Roadrunner" (one of my all time favourite Animals tracks) and "Inside Looking Out" (another classic covered much later by Grand Funk Railroad).
To top it off, I have also added the extended version of 'Talkin' 'Bout You' which I believe is far superior to the original track released in 1966. As usual, full album artwork is included, along with the covers for the alternative releases made by EMI.
Note: The number 779 is written on the top left corner of the back cover, which leads me to believe that it is copy #779 (Australian Pressing)
.
Track Listing 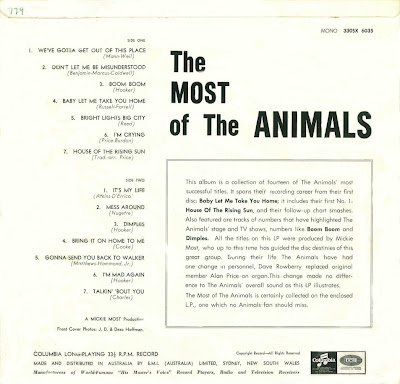