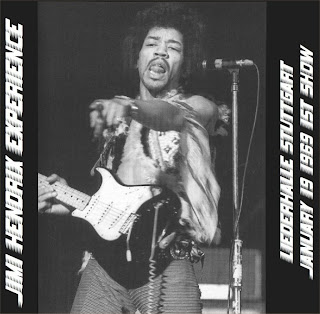 Eire Apparent (a band produced by Hendrix) supported the Jimi Hendrix Experience while touring Germany and France in 1969, between January 11th and 23rd.
During this period they played 11 venues (each with 2 shows) , including Stuttgart.
Now, there was some confusion about the venue that this concert came from. The information provided with the tape recording stated that the concert was taken from the 1st show held at the Liederhalle, Stuttgart on 19th of January, 1969.
However, the track listing doesn't match the listing for the Stuttgart concert, as reported by Tony Brown in his book "The Jimi Hendrix Concert Files", a usually reliable source for Hendrix concert dates published by Omnibus Press in 1999.
'Hey Joe' and 'Voodoo Child (slight return)' are not listed by 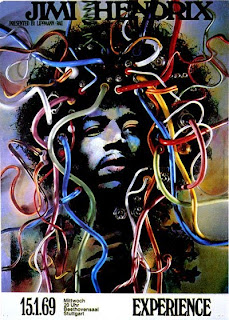 Brown for the first show, but are for the 2nd show. Likewise, the dialogue spoken by Jimi between songs during the first show doesn't match up with that specified by Brown in his book. Now, because Foxy Lady is cut short in this recording, it is possible that some tracks listed by Brown were missed, such as 'Redhouse' and 'Sunshine Of Your Love'.
However, recent information by the original uploader of this concert (Olvator) see Comments has cleared this matter up. It would seem that Brown's concert details are in fact incorrect, and this concert is the Stuttgart Concert held on the 19th of January, 1969.
The recording itself is fairly raw, and I would classify it as a very good audience recording. Nevertheless it is particularly unique in that it is the only Hendrix recording that I know of that includes tracks from his support act, in this case 'Eire Apparent'.
They are given a fairly warm response by the audience (who were primarily there to see the great "Jimi Hendrix") and start with an old Everly Brothers standard 'The Price Of Love' which they manage to stretch out for 13 minutes, showcasing a somewhat average bass solo by Chris Stewart.
. 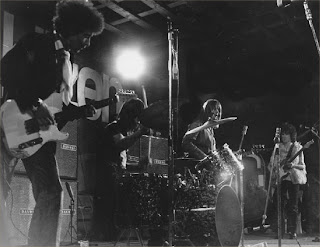 They then break into another cover, Bob Dylan's 'Highway 61' which was popular at that time, but it is evident that Ernie Graham lacks the vocal strength of Dylan. The only original track in their set is a 'Blues' track which has a fast groove but is basically unforgettable. However, they finish off their short 35 min set with another standard 'Gloria' and is worth the wait. Their rendition of this "Them" classic is refreshing, and may have very well inspired Hendrix to do that studio recording of Gloria, which was eventually released in 1979 by Polydor as a 12" single.
Although this is not the greatest live recording of Hendrix from this era, it is the only bootleg which includes his support band's set (Eire Apparent) and is therefore a necessary item for any Hendrix collector.
The rip provided here was taken from tape at 320kps and includes full artwork for each of the concert sets, by 'Eire Apparent' and 'Jimi Hendrix'. [Thanks to Olvator for providing this rip]
Select photos of each band are also included, including a photo provided by blog follower - Perry Quici. Thanks mate.
Note: In May '69, Beat Instrumental reported that Eire Apparent were recording tracks for a new album, but nothing has ever surfaced. However they did do three tracks for a Top Gear session (20/4/69), which included 'Yes I Need Someone', 'Highway 61' and the popular 'Gloria'.
For more details about Eire Apparent, see my earlier posting
.
Track Listing
[Eire Apparent]
01. Intro
02. Price Of Love
03. Highway 61
04. Blues
05. Gloria
[Jimi Hendrix]
06. Intro
07. Come On Pt.1
08. Fire
09. I Don't Live Today
10. Hey Joe
11. Foxy Lady (cut)
12. Star Spangled Banner
13. Purple Haze
14. Voodoo Child
.
Eire Apparent: