(U.S 2004)
.
Before things get too serious at Rock On Vinyl, I thought it might be fun to post a song at the end of each month, that could be considered to be either Weird, Obscure, Crazy or just plain Korny.....
. 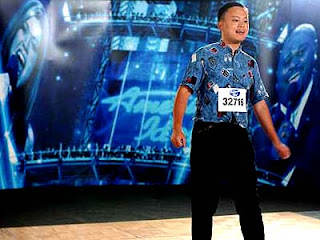 William Hung was an outsider musician who gained fame on the third season of the television series American Idol (2004) as a result of his off-key audition performance of Ricky Martin's hit song "She Bangs". While studying civil engineering at University of California, Berkeley, Hung was inspired to audition for American Idol in San Francisco during September 2003 after winning a talent contest at his dormitory, Clark Kerr Campus.
Hung was not aware that his American Idol audition would be broadcast until it aired four months later. He was the final auditioner on the January 15, 2004, installment, the coup de grâce of an hour-long episode that showcased other would-be pop stars, mostly lacking in talent.
"I want to make music my living," said Hung, before he started singing and dancing to Ricky Martin's "She Bangs". As judges Randy Jackson and Paula Abdul tried to restrain their laughter, judge Simon Cowell dismissed Hung's performance, remarking "You can't sing, you can't dance, so what do you want me to say?", to which Hung replied, "Um, I already gave my best, and I have no regrets at all." Jackson and Abdul applauded his positive attitude, with Abdul remarking, "That's the best attitude yet."
. 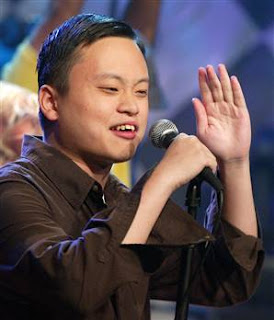 Hung's response to Cowell's criticism starkly contrasts with the often confrontational rejoinders of other contestants. Hung added, "...you know, I have no professional training of singing and dancing," eliciting mock surprise from Cowell, who replied, "No? Well this is the surprise of the century." Hung was not admitted through to the next round.
Hung rapidly gained a cult following. A William Hung fan site, set up by realtor Don Chin and his wife Laura, recorded over four million hits within its first week. He was offered a $25,000 advance on a record deal from Koch Entertainment in 2004, and released three albums on that label in 2004 and 2005. The albums mainly consisted of covers of pop and rock songs, including "She Bangs" [see his website for for details]A false news-story involving the death of American Idol celebrity William Hung was circulated in July of 2004. The story claimed that Mr Hung "was found dead yesterday, apparently of an intentional heroin overdose". The story was passed around via email and generated a lot of discussion among those who frequent online message boards.
. 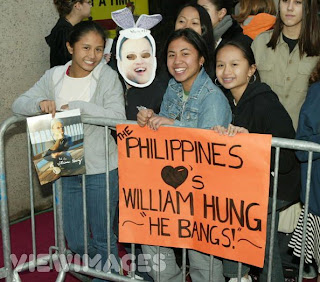 In fact, Mr Hung is still very much alive and well. This rumour started from a story on the satirical "news" site, Broken Newz. Although it resembles a real news story, it was a complete fabrication apparently in the name of entertainment. Personally, I find this sort of satire in very poor taste.
So, overall my verdict is that it doesn't get much 'crazier' than this when a person can claim fame and fortune by having absolutely no talent at all - yet, being in the right place and the right time can can make you a star. On ya William !
For the posting, I put together a package of William Hung "She Bangs" dance remixes found on the web some time ago, along with the original audition video clip from American Idol and some choice photos of his rise to fame. Also included is the English Edit version of She Bangs by Ricky Martin, just in case you need a sedative to put things back in perspective!
.
She Bangs Link (29Mb) New Link 31/10/2015
.
Posted by AussieRock at 9:34 AM