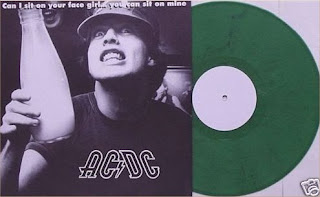 AC/DC are an Australian rock band formed in 1973 by brothers Malcolm and Angus Young. Although the band are commonly classified as hard rock and are considered a pioneer of heavy metal, they have always classified their music as rock and roll.
AC/DC underwent several line-up changes before releasing their first album, High Voltage, in 1975. Membership remained stable until bassist Mark Evans was replaced by Cliff Williams in 1977 for the album 'Powerage'. The band recorded their highly successful album Highway to Hell in 1979.
Lead singer and co-songwriter Bon Scott died on 19 February 1980, after a night of heavy alcohol consumption. The group briefly considered disbanding, but soon ex-Geordie singer Brian Johnson was selected to replace Scott. Later that year, the band released their best-selling album, "Back in Black". And of course the rest is history so I'm not going to bore you with the rest of their biography! 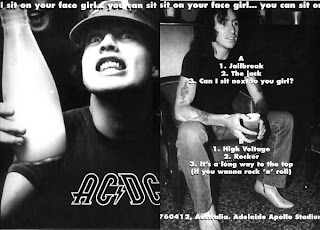 As a teenager, I spent most of my adolescence years listening to AC/DC on the radio and watching them play on the popular TV show 'Countdown'. To me, AC/DC were a band that defined 'Aussie Rock and Roll' and led the way for other bands to make it big overseas.
I have a particular soft spot for early AC/DC recordings, and have chosen this bootleg because it truly defines their 70's sound (and led admirably by their cheeky vocalist Bon Scott).
Now, there appears to be some debate as to whether the bootleg 'Can I Sit On Your Face' was taken from a concert recorded at the Apollo Stadium, in Adelaide in December of 1976, or a later show held in January, 1977 at Haymarket, Sydney.
. 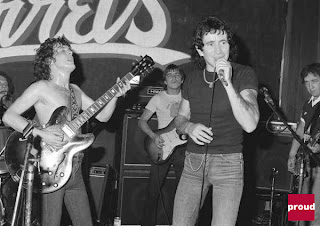 According to AC/DC Bootlegs the song list for this bootleg best fits the order shown for the Apollo Stadium concert held in 1976, with the last two tracks 7) Baby, Please Don't Go and 8) Problem Child missing. This can be explained by the length limitation for Vinyl recordings at the time, where most LP's had a limit of 20 mins per side. Pressings beyond this time limit suffered poor sound quality and volume. For this reason, I suspect the last two tracks were left off this bootleg, to retain quality. The song order for the Haymarket show is also totally different to this bootleg, so I can't see how it could have been taken from this concert as there is great continuity between all tracks on this bootleg.
.

The Apollo Stadium (officially called the Apollo Entertainment Centre) was an indoor arena located at 41 Kingston Avenue, Richmond in the Adelaide Metropolitan Area, South Australia. It had a seating capacity of 3,000. It opened in 1969, and was named as such after the Apollo moon landing of the same year.
. 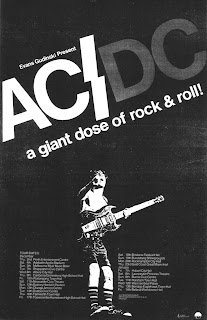 'Can I Sit On Your Face Girl' is one of Bon Scott's most colorful performances, and my current favorite AC\DC bootleg. If you don't have this in your collection, it is a must. What makes this so special, is that the live recordings are not an attempt to make an exact duplicate of the studio version. This concert was just Bon and the boys, talking with the crowd, playing hard, and singing a few fun variations of their popular songs.
The rip included here was taken from 'Green Vinyl' at 196kps and includes album artwork along with choice photos of ACDC from the same era. A recent copy of this album was sold on eBay for £29.99 Not a bad price considering there were only 500 copies pressed. This bootleg also boasts excellent sound quality and I would give it an A+ rating.
.
Track Listing
01 - Jailbreak
02 - The Jack
03 - Can I Sit Next to You Girl
04 - High Voltage
05 - Rocker
06 - It's a Long Way to the Top
.
Band Members:
Bon Scott (Vocals and obscenities)
Angus Young (Guitar)
Malcolm Young (Guitar, Vocals)
Mark Evans (Bass, Vocals)
Phill Rudd (Drums)
.
AC/DC Link (60Mb)
.
Posted by AussieRock at 9:29 PM