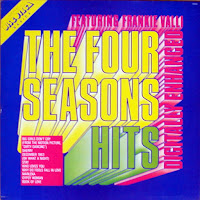 The Four Seasons singing group was formed in 1955 in Newark. New Jersey with lead singer Frankie Valli, brothers Nick and Tommy DeVito, and Hank Majewski. First known as The Vantones. and then The Four Lovers, they finally became The Four Seasons, named for a New Jersey bowling alley! Bob Gaudio (of The Royal Teens) joined the group in 1959 as keyboardist and songwriter, replacing Nick DeVito. Gaudio also became writer/producer in partnership with hit making producer/songwriter Bob Crewe.

The Four Seasons debut release "Sherry" skyrocketed to #1, and the group had their first million seller. The follow-up release, "Big Girls Don't Cry," followed suit and zoomed to #1, and the group had their second gold record for another million seller. Both of those golden hits are spotlighted in this exceptional collection.  For a more extensive account of The Four Seasons biography, see my previous post The 4 Seasons - Gold Vault Of Hits post. 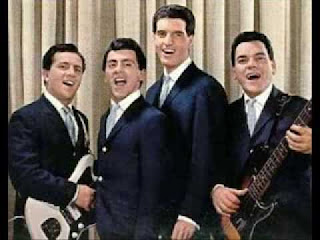 This compilation of The Four Season's successes not only brings you their #1 hit of 1975, "December 1963 (Oh What A Night)" but also the exciting long dance versions of that hit and "Big Girts Don't Cry," along with their hit version of Maunce Williams "Stay," plus "Who Loves You," "Why Do Fools Fall In Love," "Marlenna", "Gypsy Woman," and "Book Of Love."    Truly a must for collectors'.

This post consists of FLACs ripped from my CD release and includes full album artwork for both vinyl and CD, plus label scans.
Like the Bee Gees, The Four Seasons made newly founded fame when Disco came along, and their 1975 hits "December 1963 (Oh What A Night)" and "Who Loves You" were constantly on my turntable as a Teenager.   Ah, the good ol' days when  Mirror Balls and Platform Shoes were common accessories............. 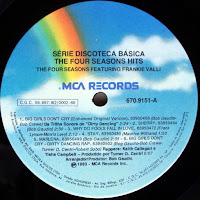