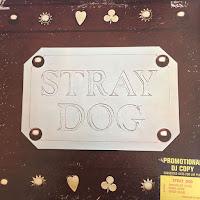 Stray Dog were a blues-based hard rock band formed in Texas in the early 1970s. They recorded three albums before disbanding around 1976. The band originally formed in Texas under the name "Aphrodite". They moved to Denver, Colorado, where they became very popular. They were introduced to Neville Chesters, a former road manager for Emerson, Lake & Palmer, who convinced the band to go to London where, along with a friend and a former Tour Manager Lorenzio Mazzio, he introduced William 'Snuffy' Walden to Greg Lake, who signed them to ELP's label, Manticore Records. Randy Reeder was replaced by Leslie Sampson. Lake produced three tracks on the 1973 debut self-titled album, Stray Dog, with the band producing the remainder.  Sounding like a cross between Leslie West and Jimi Hendrix, Snuffy Walden's guitar licks and lightning fast frett work make this album compelling listening, especially the bonus live tracks. Interesting voice of Alan Roberts (a sort of a lower, mid-pitched Glenn Hughes)
. 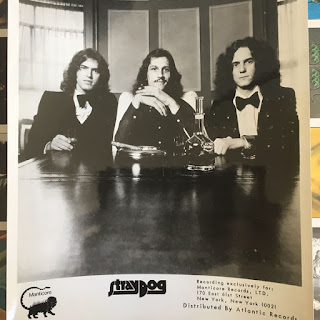 Produced by benefactor Greg Lake and the band, 1973's "Stray Dog" was one of those albums that somehow managed to fall through the cracks.  Critics largely panned it as mindless heavy metal, while fans simply ignored it.  Shame.  True, musically these seven tracks didn't offer up anything particularly original, but the band's affection for conventional blues rock was obvious throughout the collection.  Walden was a spectacular Hendrix-influenced guitarist who managed to pull a unique, watery sound out of his instrument (recall he was picked to replace Paul Kossoff in Free).  There's hardly a song here that doesn't showcase a first-rate Walden lead.   He also had a surprisingly enjoyable voice.  Equally impressive, given they hadn't been playing together more than a couple of months at the time the album was recorded Roberts and Sampson provided watertight backing - Sampson's time with Noel Redding's band Road came through on a couple of tracks - check out his blistering performance on the second half of the opener 'Tramp (How It Is)'. 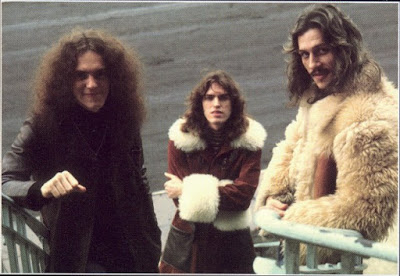 "Stray Dog" track listing:
1. Tramp (How It Is)   (Snuffy Walden - Alan Roberts) - 7:06
'Tramp (How It Is)' opened up with some Keith Emerson-styled church organ and Carl Palmer-ish percussion giving you the impression this was going to be an ELP-styled set of bombastic pretense ...  Luckily about a minute into the track, Walden announced a warning to 'fasten your seat belts' and the song spun off into a nifty slinky blues-rocker.  While Walden's lead work was amazing (the Roberts Sampson rhythm section kicked in big time during the second half of the tune), the big surprise on this one was how good his voice was.

2. Crazy  (Snuffy Walden) - 5:10
Even though it was listed as a Walden original, 'Crazy' was apparently an updated version of Bloodrock's 'Crazy 'Bout You Babe' (taken from the "U.S.A." album).  Regardless of the song's pedigree, the result was a slinky, Hendrix-styled rocker.  Once again, Walden's raspy voice was the big surprise here.  One of my picks for standout performance.

3. A Letter  (Snuffy Walden) - 3:50
Showcasing Walden's acoustic guitar chops, 'A Letter' was a pretty, slightly psych-tinged and slightly wobbly ballad.  They certainly tried their best and the backing vocals were nice, but they just didn't sound all that comfortable on this one. 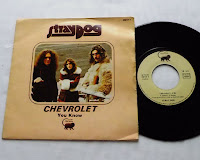 4. Chevrolet   (Billy Gibbons) - 3:56
The band's sizzling cover of ZZ Top's 'Chevrolet' moved things back in the right direction.  You won't forget the original, but overlooking the screechy female backing vocals this one wasn't bad.  Would have been a blast to hear it live ... Curiously a couple of website claim Walden took credit for co-writing this one with Billy Gibbons.  For what it's worth the album credits it solely to Gibbons.
"Cheverolet" was released as an A-Side Single with "You Know" on the B-Side.

6. Slave   (Alan Roberts) - 6:00
Penned by Roberts and showcasing Sampson on drums, 'Slave' found the band taking a somewhat tentative stab at a more progressive sound - imagine early Rush (sans the shrieky Geddy Lee vocals) and you'd have a rough idea of what this one sounded like.  Didn't do much for me at first, but it's consistently grown on me.

7. Rocky Mountain Suite (Bad Road)  (Snuffy Walden) - 8:24
'Rocky Mountain Suite (Bad Road)' started out as an acoustic ballad, but got a lot better a couple of minutes in when it morphed into a country-blues number showcasing some excellent Walden acoustic slide guitar.  The track took another sep in the right direction when it reinvented itself as a jumpy Walden-powered rocker.   For anyone interested, this one showcased Walden's best lead guitar work.
. 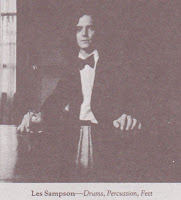 The band hit the road opening for ELP throughout Europe and the US (certainly a weird musical pairing that probably didn't do much to help sales), but as you'd expect, the album did little commercially. I won't go as far as calling it a lost masterpiece, but I will say that this was a pretty amazing debut.   Hard rock with a commercial edge ...  most bands would have killed to have released something nearly as good. [ review by RDTEN1]
.
In March 1973, the British music magazine, NME, reported that Stray Dog were to support ELP on their world tour, which was due to commence in Germany at the end of that month. Stray Dog's follow-up album, While You're Down There (1974), was co-produced by Austin Godsey and the band, which featured new members Tim Dulaine on second guitar and vocals, and keyboardist Luis Cabaza.  The additions of Dulaine and Cabaza radically changed the band's sound from blues-based power trio to a more subdued and commercial AOR rock sound. Much of the material on While You're Down There was written and sung by Dulaine, with founder Walden's contributions being reduced. Only two tracks, "I Would" and the instrumental "Worldwinds", retained a sound and stylistic approach reminiscent of their debut. Sampson had played previously in another power trio, Road, with Noel Redding, and American guitarist Rod Richards. They produced one self-titled 1972 album on the Rare Earth label.

With little promotional support from Manticore which was then distributed by Motown, the band did some local shows in support of the album.  Needless to say the collection vanished without a trace.  Within a couple of months Stray Dog was over.

After the band called it quits Walden joined a reunited Free where he replaced an incapacitated Paul Kossoff.  He also worked with Kossoff in Back Street Crawler.  He was a member of the Eric Burden Band, recorded some solo material and then went on to enjoy considerable success working in film and television - he's scored music for the likes of  "The Wonder Years", "thirtysomething" and "The West Wing". Roberts was briefly a member of Aalon.

This post consists of MP3 (320kps) which I found in cyberspace some time ago and I thought it was time to unleash this Stray Dog and give it a home on this blog.  Full album artwork for both Vinyl and CD formats is included, along with label scans and all photos displayed above.  The live bonus tracks were released with the 2014 CD release where Tracks 8-11 were recorded live at Reading Rehearsals, London 1973 and Tracks 12-13 were recorded live in Rome, Italy 1973.
So folks, crank up the volume on ya amplifier and like Snuffy says in the opening track, 'fasten up your seat belts' cause this album is gonna give you the ride of ya life and rip ya throat out, both at the same time!
.
Track Listing
01. Tramp (How It Is)  (Snuffy Walden, Al Roberts) - 7:04
02. Crazy  (Snuffy Walden) - 5:12 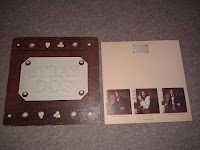 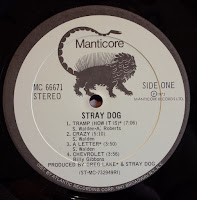 Posted by AussieRock at 9:21 PM