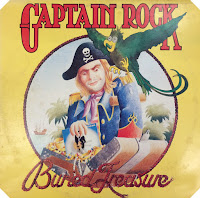 This album is notorious for 3 reasons, actually 4...it's bloody weird! (almost a candidate for a W.O.C.K post), for it's an eclectic mix of folk, rock, country, polka, spoken word comedy, rockabilly, hippie drug themes. It's also likely the lowest selling LP on Mushroom, sank without a trace!
Captain Rock is Bob Brown (not the ex-Greenie leader!), it also includes backing by members of The Skyhooks, Capt Matchbox, Ross Wilson etc and includes the Original version of "Home Among The Gumtrees", the best version in my opinion.  An essential item for any Aussie Music collection! 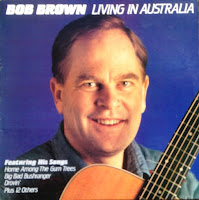 Bob Brown is the co writer and original singer of the famous Australian song "Give Me a Home Among the Gumtrees," who has had many of his humorous songs appear in the ABC Sing music song books. As a school teacher and children's entertainer Bob was aware of the great benefits music, especially singing, plays in the development of young students. In this unique selection of 10 of his songs, Bob provides a teacher friendly interactive white board presentation combining his vocal and musical arrangements, accompanied by easy to read lyrics, a great asset in themselves to any reading program. Bob's songs have long been favourites of primary age children all over Australia. Teachers and students alike will love the songs and the enjoyment and educational experience they bring to the classroom. 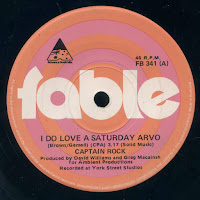 Bob Brown (aka) Captain Rock originally recorded the song on his 'Buried Treasure' album in 1975. It was later recorded by numerous artists, most famously by 'Bullamakanka' and John Williamson. It has since become one of the most recorded Australian songs of all time. Its popularity grew enormously when Don Burke used a cover of the song as the theme to his highly rated National TV program 'Burke's Backyard'.

In 1981, Captain Rock released the single "I Do Love A Saturday Arvo" (Arvo being slang for Afternoon) on the Fable Label but failed to chart in Australia.
.
Give Me A Home Among The Gumtrees
It was originally performed as a satirical number in Johnson and Brown's comedy act at the Flying Trapeze Cafe in Fitzroy, Melbourne and was first recorded in 1975 on the Captain Rock album - Buried Treasure on Mushroom Records. At that time the Australian Government had decided to scrap God Save the Queen as the national anthem and was running a contest called the Australian National Anthem Quest to find a replacement. The Gumtrees song was Johnson and Brown's response (it did not win).

The band's first roadie with the bands nicknamed THE EMU had the cassette tape of capt'rock. and insisted that "Home Among The Gumtrees" was a tune well suited to their sound and from the first night it was performed at the Port O Call Hotel in Coolangatta, it was a hit for the band.

In 1982, the bush band Bullamakanka reputedly found a copy of the Captain Rock album in a music shop sale bin (although this story is not confirmed by all members of the band). They recorded a cover version of Gum trees, which then became a hit.  The song was later recorded by popular Australian country music singer-songwriter John Williamson (singer), thus increasing its popularity with many mistakenly believe Williamson to be the original composer. Bullamakanka made some changes to the lyrics, which were also retained in Williamson's recording. These tended to water down the original tongue-in-cheek nature of the song.

Bullamakanka's version was later used as the theme song for a popular gardening and lifestyle television program called Burke's Backyard, which ran on Australian television for 17 years. The program once held a competition for the best school video version of Home Among the Gumtrees, and thousands of entries were submitted; one of the winners was an Aboriginal community school group who sang the song in their own language. 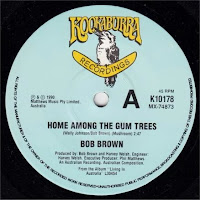 Home Among the Gumtrees has a set of mime actions accompanying the chorus which are familiar to people throughout Australia, although their exact origins are unknown. Bob Brown re-recorded the song in 1990, releasing it on the independent label Kookaurra Records.

The song has become one of the most frequently recorded Australian compositions of all time and is a standard in Australian folk music. A variety of artists have covered it, ranging from bush bands like Paradiddle to international superstar violinist André Rieu, who included it on his 2008 album Waltzing Matilda. John Williamson performed Gumtrees at the 2006 memorial service to commemorate popular Australian wildlife expert and TV personality Steve Irwin; the program was followed by a worldwide television audience reputedly numbering 300 million viewers.

Co-writer Wally Johnson died of pneumonia in 1995. Bob Brown has continued writing and performing tongue-in-cheek folk songs, which have been covered by artists including John Williamson and folk singer Slim Dusty. One of Brown's numbers "I’m an Individual" was recorded by cult Australian Rules footballer Mark ‘Jacko’ Jackson, and became an Australia-wide hit. Brown has also recorded an album of children's songs called 'Riding Round on Golf Balls'.
. 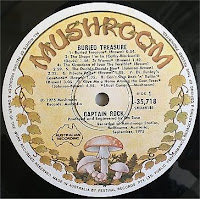 This post consists of MP3 (320kps) ripped from vinyl and includes limited artwork (sourced from the original Midoztouch Website with thanks) along with album and single label scans. If you're looking for something abit different and light hearted to listen to, then this album is for you. The album is full of catchy tunes but my favourite tracks are "Worms" and "Private Parts, and of course "Home Among The Gumtrees".
Also included as a bonus track is Captain Rock's 1981 single "I Do Love A Saturday Arvo" along with the naughty B-Side "Can We Do It Again"
.
Tracklist
01 Buried Treasure 0:54
02 The Shape I'm In 1:46
03 Worms 1:42
04 The Grandson Of Ivan The Terrible 2:59
05 The Doobie Doobie Hen 2:35
06 Private Parts 1:05
07 Dr. Funlay's Casebook 1:05 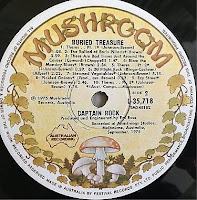 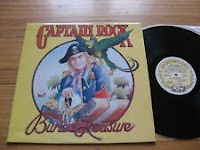 Posted by AussieRock at 8:35 PM