Before things get too serious at Rock On Vinyl, I thought it might be fun to post a song at the end of each month, that could be considered to be either Weird, Obscure, Cazaly or just plain Korny..... 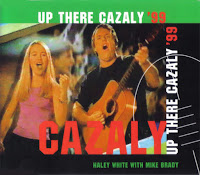 "Up There Cazaly" is a 1979 song by Mike Brady, written to promote Channel Seven's coverage of the Victorian Football League (VFL). It was first performed by the Two-Man Band, a duo of Brady and Peter Sullivan, and has since become an unofficial anthem of Australian rules football.

The title refers to early 20th century ruckman Roy Cazaly. Known for his prodigious leap, Cazaly formed a famous ruck combination with South Melbourne teammates Fred "Skeeter" Fleiter and Mark "Napper" Tandy. It was ruck rover Fleiter who was the first to call "Up there, Cazaly!" when the ruckman flew for the ball. The catchcry was soon adopted by South Melbourne supporters and eventually entered the Australian lexicon as a common phrase of encouragement.

Released independently on Fable Records, the Two-Man Band's recording of the song became the largest-selling Australian single released up to that time, with over 250,000 copies sold. The song has been performed at many VFL/AFL Grand Finals, often by Brady himself and performed it perfectly today at the 2019 Grand Final Premiership between GWS (Giants) and Richmond (Tigers).

In 1999, Mike teamed up with a relatively unknown singer Haley White to re-record the hit once again. Ozzi Music Man contacted Mike Brady in 2016 to enquire about Haley and this is what he had to say....

"Hayley White was just sixteen when she and I recorded a version of "Up There Cazaly" in '99. She had a manager and they worked hard on launching a career for her. I don't think it was particularly successful but I'm sure she's still trying. I hope so."

This month's WOCK on Vinyl post is a little early because I wanted to pay tribute to Mike Brady (for providing so many inspirational performances at our AFL Grand Finals and getting more than 100,000 people singing this sporting anthem) and to the 2 teams who battled it out for the AFL Premiership Cup today. Congratulations to the Richmond team for their win and commiserations to Greater Western Sydney who were playing their first Grand Final and showed great courage.

And so, the C in WOCK is for all footy players who aspire to be like Cazaly, striving to to their best for their footy team and fans, and demonstrating great Courage, even when the chips are down.