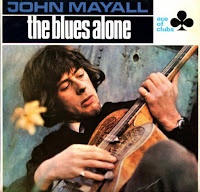 John Mayall was the leader and musical prodigy of the British Bluesbreakers Band which featured some of the most successful rock musicians of the '60s and '70s. Celebrated for his legendary songwriting ability, Mayall was, as well, a remarkable performer.

This recording is truly Mayall's blues alone. Recorded in London at the Decca studios in May of '67, this CD was co-produced by Mike Vernon and Mayall. It was engineered by David Grinstead and Gus Dudgeon and spent five weeks on the Billboard charts in the summer of '68.  The cover art and the original LP sleeve design are by John Mayall. Sleeve notes, including track notes, were written by noted DJ John Peel (see below). 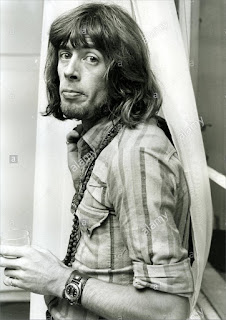 With a release coming only two months after Crusade, The Blues Alone, the first Mayall “solo” album (i.e. without The Bluesbreakers), was John Mayall’s third album of 1967, or fourth, if you count the various artists compilation Raw Blues. Like Raw Blues, it was released initially on Decca’s discount Ace of Clubs label to distinguish it from a regular Mayall album, although the distinction has been lost over time. It was actually recorded p
rior to Crusade on May 1, 1967. Mayall played and overdubbed all instruments except drums, which were handled by Bluesbreaker Keef Hartley, which was one way of dealing with his ongoing personnel difficulties (by this time, his bassist, John McVie, had left to join Fleetwood Mac).

It also served notice that, despite his band being a spawning ground for several British stars by now, the real star of the group was its leader. But it didn’t quite prove that, since Mayall, while certainly competent on harmonica, keyboards, and guitars, doesn’t display the flair of an Eric Clapton or Peter Green, and the overdubbing, as is so often the case, robs the recording of any real sense of interplay. (The Blues Alone hit #24 in the U.K. and #128 in the U.S.) 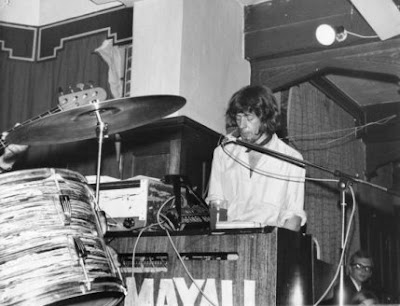 Celebrated “Underground” disc jockey John Peel, who'd achieved popularity with his late-night “Perfumed Garden” show on the pirate Radio London, was embraced by Auntie after the pirates were scuttled, and worked for many years on BBC Radio 1. He wrote the quirky sleeve notes, in a track-by-track breakdown you may find familiar, and I'm presenting them here:

[Liner notes by John Peel]
In the summer of  1966, I was working for a radio station in Southern California and, in my capacity as  resident Englishman  and  therefore  intimate friend of alt groups, I had to contribute a column of light hearted chatter about the British  music scene to the station  paper. 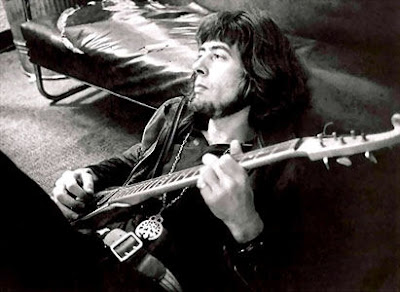 Part of this column was a listing of the current  British top ten.  As far as the inhabitants of San Bernadino and Riverside counties knew John Mayall's Bluesbreakers had a string of enormous hits during that summer - a number of them being, in some curious fashion, LP tracks. Chart-rigging was a hideous reality in unsuspecting California. 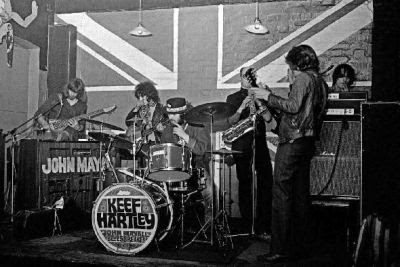 Shortly after returning to London, I met John Mayall and found him to be a very warm-hearted person despite his somewhat  forbidding  stage presence. He has a huge laugh that springs from some deep recess within him and tumbles into all corners of the room. I was featuring his LP 'A Hard Road' (Decca LKA 4853) on the air and was amazed that, in addition to writing 8 of the 12 numbers on the record, playing 5 and 9 string guitar, organ, piano, harmonica, and singing, he had written the sleeve notes and painted the portrait of the group on the front cover. With this new LP he has carried all of this to its logical conclusion and has produced a record featuring  no other musician than himself except for the occasional aid of his drummer Keef Hartley. This then is John Mayall - one of the greatest bluesmen in the world.

PLEASE DONT TELL
(Vocal,  harmonica, guitar,  bass)
John has apparently  uncovered something new in the popular field of male/female  relationships — after exhaustive research — and wants to keep it a secret. In his writing he always adds something fresh and interesting to traditional concepts — whatever that means. 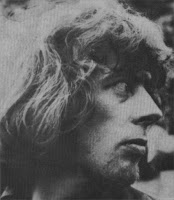 DOWN THE LINE
(Vocal, piano, 9-string guitar)
In the clubs the appearance of the Mayallian nine-string is greeted with shouts of approval. On this number the distinctive  sliding  sounds  keep up an almost unbearable tension  behind the sparse  piano. A searing, incredibly lonely sound.

MARSHA'S MOOD
(Piano, drums)
A portrait of an attractive and independent girl. I think I know the Marsh of the title and if I'm right then this superb piano solo fits her well.

NO MORE TEARS
(Vocal, 9 & 6 string guitars, bass)
A  great track featuring John's obviously underrated guitar. Although his efforts are unlikely to start a mass movement of blues guitarists to the bridges of the Thames this should be a revelation for those who've tended to concentrate more on John's celebrated  lead guitarists than on the man himself. I'm glad he recorded this one.

CATCH THAT TRAIN
(Harmonica with train) Blues  harmonica players favour trains to a degree where they might be suspected  of a locomotive fetish — a rare condition. This must surely be the first time that an  actual train has been used as an accompanying instrument. All of this poses an interesting demarcation question — did the N.U.R. receive recording  wages? Incidentally I  am the train's agent so don't get any ideas.

CANCELLING OUT
(Vocal, piano, organ) We all know the  'Put-together  girl - probably one of the main causes of international confusion. John sings of his intention to cancel out that kind of chick. He underlines this laudable decision with grumbling bass figures on the  piano  and  fiery organ playing.  Is this a protest song?

HARP MAN
(Harmonica, celeste, bass)
Music-Box type celeste sounds -— a very emotional music-box let me  hastily add — and wandering harmonica phrases.
There is no truth to the  rumours that the Bluesbreakers will be using dulcimer, sackbut and psaltery. Let's face it, gutteral cries of   "Let's hear your sackbut, son" can only lead to violence.

BROWN SUGAR
(Vocal,  piano,  guitar,  organ) You don't need me to tell you what this is all about. Just listen to the lyrics. More slide guitar playing Tate and Lyle. 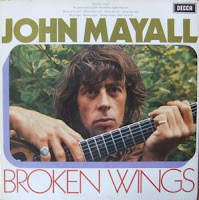 BROKEN WINGS
(Vocal, organ)
This is the sort of thing that be heard on the car radio late at night driving  alone  in  the  rain.   A  very gently, caressing and beautiful song. You needed to know this side of John Mayall.

DON'T KICK ME
(Vocal, organ, piano, guitar, baas)
For the final track on this astounding LP, which shows every facet and talent of the limitless John Mayall, a rumbling plea not to kick him when he's down. I get the impression you'd be in a rather dramatic situation if you tried it.

Thank you, John, for letting me write these notes for what is an essential record for anyone with any interest in any kind of good music - especially the Blues  [John Peel]
.

This post consists of a freshly ripped set of FLACs taken from my prized vinyl which I have owned for yonks (that's ages folks).  Not sure where I bought it - secondhand I think and still very playable. I have taken the time to manually remove pops and crackles and applied a small amount of bass enhancement on some tracks.  Although I don't have a lot of Mayall's material in my record collection, I hold the greatest respect for this Master Bluesman, as did John Peel based on his liner notes.
.
Tracklist
A1 Brand New Start 3:22
A2 Please Don't Tell 2:30
A3 Down The Line 3:43 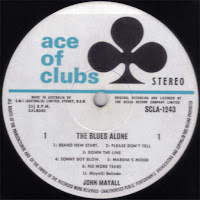 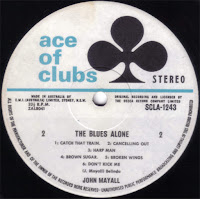