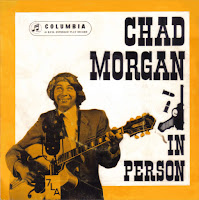 Chadwick William “Chad” Morgan was born in Wondai, Queensland in 1933 and raised by his grandparents. He was discovered through Australia’s Amateur Hour radio program and started recording with Regal Zonophone ( a subsidiary of EMI ).

Chad, known fondly as “The Sheik of Scrubby Creek”, released his first album in 1952 was renowned for his vaudeville style of comic country and western songs, and goofy stage persona. Chad is the ultimate comic of Australian country music. He was instantly recognisable with his unique trademark – Those Teeth!

Chad was awarded a Lifetime Achievement award at the 2010 CMAA Country Music Awards of Australia, the first person to be honoured with this award. A bronze bust of Morgan was unveiled in Tamworth's Bicentennial Park in 2017. 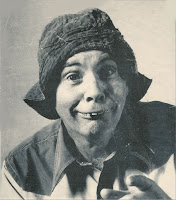 [Liner Notes: Eric Scott 7LA Radio Station, Tasmania]
Although it was no new experience to hear applause of the "roof lifting" calibre emanating from the National Theatre, Launceston, I was amazed at the reception given Chad Morgan, the "Sheik of Scrubby Creek", on his first visit to our city in August, 1961. It was Saturday the 26th, one-night that will be remembered well by the almost one thousand cheering, laughing fans being kept in stitches by the sheer roguishness of Australia's most well known country music comedian-showman.

As the theatre was filling, Chad Morgan was, to most, just a well known voice and name on radio and records; but the happy faces and bubbling chatter after the reluctant final curtain were a clear indication that to the entire audience, the "Sheik of Scrubby Creek" was now a living personality and more importantly, perhaps, a friend.

You weren't there? Ah, well, maybe you will be able to catch some of the enthusiasm of Chad and his fans as you listen to this live record, which is a small part of that memorable evening's show.
. 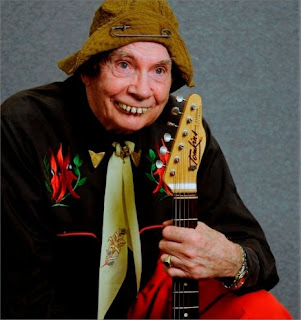 This month's WOCK on Vinyl post is more of a tribute rather than an attempt to take the piss out of a Weird looking bloke. Yes, his buck teeth were not something you'd expect to see on a Country and Western artist, but they did make him a star as did his comical antics while performing on stage.
If you listen carefully to the audience on this live EP, they are constantly laughing throughout his performance and one can only imagine what mischief he was getting up to while singing some of his greatest hits, especially his #1 hit "Sheik Of Scrubby Creek".

So folks, I formally tip my hat to the 'Sheik Of Scrubby Creek' for ticking all of the boxes - for being Weird, Crazy, and Korny - and this EP most certainly being Obscure (not even Ebay has it for sale).  My copy came from that box of old 45's that was given to me by a mate (a collection of 45's that his late father had collected over his lifetime). Thanks Ian 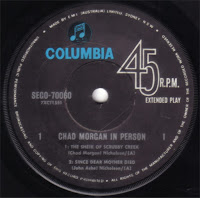 Ripped to FLAC from vinyl, full album artwork and label scans included. Recorded in Launceston (Tasmania) during a performance of the Athol McCoy Show in 1961.

Posted by AussieRock at 9:53 PM